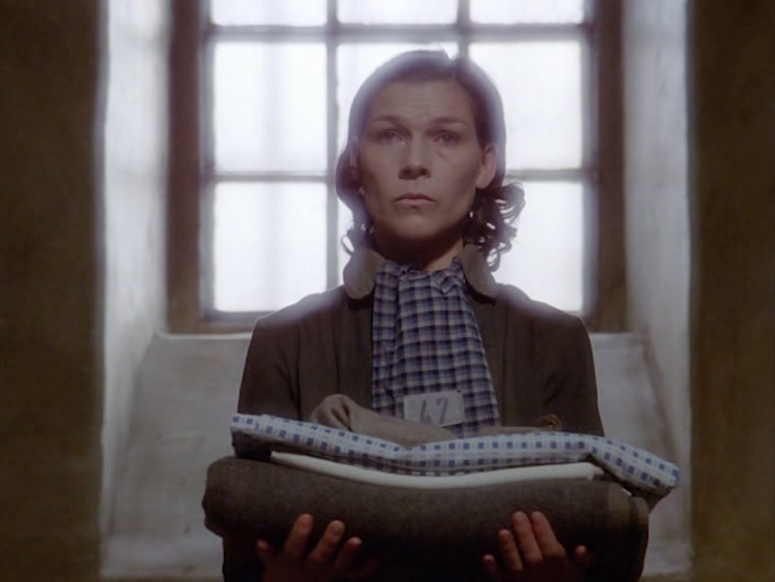 The Fiancée (Die Verlobte) is a grim film that offers very few moments of levity during its hour and forty-five minute running time. It’s a women-in-prison film, but has nothing in common with the likes of Caged Heat, 99 Women, or the dozens of other women-in-prison films of the sixties and seventies. There is nothing salacious here—just the grim reality of life behind bars in Nazi Germany.

The film follows the ten-year imprisonment of Hella Lindau (Jutta Wachowiak), an anti-Nazi resistance fighter who is arrested after a botched attempt to hand money over to the resistance. Hella suffers through solitary confinement and abuse by other inmates as well as the guards, enduring it all for the day she’ll get out and be with her fiancé Hermann Reimers (Regimantas Adomaitis) again. Hermann is playing a dangerous game, getting cozy with Gestapo official Hensch (Hans-Joachim Hegewald) to improve Hella’s living conditions.

The film doesn’t rely on simple caricatures for the people at this prison. The warden has a secret socialist past, and the guard who is the nicest to Hella happily moves up in the Nazi ranks when she has a chance. Through it all, Hella stays resolute and never betrays anyone, but meanwhile, Hensch is keeping an eye on Hermann. 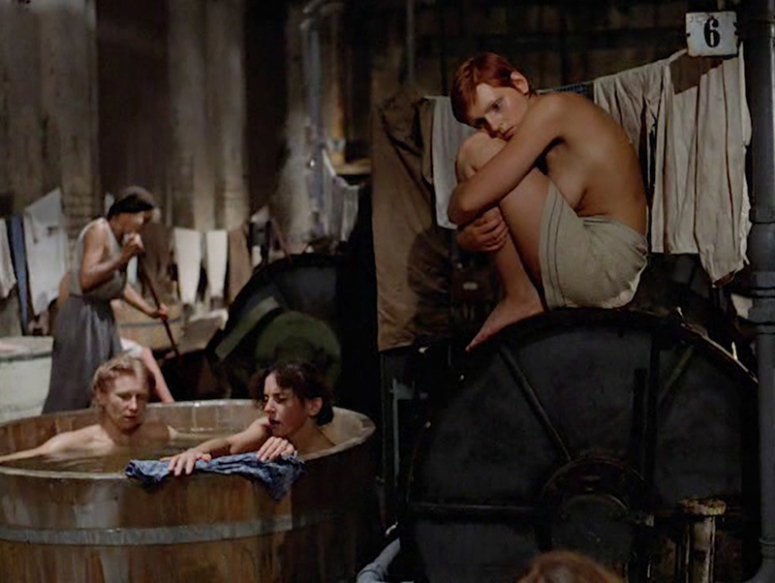 The film is based on Haus der schweren Tore (House with Heavy Gates) and Leben, wo gestorben wird (Living Where Death Is), two autobiographical novels by author Eva Lippold. The books were part of intended trilogy that she never completed. Considering that the first two books were published in 1971 and 1974, and that Lippold didn’t die until 1994, its clear that the last volume was proving to be a bit of a problem for her. Lippold was born in Magdeburg in 1909. She started working as a shorthand typist when she was still a teenager, and joined the German Communist Party (KPD) when she turned eighteen. She worked for a while as a typist for the KPD newspaper Tribüne, where she met Hermann Danz, the inspiration for Hermann Reimers. Lippold was arrested in 1934 and sentenced to nine years in prison. She was released in 1943 and assigned to forced labor at an armaments factory. She was arrested again in 1944 for being a member of the Saefkow-Jacob-Bästlein Organization, an underground communist organization in Nazi Germany. After the War, she became highly active in the Soviet sector as a member of the SED. Lippold lived long enough to see the collapse of the DDR and the reunification of Germany. She had been an ardent supporter of the SED, so this must have been a bitter pill to swallow.

The film was co-directed by Günter Reisch and Günther Rücker, which is an odd combination. Reisch was one of the deftest filmmakers to come out of DEFA. He had a light touch and a way of making even the most serious subject bearable. His films about German Communist Party co-founder Karl Liebknecht (As Long as There Is Life in Me and In Spite of Everything!) would have been dull affairs in the hands of almost any other filmmaker, but he keeps things interesting and entertaining. His 1978 film Anton the Magician would have been nominated for a foreign film Academy Award had it come from West Germany. Reisch died on February 24, 2014 and is buried in the French Cemetery (Französischer Friedhof) in Berlin.

Günther Rücker, on the other hand, was better known as a writer with a penchant for the grim. He wrote the scenarios for Until Death Do Us Part and The Gleiwitz Case, two of the grimmest movies to come out of the GDR. Along with screenplays, he also wrote several successful radio plays and novels. Rücker was born in 1927 in Reichenberg (Liberec), Czechoslovakia, a town that was heavily populated by Germans prior to World War II.1 He studied theater at the Theaterhochschule Leipzig and got his start writing plays for the radio. After the Wende, it came out that he had been working as an Inoffizieller Mitarbeiter (informer) for the the Stasi. After that Rücker retired from public view although he continued to write. Rücker died in Meiningen in 2008. 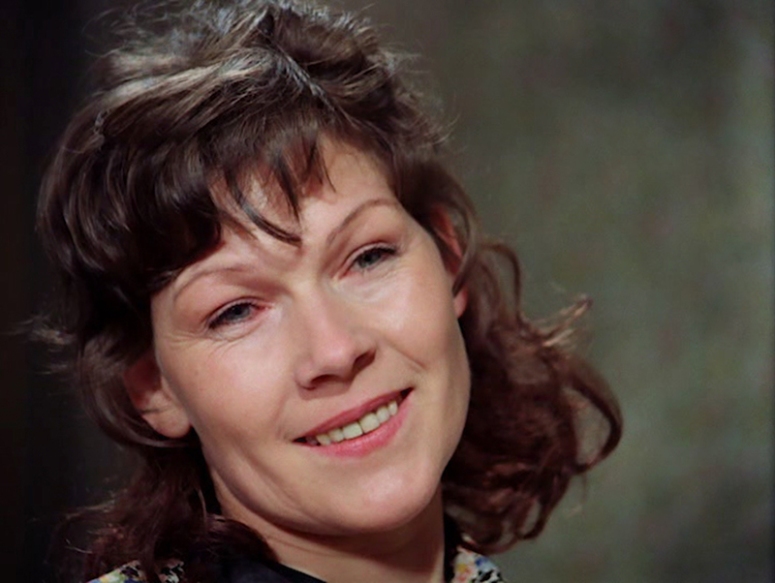 In spite of the seeming differences between these two men, Reisch and Rücker worked together throughout their careers, starting with Reisch’s first film, Junges Gemüse (Young Vegetables), right up through The Fiancée.

As Hella Lindau, Jutta Wachowiak turns in the performance of a lifetime. Wachowiak was trained as a stage actress, but has worked in film and on television since 1961, She had a small role in On the Sunny Side and did an uncredited turn as Marianne in The Baldheaded Gang. From there, she went on to appear in several DEFA films but it was The Fiancée that finally gave her the credit she deserved. In 1986, she impressed critics on both sides of the border with her performance as Käthe Kollwitz in the film of the same name. This would be the last time we’d see Wachowiak in the lead role in a feature film. Since the Wende, most of her work has been in television, or in smaller roles in features. 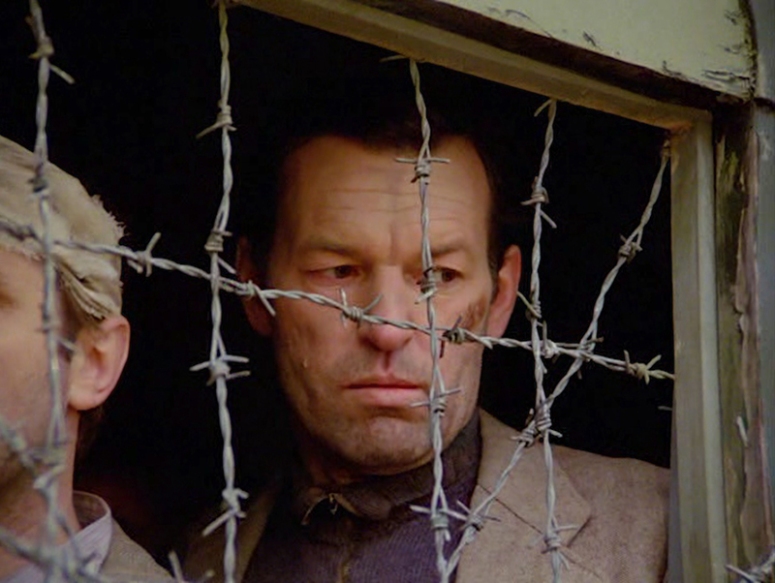 Playing Lindau’s fiancé is Lithuanian actor Regimantas Adomaitis. Adomaitis had worked with Günter Reisch previously on Wolz – Life and Illusion of a German Anarchist. His film career started in the sixties, but made his first big splash in That Sweet Word: Liberty! (Это сладкое слово). In 1988, he helped found Sąjūdis, a political reform group bent on putting Gorbachev’s glasnost and perestroika in action in Lithuania (East Germany wasn’t alone in trying to ignore the changes going on around them). More recently, Adomaitis appeared in the 2008 Norwegian film Iskyss, a fictionalized account of Gunvor Galtung Haavik, who delivered state secrets to the Soviet Union out of love for a Russian former prisoner of war.

Despite the film’s grimness, The Fiancée did well at the box office and was lauded by critics on both sides of the border.

1. After the War, nearly all Germans were were either kicked out or killed—at first, by vigilante groups and then as part of a official decrees by President of Czechoslovakia Edvard Beneš. The exact number of Germans killed during Czechoslovakia’s forced expulsions is still debated. Estimates run from 15,000 to 270,000, depending on whose counting.