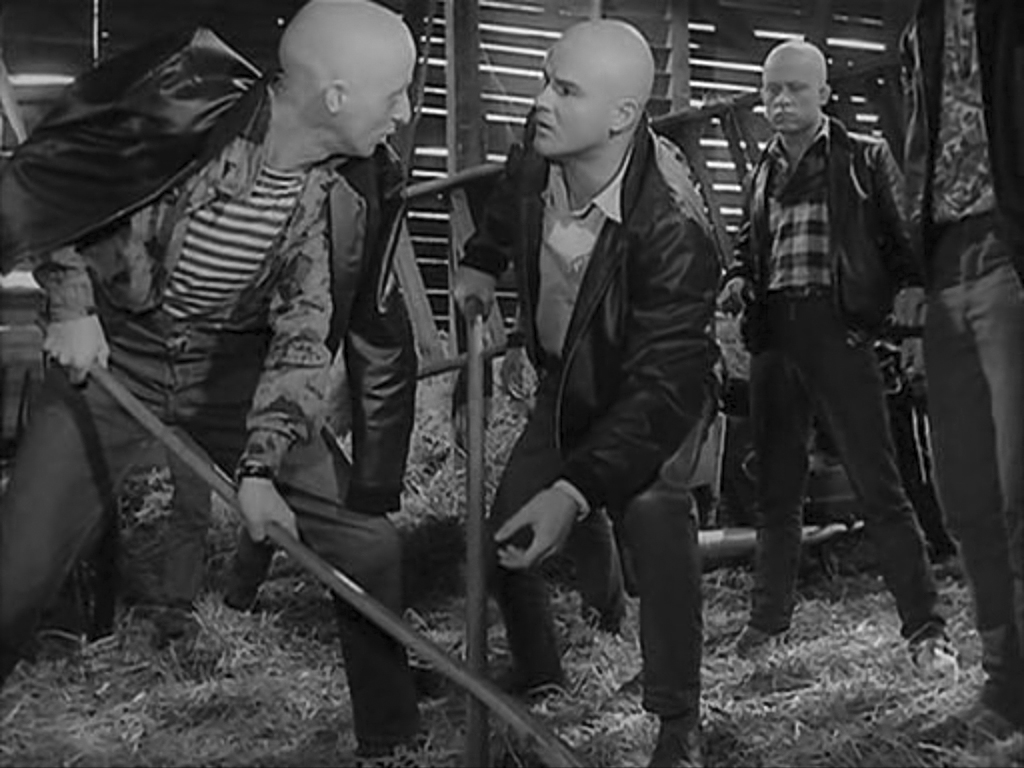 The Baldheaded Gang (Die Glatzkopfbande) is East Germany’s only biker film, and a possible precursor to the skinhead movement. Made in 1963—a full three years before Roger Corman kick-started the biker genre with The Wild Angels—the film follows the story of a gang of bikers who cause trouble at a vacation spot on the Baltic Sea. In this respect, it resembles Laslo Benedek’s classic The Wild One. Like The Wild One, it is based on an actual event; and also like The Wild One, the true story is far different than the one portrayed on screen.

The film was made shortly after the wall went up and was intended to demonstrate how the wall would protect the citizens of East Germany from West German carpetbaggers. This was a common theme in DEFA films at that time. The villain in the movie is a man called “King,” an ex-foreign legionnaire who hails from West Berlin (of course). King leads a motorcycle gang whose shoddy work at a construction site was responsible for the deaths of two people. A police lieutenant named Lothar Czernik is called onto the case. Czernik is an odd bird. He seems to have a strange three-way relationship with his pretty next door neighbor, Marianne, and his dog: an enormous German Shepherd that often steals the show. The dog hangs around with the woman during the day, and then returns home to Czernik for dinner. Rather than simply cross the yard to visit her, Czernik likes to call Marianne on the phone and stare at her through the window. He also likes to let the dog bark at her over the phone. This is one of those movie relationships that aims for cute but achieves disturbing instead.

The Baldheaded Gang gets off to a rollicking start with Helmut Nier’s percussive jazz score over artfully jagged titles, followed by a gang of motorcyclists tearing down a country road. Contrary to many descriptions of this film, the gang members are not riding mopeds, but their little bikes aren’t exactly Harleys either. At the beginning of the film, the gang members are hirsute, but later shave their heads in imitation of King’s personal hero, Yul Brynner.

At the seaside resort of Bansin on Usedom, an island in the Baltic Sea, the gang proceeds to piss off everyone in sight, kicking over children’s sand castles, interfering with various games, and generally acting like your standard biker bad boys. During an evening affair at the local rec hall, the gang’s behavior leads to a fracas that quickly gets out of hand. Later that evening, after assaulting two vacationers who have been dogging them since the beginning of the movie, the gang learns what happened at the construction site and tries to get out of the country, only to find the way blocked thanks to the valiant efforts of the GDR to protect their borders.

The film was a hit when it was released, and went on to become one of the most popular films in DEFA’s history. To the dismay of the authorities, some teens seemed to miss the cautionary point of the tale and identified with the troublemakers. As a result, the film was eventually pulled from theaters in spite of its popularity. Whether or not any young rebels were inspired by the film to shave their heads and act up is not documented, but could it be that this minor spate of GDR rebelliousness trickled through the underground, surfacing in England in the late sixties as the skinhead movement? It certainly seems plausible.

Although you can make a strong case for this film being the precursor to the entire biker genre, in style it is closer to the juvenile delinquent films of the fifties. For one thing, it is black-and-white with a bebop jazz score. It would take Roger Corman with Dave Allen and the Arrows to add electric guitars to the sounds of motorcycles. For another, the perspective is that of the authorities. Very little is done to build sympathy for the gang members. Only the spineless Piepel arouses any sympathy for he has paid the highest price of all.

As the evil “King,” Thomas Weisgerber is effectively menacing. Particularly interesting is Rolf Römer, playing Johle—one of the odder, more aggressive members of the gang. With hair, Rolf Römer resembles Cash Flagg (Ray Dennis Steckler) of Incredibly Strange Creatures fame, but without hair he looks like Michael Berryman in The Hills Have Eyes. Also worthy of note is Irene Fischer, who plays the peroxide blonde, Jackie to slatternly perfection. She would be right at home in any juvenile delinquent film from the United States.

Although the movie is based on an actual event, the true story is far different from the one portrayed on the screen. In reality, the event took place a few days before the wall was built. Seven young men were arrested for playing rock’n’roll, which was seen by the authorities as a threat to civilization (the word Unkultur gets bandied about here, but it doesn’t translate well). Five of the young men had shaved heads, but they did not know each other. After their arrest, the people at the Bansin campground marched to the police headquarters. Some were there to protest the arrest of the men, but most were there to complain about the lack of amenities. The authorities over-reacted (as authorities often do) and the men were charged with an attempted putsch—a word laden with sinister overtones thanks to Adolph Hitler. The fact that five of the men had shaved heads attracted the media’s attention and they become known as die Glatzkopfbande. The court was hard on them, sentencing them to 27 years altogether, with eight years for the main defendant. After being released from prison, some of the men did exactly what their characters in the film were trying to do: they went west.

In 1965, Richard Groschopp followed up the film with Entlassen auf Bewährung (Released on Probation), which continues with the story of Conny Schenk, a peripheral character in The Baldheaded Gang, who initially abets the gang but then later helps the police run them in. In 2001, the 45-minute documentary film about the actual incident—»Revolte« am Ostseestrand (“Revolt” at a Baltic Sea Beach) by Jürgen Ast and Inge Bennewitz—was shown on German television. In 2004, Vorpommern Theater produced Glatzkopfbande. Erinnerung an Rock ’n’ Roll (The Baldheaded Gang, a Memento of Rock’n’Roll), a theater piece based on the story.

By the time DEFA was founded, Richard Groschopp had already made a name for himself filming documentaries and training films for the Third Reich. As a cameraman, he worked with Leni Riefenstahl on her classic, Olympia. After the war, he started with DEFA by making short films. During the fifties he helped create the “Das Stacheltier” group, which specialized in producing short, humorous films that were shown along with newsreels before the main features at cinemas. Groschopp began directing feature films in the late fifties and had a big hit with the romantic comedy, Die Liebe und der Co-Pilot (Love and the Co-Pilot). But his biggest hit came in 1967 with the Indianer classic, Chingachgook, the Great Snake. This would be his last feature film. After a few TV movies, Groschopp retired in 1971 at the age of 65. He died in 1996.

Whether there are any plans to release this film in the United States, I do not know, but I certainly hope so. This film has been missing from the biker film narrative for too long.

4 thoughts on “The Baldheaded Gang”