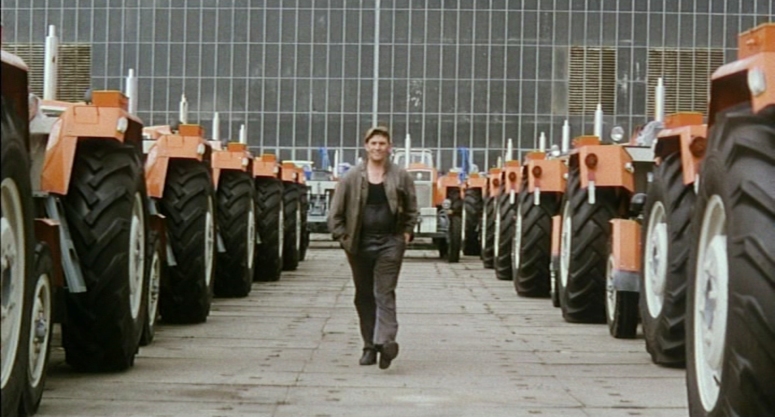 Of all the surprises that East German films bring to American viewers, the biggest one—excluding the psychedelia of In the Dust of the Stars, which is guaranteed to make anyone’s head explode—is how dark the humor in their comedies can be. Of course, the target for this kind of comedy is nearly always western-style capitalism and the avariciousness of its followers, but in black humor there is an inherent, if unspoken, acknowledgement that people are the same everywhere: corrupt, easily manipulated and foolish. These films may not point directly at the SED, but, as the saying goes, whenever you point at someone, three fingers point back at you.

Anton the Magician (Anton der Zauberer) has plenty to say about the corrupting effects the pursuit of money can have on a person, but it also says something about the ability of any huckster to game a system, whether it’s communist or capitalist. The film is the picaresque tale of Anton Grubske, a clever mechanic whose love of cars, women, and booze continually get him into to trouble. The story is told as a flashback, starting with Anton’s funeral then jumping back to his birth. We follow Anton’s story through his teenage years, the war, its aftermath, the early years of the GDR, and right through the building of the Wall, which plays an important part in this story.

Anton is portrayed as a sly man with a likable personality and a way with all things automotive. After narrowly escaping emprisonment by the Russians, he joins in a pecuniary—and sometimes sexual—partnership with Sabine, the owner of Zum verwunschenen Ritter (The Enchanted Knight), a bar that is named after its primary attraction: a mummified knight on display in a small chapel next to the bar. The knight figures prominently in the story. Anton returns to it often, and it is even used as part of a local parade. The metaphor isn’t subtle. Anton is the knight, and the adjective—verwunschenen, which can be translated as either “enchanted,” “accursed,” or “haunted”—certainly applies to him as well. 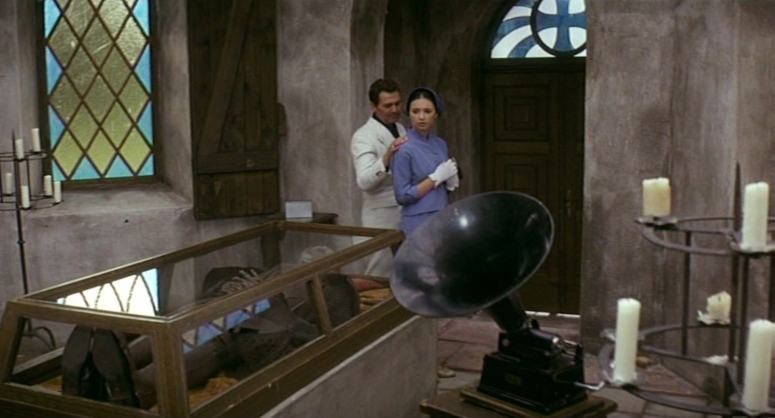 Anton the Magician is a morality play with the full spectrum of moral viewpoints on display, from the religious piety of Anton’s wife Liesel, to the avaricious amorality of Sabine. It is between these extremes that Anton is buffeted. At first, he sides with Sabine, who helps him create a black market business for tractors built from the remains of old Wehrmacht vehicles. This enterprise makes him so much money that he has to hide it from the state. He and Sabine sneak across the border with the money to deposit it in a West German bank. When the wall is built, Anton finds himself cut off from his funds. To make matters worse, Sabine takes the money out of the bank and runs off to Switzerland. Anton is thrown in prison for his black market business after one of his customers rats him out, not out of civic duty, but because Anton gave the tractor that was suppose to be his to another customer with more money.

While in prison, Anton starts reading Marx and Engel and is reborn as a loyal citizen. His knowledge of automotives makes him invaluable to the state as he helps the local Volkseigener Betrieb (VEB: publically owned business) reach their tractor quota. Anton goes from shady black entrepreneur to local hero. When Sabine dies in an accident, Anton gets what’s left of the money back, along with her 1964 Chevy Impala, which Anton uses to take out his anger and frustration in a scene that is funny, but slightly horrifying if you’re an old car enthusiast.

Anton the Magician was directed by Günter Reisch, who also gave us Oh How Joyfully…, and Wie die Alten sungen…. He specialized in comedies that were utterly East German, right down to their warp and woof. Much of the humor in his films is invariably lost on those of us in the west and Reisch wouldn’t have it any other way. If reports are correct, he was even a little testy about us Yankees daring to enoy his films. This doesn’t make them any less entertaining, and Reisch’s talent as a filmmaker cannot be denied. Although he is best remembered for his comedies, he could make a drama with the best of them, as proved in his 1980 film Die Verlobte (The Fiancée), which he co-directed with Günther Rücker. Reisch died in February 2014 and is buried at the French Cemetery (Französischer Friedhof) in Berlin (for more on Reisch, see Oh How Joyfully…). 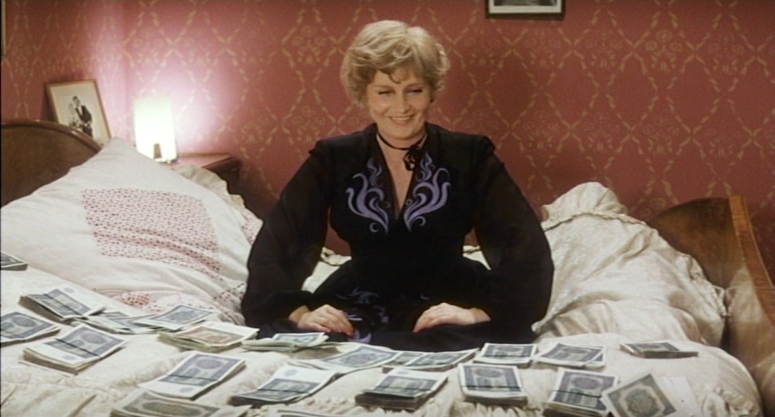 Like Günter Reisch’s other films, Anton the Magician has a dream cast. It stars actor/director Ulrich Thein, who is perfectly cast as the impish Anton. It’s no surprise that he won the best actor awards at the Moscow International Film Festival and Eberswalde Film Festival for his performance in this film, and he probably would have won some West German awards as well if not for the politics of the time (for more on Thein, see Star-Crossed Lovers). On a par with Ulrich Thein is Barbara Dittus, who plays the sexy and avaricious Sabine. Dittus looked like a movie star, and her delivery was the best—especially when playing lusty characters like Sabine in this film and Lucie in Her Third. The always dependable Erwin Geschonneck appears as Anton’s patient father in an unusually small role. Also making a brief appearance as Anton’s lawyer is Reisch’s favorite character actor, Marianne Wünscher, who played the annoying neighbor in Reisch’s Christmas comedies, Oh How Joyfully… and Wie die Alten sungen…, and is well-remembered as the nasty lady with the poodle in Beloved White Mouse.

I’ve discussed all of these actors in previous posts on this blog, so I’ll direct my attention here to the two relative newcomers, Anna Dymna and Marina Krogull. Anna Dymna played Liesel, Anton’s pious wife. Dymna, a Polish actress, had planned on studying psychology, but ended up at the Ludwik Solski Academy for the Dramatic Arts instead. She started appearing films while she was still attending classes at the school. Thanks to a recurring part in the popular Polish TV show, Janosik, and appearances in the comedies, Nie ma mocnych and Kochaj, albo rzuć (Love or Leave), Dymna was already a well-known actress in Poland by the time she did Anton the Magician. 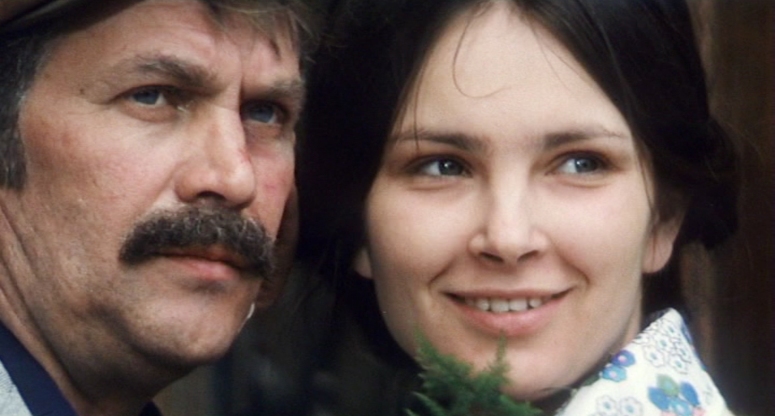 Dymna made many movies in Poland, and the transition away from communism had little effect on her career. She has won awards, both for her acting and her humanitarian efforts. In 2003, she founded Mimo Wszystko (Against the Odds) a charity organization geared toward improving the lives of the sick and disabled. Of late, she has been devoting more of her time to her charity work than acting. Her last film was the 2011 drama, Fear of Falling (Lek wysokosci), which was directed by Bartosz Konopka, who gave us the delightful documentary, Rabbit à la Berlin.

Marina Krogull plays Sabine’s daughter Ilie. Although her part in the film is considerably smaller than the other leads, hers is the most psychologically complex character in the film short of Anton himself. Many of the scenes with her show a young woman observing her mother and trying to follow in her footsteps. In this sense, the character of Ilie seems as doomed as Anton.

Krogull started her career as a ballet student, but switched to acting in the mid-seveties, starting her film career in 1975 with Kurt Tetzlaff’s Looping. She continued acting after the Wende, and was, like many other East German actors, a regular on the TV hospital drama, In aller Freundschaft. She has appeared on nearly every popular German TV show at some point or another, for Edel & Starck to Wolffs Revier to Tatort and SOKO Wismar. She is also a very popular voice actress in Germany, and has done the German dubbing for everyone from Marilyn Monroe in Don’t Bother to Knock, to Cynthia Nixon in Sex and the City.

The mummified knight is based on a real corpse. that of Christian Friedrich von Kahlbutz, whose body is on display in the Kampehl district of Neustadt (Dosse), Brandenburg. The knight is notable for the remarkable state of preservation of his body without any mummification process involved. Local legend has it that his unusual state of preservation is due to his false testimony in court while he was being tired for the murder of a local shepherd. Von Kahlbutz supposedly said in court, “If I’m the murderer, then, by God’s will, my body will never decay” (“Wenn ich doch der Mörder bin gewesen, dann wolle Gott, soll mein Leichnam nie verwesen”).

Anton the Magician was a popular film upon release. Its dark humor suited the East German public, and its attitude toward the west suited the film board. Its jibes at capitalism probably didn’t help it get international distribution, which is unfortunate. Of all Reich’s comedies, this one is the most deserving of more attention.