Kunz (Karl-Heinz Rothin) is a lazy miller who prefers to let his assistant Hans (Reinhard Michalke) do all the milling. When Hans can’t keep up and the farmers refuse to pay, the miller falls behind in his payments to the king. Kunz tells the king’s treasurer not to worry, because his daughter Marie (Karin Lesch) can spin straw into gold. The king locks Marie up in the castle and forces her to prove this claim. Faced with the impossible task, the young woman despairs until a little man appears and offers to help her. He just asks for a few things. His requests start small but things escalate when the little man asks for Marie’s first-born child.

As the movie’s title indicates, Rumpelstiltskin is based on the classic fairytale by the Brothers Grimm. A literal translation of the movie’s title from German would “The Little Magic Man” (Das Zaubermännchen) not Rumpelstilzchen—the German title of the story. The name change is not a whim. The film is based on a stage play that takes enough liberties with the original to make it a different story. In the Grimm’s version, Rumpelstiltskin is a nasty piece of work who gets his comeuppance in the end. In some versions of the story he tears himself to pieces, in others he simply runs away.

In DEFA’s version of the little man is the good guy. While Rumpelstiltskin does spin straw into gold, he also cautions Marie that the road to happiness has nothing to do with wealth. When he comes to get Marie’s baby son, he says it is because he doesn’t want the child to grow up surrounded by such greedy people. In the original story, Rumpelstiltskin’s true name is discovered after a friend of the Miller’s daughter has a messenger follow him into the woods and the messenger hears him singing. In this one, it’s more of a community effort, but it’s still Marie’s best friend who finds out the little fellow’s name. When confronted with his name, the little man merely wags his finger, satisfied that everyone has learned his lesson about the dangers of pursuing wealth.

Rumpelstiltskin was directed by Christoph Engel. Engel is better known as an actor. This film is his only credit as director. Perhaps after this exercise, Engel decided that directing wasn’t really his thing. It is acknowledged that the film’s cinematographer Erwin Anders had a lot to do with getting the film finished. Like most of the better cinematographers at DEFA, Anders got his start working in a photo lab. During the Third Reich years, he oversaw the Zeiss-Ikon facility in Dresden. After the War, he started working as a cinematographer, under the tutelage of master cinematographer Karl Plintzner. Anders was a talented cinematographer who strove for a natural look and avoided the over-saturated colors of Plintzner’s fairytale films. He might have had a longer career in films, but he didn’t start working for DEFA until he was nearly fifty. He died in 1972.

The Miller’s daughter is played by Karin Lesch, who made a few films for DEFA, but primarily worked in theater. Lesch comes from a long line of performers. Her mother was the Mathilde Danegger, who often played kindly grandmothers in DEFA films. Her grandparents and uncles were also actors in Austria. The daughter of Swiss theater and movie director Walter Lesch, Karin grew up in neutral Switzerland, but after the War and her parent’s divorce, Karin and her mother moved to West Germany, but quickly left, repulsed by the West’s capitulation to former Nazi politicos and the demonization of socialism occurring there. Lesch was sixteen at the time. After training as an actress at the Staatliche Schauspielschule Berlin, (now the Ernst Busch Academy of Dramatic Arts), she started performing at the Potsdam Theater, and appearing in films. She is best known today for her role as the queen in Three Hazelnuts for Cinderella. Lesch retired from films in 1975, but continued to act on stage. After the Wende, she withdrew from public life. 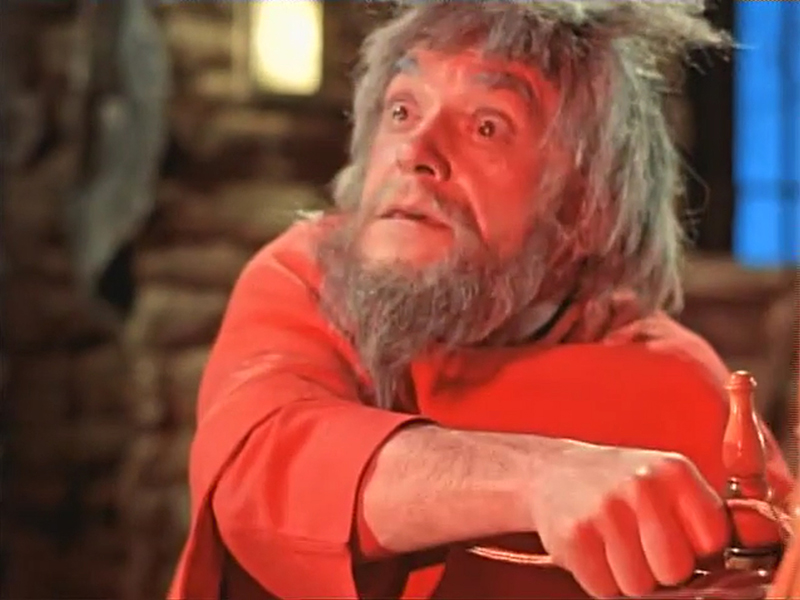 Rumpelstiltskin is played by Siegfried Seibt. Seibt got his start in theater before WWII working as a set designer. He attended Drama school in Breslau and appeared in several plays before and after the War. He started working for DEFA in 1957, and Rumpelstiltskin was his first major movie role. From here on out he would appear in dozens more features films and TV movies, including a turn as Rumpelstiltskin again in the 1979 TV mini-series Spuk unterm Riesenrad (Spook Under the Ferris Wheel). Seibt died in 1982.

It might seem like a film such as this with an obviously socialistic theme would fare badly in the West. Three years earlier, DEFA’s interpretation of The Brave Little Tailor (Das tapfere Schneiderlein) was roundly criticized for similar socialist messaging, but Rumpelstiltskin was a hit. The film proved popular enough to make it into the top fifty most popular films from the GDR. Attempts were made by the American children’s film producer Ron Merk to get this one distributed in the States, but the plans fell through. The film was eventually in a dubbed version released by Arrow Film Associates in 1974 under the title Rumpelstiltskin and the Golden Secret.