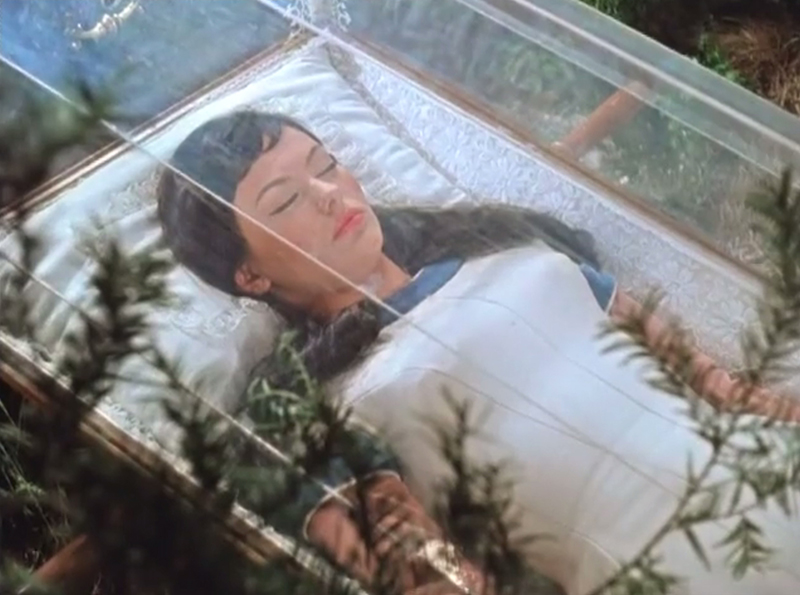 As discussed elsewhere on this blog, fairytale films were the closest thing to a cash cow the East German film industry had to offer. Beloved by East and West Germans alike and often featuring stories in which the poor and generous triumph over the rich and greedy, the fairytale film faced fewer hurdles when they were exported to the West. After all, didn’t Walt Disney—a man who hated socialism with an passion—also make films of these stories? It didn’t hurt that, with a few notable exceptions (Rumpelstiltskin and Sleeping Beauty come to mind) the DEFA film tended to follow the original fairytales much more closely than their Hollywood counterparts.

DEFA’s Snow White (Schneewittchen) is much more faithful to the original Grimms’ fairytale than Disney’s film. Right off the bat, the DEFA film starts the same way as the fairytale: A young queen is shown sewing next to an open window on a snowy day. The woman accidentally pricks her finger, and seeing the red blood on the white snow in the ebony window frame, thinks she would love to have a child with skin as white as snow, lips as red as blood and, hair as black as ebony. Soon after, Snow White is born, but the the queen dies and the evil stepmother enters the picture.

At this point, both the Disney version of the story and the DEFA version follow the fairytale closely, with the evil queen telling the huntsman to take Snow White into the forest and kill her, the huntsman having pity on the girl, and Snow White discovering the home of the seven dwarfs. Perhaps influenced by Disney, the dwarfs in the DEFA film also have a happy little song they sing whenever they’re marching to and from work. In the DEFA film, as in the original fairytale, it takes the evil queen three tries to kill Snow White. Disney’s evil queen, a model of efficiency, skips the tightening bodice and poisoned comb, and goes straight for the apple. In a way, this change by Disney is an improvement. After all, fool me once, shame on you; fool me twice, shame on me; but fool me three times, well, then I’m just an idiot. 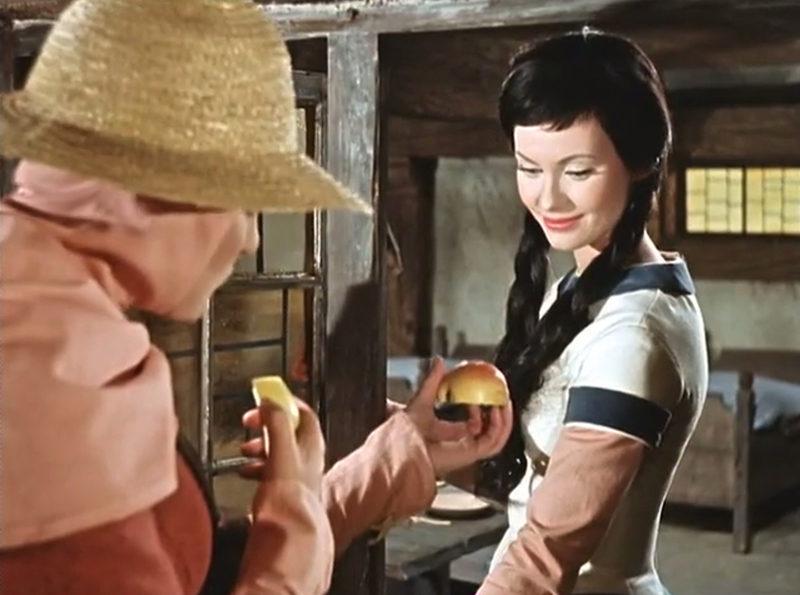 In the DEFA version, as in the original story, Snow White revives after the dwarfs stumble with her coffin and the piece of the apple is dislodged from her throat. There is nothing magical about the prince’s kiss. Both films differ significantly from the original story at the end, but that’s understandable. In the Disney version, the evil queen doesn’t even make it off the mountain, falling to her death while being chased by the dwarfs. In the DEFA version the queen comes to the Prince and Snow White’s wedding, and, upon seeing that her stepdaughter has survived, flees the country. In the original story, the queen also comes to the wedding but is met there with a pair of red-hot iron shoes that she is forced to wear and dance in to her death. This gruesome detail is omitted from later editions of the fairytale, so DEFA can be forgiven for also omitting it. Plus, it doesn’t do much to encourage continued sympathy for Snow White and her prince.

Snow White is directed by Gottfried Kolditz, one of East Germany’s foremost directors. If Kolditz’s output is any indication, the man loved genre movies. No other East German director has such a catalog of genre-specific movies. It includes musicals (Midnight Revue, Beloved White Mouse), westerns (The Falcon’s Trail, Apaches), science fiction films (Signals, In the Dust of the Stars), and, of course, fairytales (Mother Holly and Snow White). Kolditz graduated with a doctorate from the University of Music and Theater in Leipzig, which was founded as a music conservatory in 1843 by the composer Felix Mendelssohn. With this school in his background, it’s understandable that Kolditz stared working at DEFA as a music adviser. After directing a few short films for the “Das Stacheltier” group at DEFA, he stepped into the role of director, and quickly demonstrated his talent. Most of his early films were musicals, and nearly all of his films contain musical sequences, even the science fiction films. I spite of his tendency to avoid heavy message films and concentrate on films that, by anyone else, would be considered light fare, Kolditz’s film always carry a strong socialist message about the corrupting influence of power and greed, and the importance of teamwork. Kolditz died in 1982 in Yugoslavia.

The screenplay for the film is by Günter Kaltofen, who was just coming off a seven year stint as the chief dramaturge at the DFF (East Germany’s television station). Kaltofen practically made a career out of converting fairytales into screenplays. Along with Snow White, he provided screenplays for Rumpelstiltskin, Mother Holly, The Golden Goose, King Thrushbeard, and several other children’s films. Born in Erfurt in 1927, Kaltofen served in WWII as a Luftwaffenhelfer (a young person enlisted to help German soldiers keep their anti-aircraft guns loaded). He was captured and sent to a P.O.W. camp. After the War, he studied various subjects at schools in Jena and Leipzig, eventually working as dramaturge at theaters in Meisen and Leipzig. At that time, he wrote a few fairytale plays, including the theatrical version of Das Zaubermännchen—a socialist reinterpretation of Rumpelstiltskin—which was later made into a movie by Frank Beyer (and don’t worry, we’ll be discussing that one soon enough). Kaltofen died in 1977 in East Berlin.

Snow White stars the stunning Doris Weikow. Weikow began her career as a gymnast, winning the 1957 German Youth Champion in 1957. From there, she went into television as an announcer—a role she continued throughout her life. At the time Snow White was being filmed, she was married to Erwin Geschonneck, and they had one daughter, the journalist and writer Fina Geschonneck. Weikow only appeared in four films (Snow White was her first). She might have had more of a career in films but she chose to continue working as a television announcer instead.

Playing opposite her as the evil queen is Marianne Christina Schilling in what would be her most career-defining role. Schilling mostly appeared in roles as supporting characters. She moved with her husband to Bremen in 1984. Suffering from a particularly severe form of arthritis, she retired from acting and died in 2012.

Schilling came to the role thanks to Albert Wilkening, the head honcho at the Babelsberg Film Studio. Although his name only appeared in the credits for one film, Wilkening’s influence on the film industry in East Germany was monumental. He started working in the film industry after WWII, when he was assigned to be the acting director of Tobis-Filmkunst in Johannisthal. Because of his degree in engineering, and a background in law and patents, he was hired as the technical director at DEFA. Soon he becomes the man in charge of nearly aspect of studio operations, eventually becoming the head of productions at DEFA. In 1954, he helps found the Film School in Potsdam-Babelsberg and is appointed Head of the Faculty of Cinematography. In 1956, Wilkening took over the role of director of feature films at DEFA from Hans Rodenberg, a job he occupied until 1961, when the job is taken over by Jochen Mückenberger with Wilkening’s blessings. Mückenberger was even more interested in art than Wilkening, and under him DEFA flourished. That all came to an end in 1966 with the 11th Plenum decisions. A party wonk named Franz Bruk took over, but Bruk was inept and ill-suited for the job. Eventually Wilkening was asked to return to DEFA, where he worked from 1973 until his retirement in 1976. Wilkening lived just long enough to see the Wall come down, but not longer enough to see Germany reunited. He died on the 24th of July, 1990.

This film has all the things one comes to expect from a DEFA fairytale film: the strange but appealing staginess, the catchy tunes, and eye-bleeding color. The films remains one of the most popular fairytale films to ever come out of East Germany. After Heart of Stone and The Story of Little Mook, Snow White was DEFA’s most successful fairytale film. Those two movies were made and distributed back when the West was more accepting of East German films, but Snow White came out a few months after the Berlin Wall had been built and relations between the two Germanys were at their worst. The fact that the film was so popular is a testament to its quality. It is a good fairytale film, rich in details and beautifully photographed. The songs are catchy (annoyingly so) and there’s nothing here that a West German parent wouldn’t want their kids to watch.