There is a stereotype in the West about the films from communist countries: That they’re all about the struggles of the working class against oppression; that they’re shot in the style of socialist realism popularized by Russian directors; that they’re full of hokum about the importance of agriculture and tractors. Any regular reader of this blog knows that nothing could be further from the truth, but if you wanted to show one film that reinforced this stereotype, Our Daily Bread (Unser täglich Brot) would be the one to show. It is the perfect example of the communist film, right down to the parade of tractors at the end. That’s not to say it’s a bad film—director Slatan Dudow knows his craft—but it isn’t a valid representation of the films of East Germany, or the later films of Dudow for that matter. It’s an odd man out, made at a time when the GDR’s autonomy as a state was tenuous at best. The country was only a month old at that point.

Before East Germany ever became a country, the director Slatan Dudow was a hero of socialist cinema. His 1932 film Kuhle Wampe, oder Wem gehört die Welt? (Kuhle Wampe, or Who Owns the World?) looked at the effects of the great depression on the average German, and championed the rights of workers. With its strong pro-socialist message (written by Bertolt Brecht) the film earned the enmity of the Nazis, who promptly banned it and arrested Dudow when they came to power. The film ends with a rousing rendition of “Solidaritätslied” (“Solidarity Song”)—written by Brecht with music by Hanns Eisler—which went on to become a popular song during the Spanish Civil War. 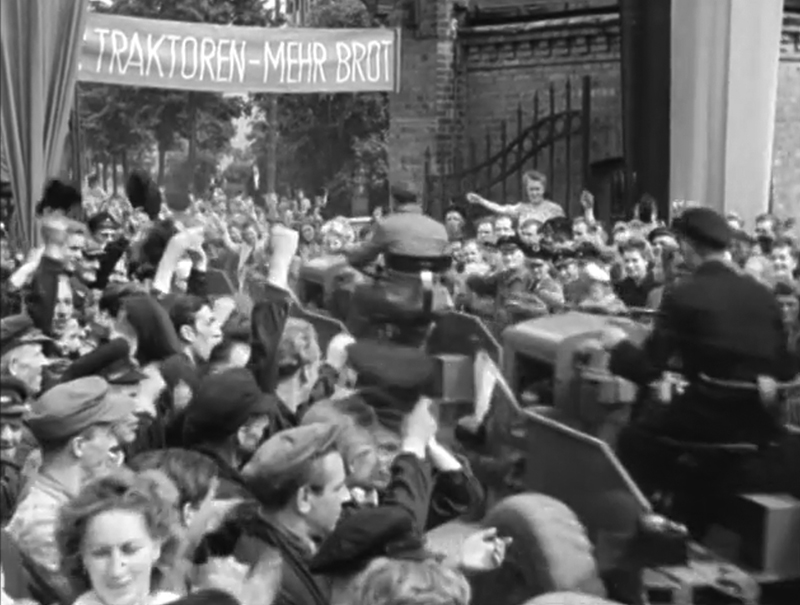 Our Daily Bread is very much in the same vein as Kuhle Wampe, and might even be viewed as a sequel. It tells the story of the struggles of the Webers family to make ends meet after World War II. Father Karl (Paul Bildt) worked as a treasurer for the Renner & Co. Machine Works, and continues to put his faith in the capitalist system. His Ernst (Harry Hindemith), on the other hand, is a commited socialist is trying to help the workers rebuild Renner’s closed machine factory. Karl’s other son Harry (Paul Edwin Roth) wants to have nothing to do socialism, and prefers to make money by participating in the Black Market that thrived in Berlin after the War. Meanwhile, daughter Inge (Inge Landgut) tries to hold down a job, but keeps finding her honesty and compassion getting in the way. Like an English morality play, the people who make sacrifices and work hard are rewarded, while the ones looking for a life of ease are doomed to tragedy.

Our Daily Bread was Slatan Dudow’s first feature film since Kuhle Wampe, but it wouldn’t be his last. He made six more films for DEFA, and probably would have made more if he hadn’t died in a car accident while filming his last movie, Christine. Dudow’s DEFA films include Destinies of Women, The Captain of Cologne (Der Hauptmann von Köln), and Love’s Confusion. Watching his films in sequence,you can see Dudow’s shift away from the old stylized aesthetics of Ufa and Mosfilm to DEFA’s more objective style of filmmaking.

Amusingly, most of the stars of this, the most socialist of East German films, are West Germans. There was still no West German film industry to speak of at that point so West German actors and directors sought work across the border. Paul Bildt and Siegmar Schneider made a few films for DEFA, but for Paul Edwin Roth and Inge Landgut, this was their only East German movie. Inge Landgut started appearing in films when she was three years old. She’s the girl we see threatened by Peter Lorre in Fritz Lang’s M. She also played Pony in the 1931 version of Emil und die Detektive.1 Viktoria von Ballasko hailed from Vienna. A leading lady during the thirties, by the fifties, she was playing mothers, with one of her last film roles playing Horst Buchholz’s mother in Die Halbstraken (released in the U.S. under the much better title Teenage Wolfpack). Schneider, Roth, Landgut, and von Ballasko all found work in the West dubbing American movies into German.

Harry Hindemith, like his character, was devoted to the socialist cause and had no intention of leaving East Germany. He had been a member of the German Communist party (KPD) before Hitler took over. Although he joined the Nazi Party during World War II, this was mostly a move to ensure he could continue to perform on stage. After the War he rejoined the KPD, and then East Germany’s Socialist Unity Party (SED). He often appeared in supporting roles in DEFA films and East German television shows as well as performing on stage and in radio plays. He died in East Berlin in 1973.

The score for the film is by Hanns Eisler, who’d been kicked out of the United States a year earlier by the nitwits on the House Un-American Activities Committee. Upon arriving in East Germany, he composed the country’s national anthem “Auferstanden aus Ruinen” (“Risen from the Ruins”), a better anthem than the one used by West Germany: Hitler’s beloved “Deutschlandlied” (better known to Americans as “Deutschland über alles”—the music that is played whenever a Nazi arrives in a movie). While in Hollywood, Eisler had written the scores for a few movies, most notably Hangmen Also Die, None But the Lonely Heart, and Deadline at Dawn. In East Germany, Eisler went on to write the scores for several movies, including The Council of the Gods, Destinies of Women, and The Crucible. Eisler had written the music for several of Bertolt Brecht’s plays and two men were close. They both left Germany and worked in Hollywood, and they were both drummed out of America by the HUAC (although Eisler, was forcibly ejected, while Brecht chose to leave). Then they moved to East Germany with high hopes for that republic. Brecht died in 1956, when many good socialists were still rooting for the GDR. Eisler died in 1962. By then it was clear that the socialist republic Brecht and Eisler had striven for was inexorably headed toward failure. Without his pal Brecht, Eisler found very few people with whom he could commiserate. He grew more sullen, and withdrew from the public, dying of a heart attack in 1962.

Our Daily Bread is a good movie in the same way that Herbert J. Biberman’s Salt of the Earth is a good movie. Both films promote ideas that were being intentionally suppressed in the United States and both films wear their politics on their sleeves. Both films are intended to rouse the people against the exploitation of the labor force by the rich, but are a bit too earnest for their own good. The lesson in Our Daily Bread is a good one, but the GDR’s failure to live up to its own rhetoric helped capitalists such as Ronald Reagan and Margaret Thatcher neutralize the message and bury the ideals.

1. Based on the popular children’s book by Erich Kästner, Emil and the Detectives was directed by Gerhard Lamprecht, who

2 thoughts on “Our Daily Bread”