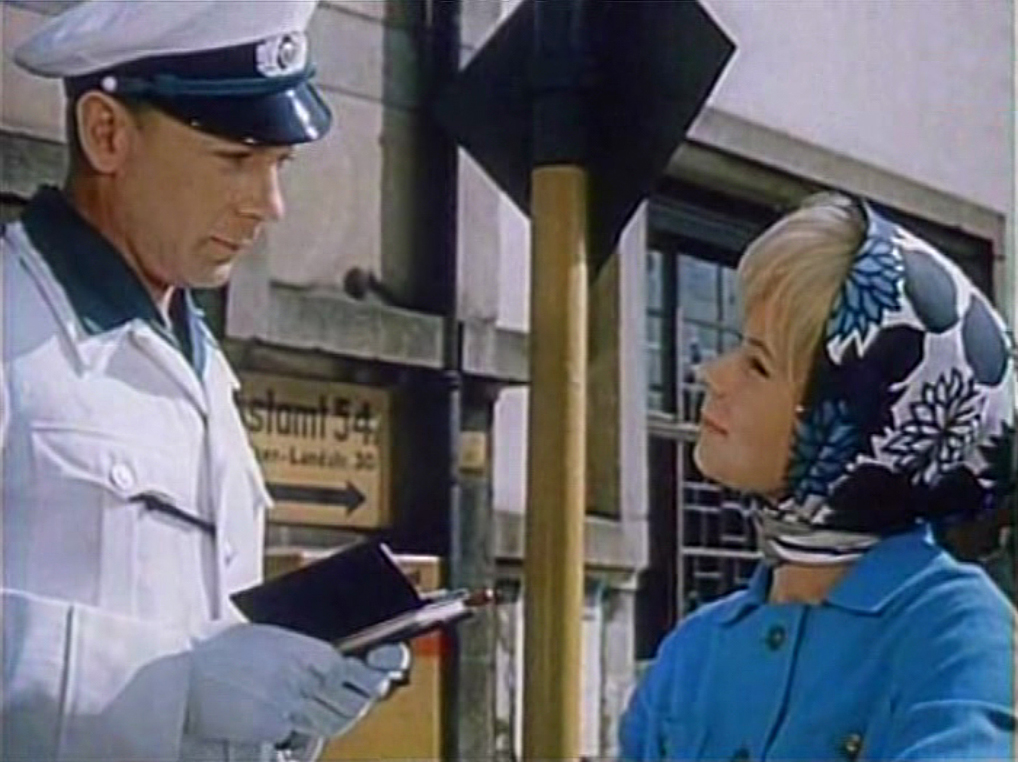 The musical comedy is not a genre anyone would associate with East Germany. It was born in Hollywood and reached its acme under Arthur Freed at MGM. Musical comedies are happy affairs, light as meringues  colorful, and carefree—not qualities that immediately spring to mind when one thinks of the GDR. But DEFA made several musicals and most of them are fun. Beloved White Mouse (Geliebte Weiße Maus) is one of the most fun musicals, which is curious considering it began with a PR effort from the Ministry of the Interior to improve the public image of the Volkspolizei.

After the wall was built, East Germany endured a great deal of bad press. In spite of their argument that the wall was not an instrument of oppression, but one of protection (see Look at This City!), the wall helped promote the image of East Germany as one of a drab, 1984-style land, devoid of happiness and love. This was especially true of the Volkspolizei, who were often enlisted to help with situations that were really under the purview of the military. When faced with protests, the VoPo resorted to the same tactics used by cops all over the world in these situations: hit first, arrest for resistance, and ask questions later. As a consequence, by 1962, Stasi reports were showing a dangerously large-scale discontentment with the People’s Police.

The Ministry of the Interior turned to DEFA to help change this image and change it they did. DEFA’s solution was a light comedy about one of the most innocuous members of the Volkspolizei—the lowly traffic cop. Traffic police were fixtures of Germany during the fifties and sixties—both east and west—and were often seen in the middle of intersections directing traffic. They wore white uniforms to make them more visible, which led to the nickname “White Mice” (Weiße Mäuse). Beloved White Mouse is the story of one such traffic cop named Fritz Bachmann. Fritz directs traffic at a busy intersection in Dresden’s Loschwitz borough. Everyday, he sees the same people walk and drive by, in particular, a doe-eyed waif named Helene who rides a “Troll” motor scooter to work. Helene also notices Fritz and decides it’s time to meet him. Fritz has another admirer, a zaftig woman named Frau Messmer, who walks her poodle past Fritz’s station and has a nasty habit of losing control of her poodle at the intersection. When the interests of these three collide—not literally, but almost—the story begins.

Like any good musical, reality here is pliable. People start singing directly to the movie audience, and at one point Fritz and Helene sail over Dresden, carried aloft by a beach umbrella. It’s a fun sequence, and the camera is careful not to venture too close to the parts of the city that were still in ruins from the WWII firebombing by Allied troops. After all, this is a comedy, not a documentary.

Beloved White Mouse was directed by Gottfried Kolditz, and stars Rolf Herricht. Kolditz hardly needs an introduction here. Some of his films have already been featured on this blog, including Midnight Review, Apaches, and the psychedelic masterpiece, In the Dust of the Stars. Playing Fritz is Rolf Herricht. one of East Germany’s most popular comic actors. Herricht was best known as half of the comedy duo, Herricht and Preil, who were staples of East German television. An example of their work together can be seen in the film DEFA Disko 77. Herricht appeared in several films, including Not To Me, Madam!, Hauptmann Florian von der Mühle (Captain Florian of the Mill), and the banned film, Hands Up, or I’ll Shoot. Herricht died in 1981 of a heart attack on stage during a performance of Kiss Me Kate at the Berlin Metropol Theater.

Karin Schröder, who plays Helene, is possibly the most adorable actress to come out East Germany. Her large brown eyes and blonde hair here make her look like a living Keane painting. She got her start playing the sporty Ruth in the popular DEFA musical New Year’s Eve Punch, and demonstrated a knack for comedy that Kolditz put to good use in Beloved White Mouse. In 1976, she proved she was equally adept at drama, winning the best actress award at the Karlovy Vary International Film Festival for her performance in Kurt Maetzig’s Mann gegen mann (Man Against Man). Most of her work in East Germany was in television, where she appeared in over thirty TV movies and several of the most popular shows. She appeared nine times on the East German TV series Der Staatsanwalt hat das Wort (The D.A. Has the Floor), although never in the same role twice. In 1987, she moved to West Germany. As with other actors that moved prior to the Wende, she was able to continue her career without the sorts of problems that those who stayed in East Germany until the bitter end experienced. She has gone on the appear in several popular TV shows since then, including a turn as the Kriminaloberrätin Marianne Stockhausen on Die Wache and as Sophie Himmel-Eiler on the long running soap opera Unter Uns.

Playing the unlovable Frau Messmer is Marianne Wünscher, an important character actor in the DEFA line-up. She appeared in dozens of East German TV-movies and several of the Stacheltier shorts that played before the main features at East German cinemas. She also made a brief appearance in Hot Summer as the director of the Volkseigenes Gut (farm collective). Too chubby for lead roles, she made a career out of playing the parts of nosy neighbors, officious secretaries, or lovable older women. She also appeared on stage, and had a knack for comedy. Ms. Wünscher died in 1990 in the middle of the Wende—after the wall fell, but before the reunification. She is buried in the Friedhof Pankow III cemetery in Berlin’s Pankow-Schönhausen district.

The music for Beloved White Mouse was by Carlernst Ortwein, a Leipzig-born pianist who used the pseudonym Conny Odd for his film work. Most of his film scores were made for the short films of Lothar Barke and others. In 1967 he moved away from film work to concentrate on his serious music, He appears briefly in the film playing piano in the dance orchestra. Conny Odd didn’t have an avant garde bone in this body, so the songs here, while enjoyable, could have come from a musical made ten years earlier. You won’t be singing them upon leaving the theater like you might with Hot Summer. A particularly entertaining number, though, is “Der Mann von Titelblatt,” which features a beauty parlor full of people singing about Fritz’s appearance on the cover of a magazine. It’s the kind of surreal nuttiness that makes this and other musicals so much fun to watch.

No examination of Beloved White Mouse would be complete without mentioning the work of its cinematographer, Günter Haubold. A comedy musical requires a bright and happy palette of colors and Haubold’s work here fits the bill perfectly (helped considerably by Babett Koplowitz’s colorful costume design). Everything is bright and airy, and seems like it was filmed in the sunlight–even the indoor scenes. There are no shadows in this film. Haubold got his start assisting Wolf Göthe on Gerhard Klein’s A Berlin Romance. He worked on several DEFA classics, including Konrad Petzold’s Das Lied vom Trompeter (The Trumpeter’s Song), Horst E. Brandt’s Zwischen Nacht und Tag (Between Night and Day), Günter Reisch’s Anton the Magician, and Iris Gusner’s All My Girls. In most respects, Beloved White Mouse was an anomaly in his body of work. He is best known for a semi-documentary style and some of the best black-and-white cinematography committed to film. He reached retirement age just as the wall came down. He ended his career with the dissolution of DEFA and DFF, but continued to work privately and to teach cinematography. He died in 1999.

As one might expect, Beloved White Mouse was a hit in East Germany. After the 11th Plenum, lighthearted comedy musicals like this one were taken off the schedule. Several of the films relegated to the “Poison Cabinet” during the 11th Plenum were banned for no better reason than that they were frivolous fun. But people need their fun, and it wasn’t long before comedies and musicals started showing up again, most notably with the classic East German Beach Party movie, Hot Summer.