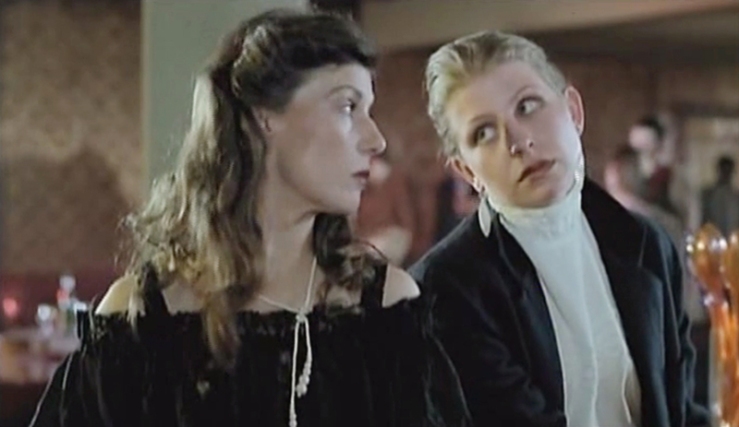 The title of Bailing Out (Kaskade rückwärts) refers to a particularly tricky equestrian move where the rider, rather than performing an emergency dismount by a normal method, does a backwards somersault off the rear of the horse. The move is ably demonstrated in the film and is impressive, but it’s really a stunt move that no horse rider is likely to use unless they like to show off and don’t mind a few broken bones in the learning process. In the context of the film, the move also refers to the sudden decision of a dispatcher named Maja (Marion Wiegmann) to “bail out” of her placid small town existence and start things anew in the city. Her husband had died and Maja is having trouble moving on, much to the consternation of her teenage daughter, who sees her mother settling into a rut. Maja eventually decides to go for it. She moves to the city and starts learning to become a train conductor. Teaching her the ropes is Gerd (Siegfried Höchst), a crusty, lifelong bachelor who manages, somehow, to be both stodgy and eccentric. Playing matchmaker for Maja is Carola (Johanna Schall), a frustrated wife who is living the single life vicariously through Maja.

While DEFA prided itself (with some justification) on films told from a female perspective, the fact is, most of these films were made by men. It is interesting to compare this film, which was directed by Iris Gusner—the only female film director working at DEFA at the time—with Egon Günther’s Her Third, which covers similar territory, but was written and directed by men. Curiously, Her Third is harsher in its criticism of male behavior than Gusner’s film. Bailing Out offers a more nuanced picture of things. The men here are still problematic, but not simply because they are pigs. Some are just oddballs who probably will never meet a woman—or any other person, for that matter—that they can relate to; and the women have their own problems. For a while, it looks like Maja might start a relationship with the music teacher Toni (Jaecki Schwarz), who praises her singing, but who is more interested in her voice than being a boyfriend. We know where this film is heading, and it eventually gets there in its sweet, oddball way.

Iris Gusner’s film credentials are impressive. She studied under Mikhail Romm at the All-Union State Institute of Cinematography (VGIK, now known as the Gerasimov Institute of Cinematography), and worked as assistant director to Konrad Wolf on Goya. Her first feature film, The Dove on the Roof, was banned, so she did what most directors faced with this situation chose to do: she played it safe next time by making a fairytale film (The Blue Light). She scored her biggest hit with All My Girls. A few months before the Wall came down, Gusner moved to Cologne, where she worked in television. In 2009, Fantasie und Arbeit: Biografische Zwiesprache (Fantasy and Work: A Biographical Dialog) was published; a book she co-wrote with West German filmmaker Helke Sander.

Maja is played by Marion Wiegmann, a theater actress who worked primarily at the Brandenburger Theater. Bailing Out was her only feature film, but it was enough to garner her the award for Best Actress at the 1984 National Feature Film Festival of the GDR (Nationales Spielfilmfestival der DDR). In 2014, she received an award from the Brandenburger Theater for her work there.

Like Wiegmann, co-star Siegfried Höchst was also a theater actor. Unlike Wiegmann, however, Höchst never recovered from the fall of the Wall. Born into an impoverished situation, Höchst was an ardent believer in the ideals of communism and worked to support the SED. He was an excellent actor and appeared in several films and TV movies as well as appearing on stage. Unfortunately, he was also a heavy drinker, a problem that got progressively worse during the seventies. Coming out of rehab in the early eighties, he started to work again, and even managed to direct a couple TV movies before the Wall came down. But when the republic began to falter, Höchst returned to the bottle. After the Wende, Höchst withdrew from public appearances, preferring to stay home and drink. His exact date of death is unknown. His body was found on December 13, 1991, but he had apparently been dead a few days already at that point.

The real star of the film is Johanna Schall. Whenever she’s on the screen, it’s hard to watch anyone else. Schall comes as close to royalty as the GDR had to offer. Her father was Ekkehard Schall, one of the foremost interpreters of the works of Bertolt Brecht, and her mother was Barbara Brecht-Schall, the daughter of Helene Weigel and Bertolt Brecht. After reunification, Schall worked as a director for various theaters across Germany, while, at the same time, appearing in television shows and giving guest lectures. In 1992, she starred in Apfelbäume (Apple Trees), which was screened in the Un Certain Regard section of the Cannes Film Festival. These days, she prefers to work behind the scenes as a theater director. She also writes on a number of topics on her blog (in German, of course).

At the start of Bailing Out, we hear Maja sing a song over the dispatch radio to one of the truckers. The song was written by Christian Kožik, a composer living in Potsdam. The lyrics are based on Ballade de la belle heaumière aux filles de joie (Ballad of the beautiful helmetmaker’s wife to the ladies of the night) by François Villon. Villon’s poem is a warning to pretty young women that someday their beauty would fade, so they’d better get all they can while men are still putty in the their hands. The poem was also the inspiration for Auguste Rodin’s La Belle qui fut heaulmière, a sculpture of a withered old woman, sitting on a rock.

Bailing Out is an odd film with middle-aged leads, quirky behavior, and unusual career choices. Perhaps this was too odd for the East German audience because the film didn’t stay in theaters long and actually got better reviews in West Germany than in the GDR. For anyone interested in the East German Frauenfilme (Women’s films), this is a good follow-up to Gusner’s All My Girls, which also looks at working women, but at a different point in their careers.

Buy or stream the film.