The Man Who Replaced Grandma (Der Mann, der nach der Oma kam) belongs to the comedy of errors genre—specifically the sub-genre that finds comedy in the mistaken belief that someone is being unfaithful.1 Some classic Hollywood films have mined this vein for comedy, most notably Preston Sturges in his hilarious 1948 film, Unfaithfully Yours, and many of Doris Day’s comedies. This film has a more feminist perspective than those films, and doesn’t make quite as much of a romp out of the subject as a Hollywood film would. Made shortly after Erich Honecker took over control of the DDR from Walter Ulbricht, The Man Who Replaced Grandma is slightly racy and a more daring film than would have been allowed a few years earlier, but manages to avoid too much controversy.

The film is based on the story Graffunda räumt auf (Graffunda Cleans Up) by Renate Holland-Moritz. Holland-Moritz was sort of the Pauline Kael of East Germany. As well as writing multiple books, she was also the film critic for Eulenspiegel, East Germany’s satire magazine. As a critic, she was remarkably candid in her criticism. If a DEFA film sucked, she wasn’t afraid to say so. The Man Who Replaced Grandma tells the story of the Piesold family. Mom is an opera singer and dad is a TV emcee, and between them, there is little time left to spend with the family. It’s never been a problem because Oma (grandma) always took care of everything, but when Oma suddenly announces that she’s getting remarried, the family starts looking for a replacement and finds that it’s not that easy. They finally settle on a man named Erwin Graffunda, who doesn’t seem to mind the amount of work involved, is very energetic, and doesn’t want much money for the job. The problem is that, being a handsome young man, the neighbors immediately suspect some hanky-panky is going on between him and Mrs. Piesold.

This film is one of those cases where much of the humor is contingent on the German language, and subtitles won’t help. Graffunda’s last name, for instance, becomes a joke when people refer to him as “Graf Funda.” “Graf” is usually translated to “Count” in English, which effectively destroys the joke. In another scene, after Graffunda discover that the Piesold’s young son has put his teddy bear in the washing machine, Graffunda makes a joke about the bear not being a “Waschbär” (“Das ist doch kein Waschbär!“). Waschbär—pronounced “wash bear”—is the German word for Racoon.2 An English subtitle of “He is a not a racoon” would make no sense in this context, and “wash bear” has no meaning in English. Short of adding a parenthetical notes, I see no way to translate this film’s dialog. Even the title of the original story—Graffunda räumt auf—has the added meaning not only of cleaning up, but of dispelling something, such as a myth. 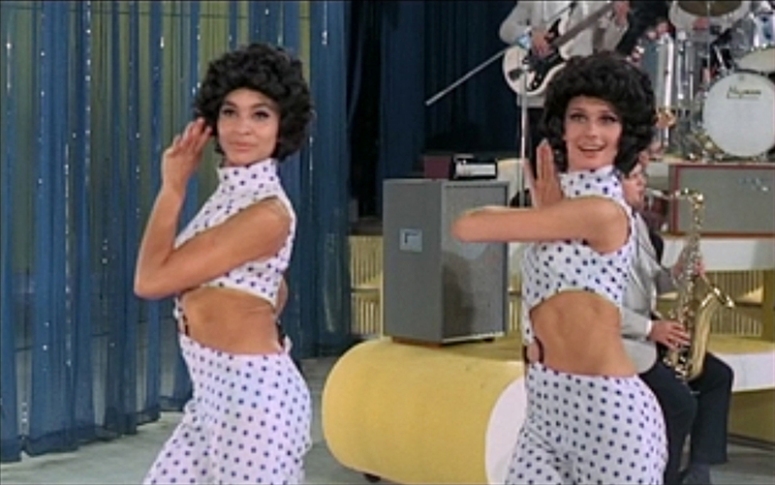 Playing Erwin Graffunda is Winifried Glatzeder, best known as Paul in The Legend of Paul and Paula. Glatzeder had been working in films for a few years, when he got his first starring role in Siegfried Kühn’s 1971 film Time of the Storks (Zeit der Störche), the film was popular and people began to take notice of Glatzeder. The Man Who Replaced Grandma was his second starring role and helped further his reputation as a charming and unique-looking leading man, but it was his role in The Legend of Paul and Paula that put him on the map. So much so that he does a cameo as Paul in the 1999 comedy Sonnenallee (usually translated as Sun Alley, although, strictly speaking, an Allee is definitely not an alley).

Playing Mr. and Mrs. Piesold are Rolf Herricht and Marita Böhme respectively. Herricht was already a well-known comic actor by the time he made this film, appearing often on television and in the DEFA classic Beloved White Mouse. Böhme had starred opposite Herricht once before in Hero of the Reserve (Der Reserveheld), and had proven to have a talent for comedy in films such as On the Sunny Side and Carbide and Sorrel. Also appearing in the film are the fine comic actors Marianne Wünscher and Fred Delmare.

Special mention must be given to Katrin Martin, who plays the Piesold daughter Gaby. In her first film role, Martin maintains a perfect balance of a teenager who is sexually aware, but not really ready to know what to do with it. Martin was a graduate of the Rostock drama school, and has appeared in many stage productions. She is best known for her portrayal of Rose Red in the DEFA Märchenfilm Snow White and Rose Red (Schneeweißchen und Rosenrot). After the Wende, film roles became scarcer, so she turned to audio, producing radio plays for children. She currently lives in Berlin.

The film is directed by Roland Oehme. Oehme got his start in films by working as an intern under Ralk Kirsten on the Manfred Krug comedy, Follow Me, Rascals! (Mir nach, Canaillen!), Shortly after graduating, Oehme refused to take on a project because he didn’t like the script. As a consequence, he spent a few years working in the DEFA documentary film department before being allowed to start directing his own films. He finally got a chance to direct alongside fellow newcomer, Lothar Warneke with the Rolf Römer comedy, Not to Me, Madam! The Man Who Replaced Grandma was the first film that he both wrote and directed. He continued to have a successful career in film and television in the DDR. After the Wende, he turned to stage directing, working for several years with the Störtebeker Festival in Ralswiek on Rügen. From 2006 to 2013 he worked in the spa town of Waren (Müritz), writing a cycle of plays called The Muritz Saga, a new one of which is performed every year.

The Man Who Replaced Grandma was a popular film and did well at the box office. It is not a classic, but it is an entertaining little film with a likable cast. As with any comedy that mines its gold from puns and double entendres, it is best appreciated by those at least moderately familiar with the German language.

1. Of course, German, being the Lego language that it is when it comes to building words, it is possible to construct a word that specifically addresses this sub-genre: Eifersuchtsverwechslungskomödie.

2. One of the more entertaining aspects of the German language is how it seems, at times, like the duties of naming animals was given to a five-year-old. A bat is a “flying mouse” (Fledermaus), a skunk is a “stink animal” (Stinktier), a groundhog is a “mumbling animal” (Murmeltier), and—my personal favorite—a slug is a naked snail (Nacktschnecke).