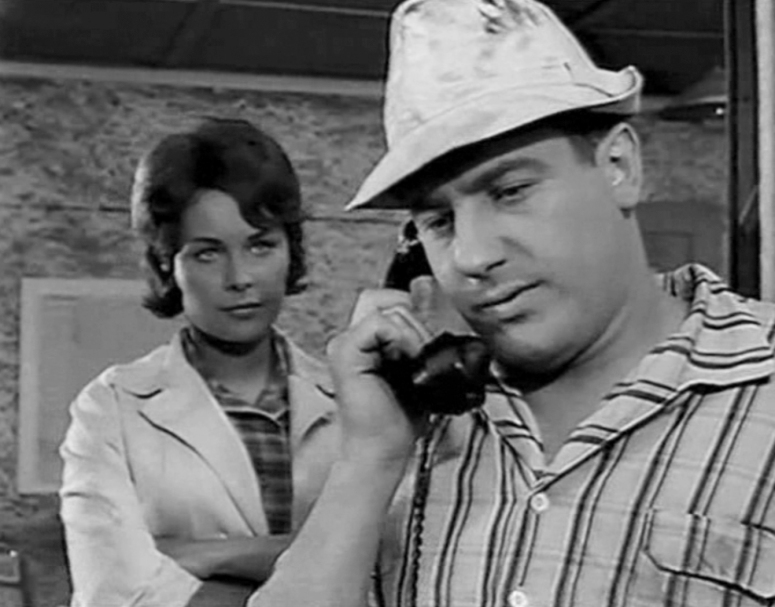 On the Sunny Side (Auf der Sonnenseite) is an entertaining little film about a man named Martin Hoff, who goes from working in a steel foundry to taking drama classes, only to be kicked out because of his behavior. It stars Manfred Krug, who, like Hoff, was working as a steelworker when he started taking drama classes at the State Drama School in Berlin (now the Ernst Busch Academy of Dramatic Arts), and like Hoff was kicked out for his behavior. Krug, however, eventually found his way into Bertolt Brecht’s Berliner Ensemble, and from there into movies. But that is not what this film is about. Most of the plot concerns Martin Hoff’s attempts to woo Ottilie Zinn, the pretty architect who is in charge of a project on which Hoff is working. Zinn’s aloof indifference toward him provokes Hoff to take a bet from his compatriots that he can woo her. It’s an old plot that has been used in films from Guys and Dolls to How to Lose a Guy in 10 Days, and with similar results.

On the Sunny Side was a popular film that—along with Midnight Revue, released a few months later—helped cement Manfred Krug’s reputation as a singer as well as an actor. Mr. Krug started in films in 1957, usually playing the heavy. He starred in several TV-movies at the start of his career, playing everything from the reprehensible Locky McCormick in the East German made-for-TV version of Johnny Belinda, to Mephisto in a TV adaptation of Faust.

In 1966, he turned in a performance as Hannes Balla in Trace of Stones that would have been a career-defining role for most actors, but the film was quickly pulled from theaters as a result of the idiotic 11th Plenum. While the Plenum was a career ender for several people at DEFA, the banning of Trace of Stones had little effect on Krug’s career. He continued to appear in films and released several albums on the GDR’s Amiga label. He often collaborated with jazz musician and film composer Gunther Fischer, with Fischer writing the music and Krug writing the lyrics under the pseudonym, “Clemens Kerber.”

Then in 1976, he was joined the protest against the expatriation of leftist singer, Wolf Biermann. For most of the DEFA actors, directors and writers who signed this protest, the move proved to be the end of their film careers in East Germany, but Krug didn’t stick around to find out. Born in Duisberg in 1937, Mr. Krug was a West German by birth and was able to use this fact to leave the GDR as soon as it became apparent that the SED was not going to respond to the protest with anything other than repression and surveillance. Mr. Krug quickly established a new career in West Germany, primarily in television, where he made a splash as truck driver Franz Meersdonk in the popular TV series, Auf Achse (On the Axle) and later as the lawyer Robert Liebling on Jurek Becker’s Liebling Kreuzberg. (For more on Manfred Krug, see The Trace of Stones.)

On the Sunny Side was written and directed by Ralf Kirsten. After studying theater at the Humboldt University in Berlin, Kristen went to Prague, where he studied directing at the Film and TV School of the Academy of Performing Arts in Prague, and joined fellow DEFA directors Konrad Petzold and Frank Beyer to create the short film, Blázni mezi námi (Fools Among Us). On the Sunny Side was Kirsten’s first bona fide hit. He teamed up with Manfred Krug again the following year to make Beschreibung eines Sommers (Description of a Summer), which also was also a hit with the public. He went on to make several more popular films, including Mir nach, Canaillen! (Follow Me, Canaillen!), Frau Venus und ihr Teufel (Venus and her Devil), Die Elixiere des Teufels (The Devil’s Elixir), and Unterm Birnbaum (Under the Pear Tree). After the Wende, Kirsten found it more difficult to find work as director and began teaching at the film school in Babelsberg. He died in 1998 in Berlin.

Playing the independent and lovely Ottilie is Marita Böhme. After training to be a pre-school teacher, Ms. Böhme began studying theater at the State Drama school in Berlin. A gifted singer, she often appeared in musicals and operettas. She appeared in several movies, in roles of varying importance. She appeared the year after On the Sunny Side in Ralf Kirsten’s Beschreibung eines Sommers, although this time not as Manfred Krug’s love interest. She is best remembered for her role in Carbide and Sorrel. After the Wende she became a regular on Polizeiruf 110 as Opera director Edith Reger.

In spite of being released in the middle of winter, On the Sunny Side was a big hit. The public was looking for something cheerful to take their minds off the increasing tensions between east and west and the recent construction of the Berlin Wall, and Kirsten’s film fit the bill. Today it seems like very light fare, but its importance to the times should not be underestimated. It was the right film at the right time.