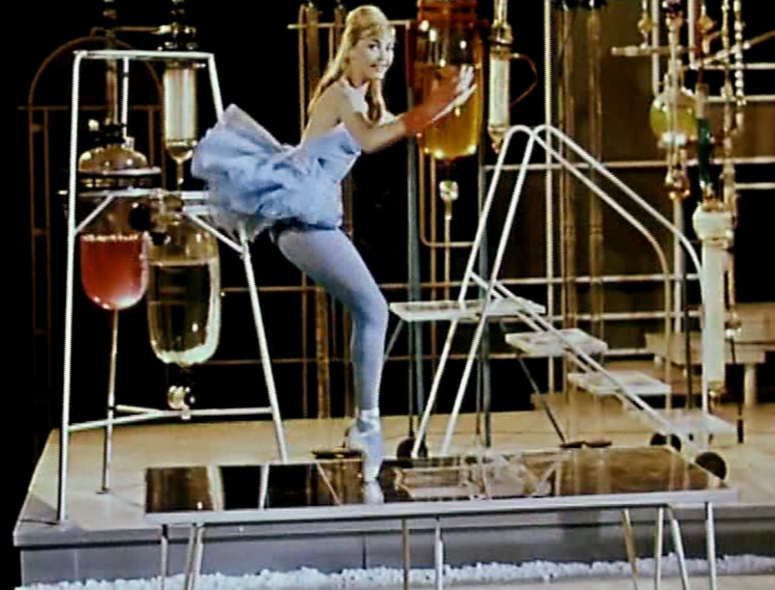 As mentioned elsewhere on this blog, the East German government had a rocky relationship with musicals. The inherent frivolity of the genre clashed mightily with the government’s philosophy that every film should promote good socialist values. At the same time, musicals were popular with the public in the fifties on both sides of the Iron Curtain. In 1958, DEFA made its first musical, My Wife Wants to Sing, and the film was temporarily shelved due to its apparent lack of a distinct socialist message. When it was released it was a big hit and helped open the doors to the musical form.

In 1959, The Punch Bowl (Maibowle), a light comedy directed by Günter Reisch, was released. The Punch Bowl follows the adventures and misadventures of the Lehmann family after the family patriarch Wilhelm Lehmann is scheduled to receive a Banner der Arbeit (Banner of Labor) medal for his leadership of the Grünefeld Chemical Plant. Director Reisch was careful to make sure that there was a solid socialist message here. The film was approved and was a hit. So director Reisch decided to up the ante slightly with New Year’s Punch (Silvesterpunsch), a sequel that starts in the same comic vein as the first film, and then turns into a full-on musical.

In structure, it is similar to the films of the musicals of the thirties and forties, where people spend most of the movie planning for a big stage show, which is revealed as the finale. The biggest difference here is that the musical numbers here are aimed at promoting the importance of chemistry to the development of the state. Included in the numbers are an ode to Calcium Carbide and the joys of polymerization. Like modern musicals—but very unlike the Hollywood musicals at the time—the singing never spontaneously erupts with an invisible orchestra. If someone sings, there is a reason, and there are musicians present, no matter how illogical that may be. Most of the singing and dancing is saved for the grand finale, which culminates in the celebration of the New Year Eve (which is called Silvester in German, hence the title).

Heinz Draehn and Christel Bodenstein reprise their roles from The Punch Bowl as Franz and Suse Lehmann, as do Erich Franz and Erika Dunkelmann as the parents. The other Lehmann children form the first film, and there were several, are replaced this time around by Michel, played by Achim Schmidtchen, an aspiring trumpet player. The story takes place at the Grünefeld Chemical Plant of the first film. The work force is evenly divided between fans of the arts and fans of sports. Since both of things were very important to East German culture, it is important (and inevitable, really) that both of these groups eventually learn to get along.

Christel Bodenstein—a dancer before she became an actor—gets to demonstrate her skills here (although I suspect a double was used for the ice skating scenes). At one point, she dances on a narrow, slightly bouncy tabletop en pointe—something I wouldn’t recommend anyone to attempt. Bodenstein is best known for her part as the selfish princess in The Singing, Ringing Tree, but she appeared in many other popular East German films and television shows. After the Wende, her career on television and films essentially ended. Her role in the Mario Adorf mini-series Die Kaltenbach-Papiere (The Kaltenbach Papers) was her last role in front of a camera. Since then, she has devoted her career to the stage.

New Year’s Punch marks the debut of Karin Schröder. Best known for her role in Beloved White Mouse, which starred East German comedian Rolf Herricht. Schröder appears in New Year’s Punch with dark hair and a short, tomboy haircut, but still looks every bit as adorable as she did in the Rolf Herricht comedy. Schröder was originally trained as a certified stenographer, but director Günter Reisch immediately saw her potential and used her often (for more on Reisch, see A Lively Christmas Eve). She appeared in a number of television shows and movies in East Germany, and continued her career after the Wall came down, Most recently, she appeared as a recurring character in the German TV show, Alles Klara.

The cinematographer for New Year’s Punch was Karl Plintzner, whose color work here and elsewhere rivals the work of the great Leon Shamroy. Plintzner got his start as an assistant cameraman shortly before the beginning of WWII. After the war he joined DEFA as a cinematographer, working first on Wolfgang Staudte’s The Adventures of Fridolin (Die seltsamen Abenteuer des Herrn Fridolin B.), and then on Erich Engel’s The Blum Affair. Plintzner showed a special knack for color right off the bat with his work on the Ernst Thälmann films, but it was The Singing, Ringing Tree where he really got to let loose with colors so vivid they’ll make your eyes bleed. For health reasons, he retired in 1965. He died on December 7, 1975 in East Berlin.

The music for New Year’s Punch was composed by Helmut Nier. Nier was the founder of the Association of Composers and Musicologist in the GDR (Verbandes der Komponisten und Musikwissenschaftler), whose stated purpose was to maintain and develop the musical culture of the GDR, as well as ensure that composers received proper credit and compensation. As a composer, Nier never matched the talent of Karl-Ernst Sasse or Gerd Natchinski. The songs in New Year’s Punch are entertaining enough, but not particularly memorable. Nier was better at serious scores. His soundtracks for Spur in die Nacht (Trace in the Night), The Baldheaded Gang, and Black Velvet are far more compelling than any of his work on comedies and romances. As with many of the East German’s who worked for DEFA, his career in films ended after the Wende. Nier died in 2002.

In terms of musicals, New Year’s Punch comes closer to the Western concept of what a communist musical would look like than the other musicals from DEFA. The politics of socialism and the GDR’s love affairs with sports and culture are never far from the storyline in this film. This doesn’t really distract from the story however, and, as light as this romantic comedy is, it’s a pretty entertaining piece of fluff.