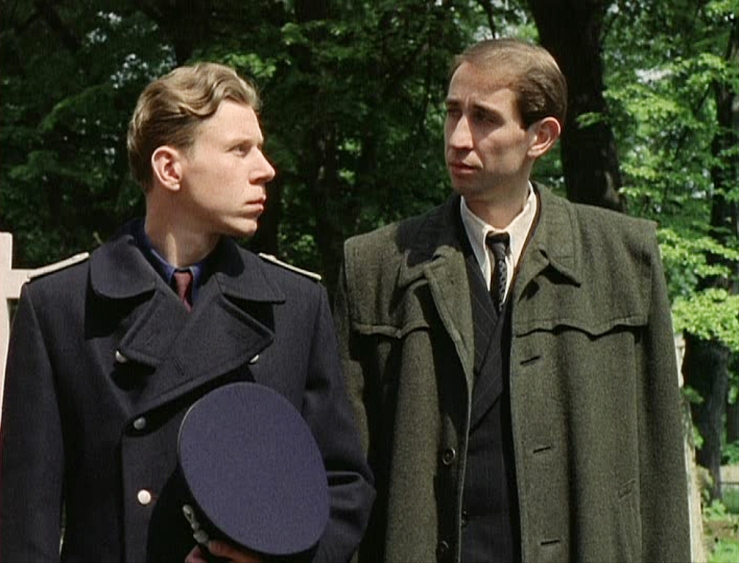 Of all the aspect of life in East Germany, the one that we Americans (and many West Germans) are the most ill-informed about is the subject of religion. Images of preachers being hunted down like dogs and tortured for believing in God were popular concepts in U.S. films and television, especially during the fifties. Anti-religion statements by Marx and Lenin were often trotted out as proof that in communist countries believing in God was tantamount to subversion. So prevalent was this attitude that President Reagan claimed that the East German government had spent thousands of dollars trying to coat the glass panels on the Berliner Fernsehturm’s sphere to prevent the appearance of a cross as a reflection when the sun shined on it (not true).

While it is true that communists have no love for religion—seeing it as a tool used by those in power to keep the proletariat in a state of numbed acceptance of their fates, waiting for some imaginary payoff after death—there is, nonetheless, a realization that if people really want to believe in such things, there’s just no stopping them. There were churches in East Germany, people went to them, and, yes, most people celebrated Christmas. Like the west, they believed in the separation of church and state, the difference was that in the GDR, that meant religious groups could not use their power to influence the government, where in the west it is taken to mean that government can’t influence the churches.

Lothar Warneke’s remarkable film, Bear Ye One Another’s Burdens (Einer trage des anderen Last) does a lot to destroy these stereotypes. In 1951, while working on the reconstruction in the newly-formed GDR, a young East German Volkspolizist named Josef “Jupp” Heiliger develops tuberculosis and is sent to Schloss Hohenfels, a clinic in Coburg. There he is assigned to share a room with a young vicar named Hubertus Koschenz. Heiliger (whose name, ironically, means “holy”) is an ardent Marxist, while Koschenz is just as ardently Christian. The two argue about politics and religion and quote the Bible and Marx to each other. Soon, Koschenz is quoting Lenin to defend his viewpoint and Heiliger is quoting the Bible to bolster his arguments for socialism.

Heiliger finds little sympathy for his viewpoints at Schloss Hohenfels. The head of the clinic is an ex-Nazi and has little use for politics of any kind; and an ardent capitalist named Truvelknecht likes to set the community room’s radio to RIAS, West Germany’s U.S.-sponsored radio station (see Look at This City!). Heiliger tries to rally people to the communist cause and Koschenz tries to start a bible study. They each find a few supporters, but most of the people at the clinic are indifferent to their causes. A few of them are going to die and they know it, and don’t have time for the young men and their philosophical righteousness. The strict head nurse, Walburga, has no patience for the young socialist, but an attractive young woman named Sonja Kubanek takes a shine to him, going so far as to pretend to read the Communist Manifesto to attract his attention.

The story is a bit of a roman à clef. It is based on the actual post-war experiences of the East German writer Wolfgang Held, who is, for all intents and purposes, the real Josef Heiliger. Like Heiliger, Held developed tuberculosis while working as a Volkspolizist clearing the rubble left after the war, and was sent to a clinic where he shared a room with a vicar his same age. In 1995, Wolfgang Held finally published the story in book form under the same title as the film.

Bear Ye One Another’s Burdens could have easily dissolved into one of those films where people endlessly argue with each other over politics—and it could have just as easily turned into a maudlin display of emotions—but Warnecke brings a light touch to the story, making it both humorous and affecting. The film is made by a filmmaker at the top of his craft, carefully composing scenes for maximum visual impact and pulling from a bag of technical tricks to create on-screen metaphors that rival the written word.

Director Lothar Warneke was in a unique position to tell this particular story. Before becoming a filmmaker, he studied theology under Emil Fuchs, the leading authority on christian socialism (and the person to whom the film is dedicated). After that, Warneke became a church vicar for a short time before deciding to go back to school for filmmaking at the film school in Potsdam-Babelsberg. He worked as an assistant director for Joachim Kunert and Egon Günther and played bit parts in various films before stepping behind the camera. His first film as director, Mit mir nicht, Madam! (Not With Me, Madam!) was a spy farce starring Manfred Krug and Rolf Römer in multiple roles, which Warneke co-directed the film with fellow Potsdam-Babelsberg alumnus, Roland Oehme.

Warneke went on to make several popular films for DEFA, but Bear Ye One Another’s Burdens was his most successful—and his last. After the Wende, Warneke, like many DEFA film people, found it harder to find film work in the newly unified Germany. He directed a few films, mostly documentaries, and later taught filmmaking at the film school at Potsdam-Babelsberg. He died in 2005.

For both lead actors—Jörg Pose and Manfred Möck—Bear Ye One Another’s Burdens was their first time in leading roles and they are well cast. The philosophical friction and verbal sparring that goes on between the two is believable and never strained. Also deserving attention are the two lead actresses, Karin Gregorek and Susanne Lüning. Ms. Gregorek plays head nurse Walburga, a part for which she was nominated for best supporting actress at the first annual European Film Awards and won the same award at the 5th Annual East German National Film Festival (Nationales Spielfilmfestival der DDR). Susanne Lüning plays the beautiful, love-starved Sonja, and brings the part a sad wistfulness. Like the lead actor, Manfred Möck, Ms. Lüning attended the Ernst Busch Academy of Dramatic Arts (Hochschule für Schauspielkunst „Ernst Busch“ Berlin). She is the daughter Barbara Dittus, who played Jutta Hoffmann’s entertaining sidekick in Egon Günther’s Her Third. Since the Wende, all of these actors have continued to act, primarily in television and on stage.

No examination of this film would be complete without mentioning the exceptional editing and camerawork. The editor was Erika Lehmphul, who edited all of the films Lothar Warneke made after Mit mir nicht, Madam. With its shift between black-and-white depictions of the past and the metaphorical use of trees to show Heiliger’s changing condition, the editing here is flawless. On a par with Ray Lovejoy’s work in 2001 A Space Odyssey. Scenes meld with each other in clever and lyrical ways. Sadly, Ms. Lehmphul’s career as an editor ended with the Wende.

The cinematographer was Peter Ziesche, a newcomer to the DEFA technical crew and a worthy addition at that. Ziesche’s work is flawless, his palette of colors is ever-so-slightly dark and vivid, giving the film a serious undertone that might have otherwise been lost. Ziesche continued working as a cinematographer after the Wende. As with most other DEFA people, he found more work in television. One of the few feature films on which he worked, Bernd Sahling’s Blindgänger (The Blind Flyers), earned him a German Camera Award nomination.

Bear Ye One Another’s Burdens was a huge hit in East Germany and was also popular in West Germany, where it won the best actor Silver Bear for both of the lead actors. It was nominated for best screenplay and best actress at the first annual European Film Awards, and won the audience award at the East German National Film Festival.