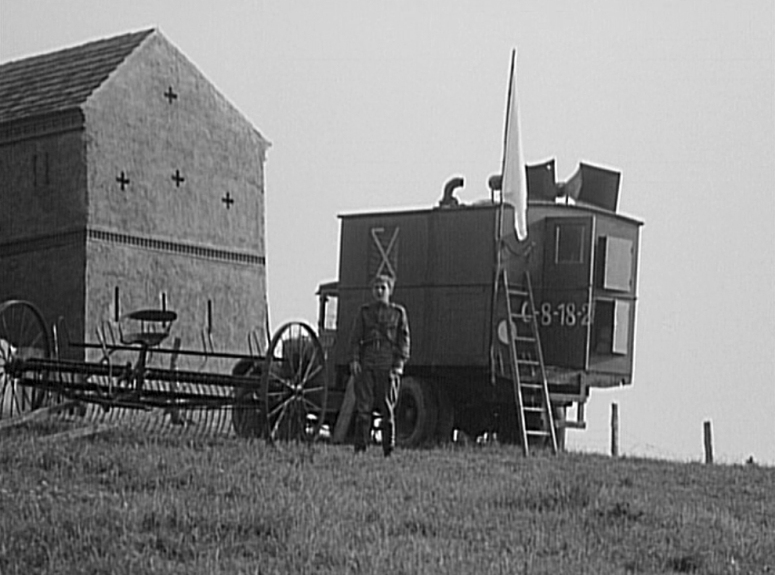 Whether it’s Spielberg exploring the social dynamics of suburban children in E.T., or Paul Verhoeven recreating the horrors of war in Starship Troopers, a director inevitably brings some of his or her own past to a picture. Every so often, a filmmaker makes a movie that is completely personal. These run the gamut, from George Huang’s film à clef, Swimming with Sharks—about his time working as an intern for Joel Silver—to Oliver Stone’s Platoon, in which Charlie Sheen stands in for Stone as a young soldier in Vietnam, to Cameron Crowe’s recreation of his early years as a reporter for Rolling Stone magazine in Almost Famous. One of the best of these comes from East Germany. It is Konrad Wolf’s I Was Nineteen (Ich war neunzehn), which is based on his diaries from World War II.

Born near Stuttgart in 1925, Konrad Wolf’s father, Friedrich Wolf, was a well-known doctor, writer, and playwright. He was a champion of workers’ rights, and founded the Spieltrupp Südwest—a theater troupe that specialized in agitprop plays. He was a member of the Communist Party, and of Jewish descent, so naturally, when the Nazis came to power, the Wolf family had to leave the country to survive. They eventually settled in Russia when Konrad was eight. There, young Konrad came into contact with the film community when his father started working with Soviet filmmakers. The boy became fascinated with the medium and set himself to learning all aspects of film production. At the age of seventeen, he joined the Red Army and soon found himself fighting for Mother Russia against his Fatherland. He was nineteen when the Russians broke through the German line. Suddenly Konrad found himself in the odd position of a German acting as the Russian liaison in Germany.

Using Wolf’s diaries, Wolfgang Kohlhaase wrote the screenplay. Kohlhaase is best known for his Berlin-based stories of modern youths, but his ear for dialog, and the regional differences in Germany, made him a good choice for the job. He knows how people speak, and, more importantly, he knows how people keep silent. Kohlhaase’s script does a good job of framing the strange, almost inenarrable emotions Wolf must have felt arriving as he did as a stranger in his homeland; ashamed of his heritage, but unable to escape it.

The film begins in mid-April, 1945; shortly before the Russians reach the Oder river in their push toward Berlin. The war is virtually over, but nobody has bothered to tell Hitler, who is holed up in the Führerbunker beneath the New Reich Chancellery in Berlin. Gregor Hecker is a young lieutenant in the Russian army, and has been assigned to travel with the troops in an old VAZ circus truck equipped with a P.A. and a record player. It’s Gregor’s job to act as translator and to broadcast surrender requests to the German soldiers still fighting along the front. In a kind of Red Army road movie, he travels across the German countryside, meeting every type of person, learning new things, and examining what it means to be German as he goes. With him on his travels are Wadim, a Russian teacher-turned-soldier who is a student of all things German; the music-loving Sascha, Hecker’s easy-going superior; and a taciturn Mongolian named Dshingis, who drives the truck. At Bernau, Hecker is made commandant, and has to deal directly for the first time with other Germans. Until now, his oft-broadcast statement that he is a German has no deeper meaning to him. It is simply a statement of fact. As he meets other Germans, his heritage becomes as much a source of shame as an asset. At a May Day feast held by the Russians for a group of freed concentration camp prisoners, Wadim asks one of these men how he is supposed to explain how the Nazis came to power to his students when he gets back to Kiev. “Goethe and Auschwitz. Two German names. Two German names in every language.” But this is an East German film and the answer—that it was the manipulation by industrialists and corporations—seems facile. At the end of the film neither Gregor nor we are any closer to understanding the mindset of the Nazis, but when he again says he is a German, it now means something.

Criticism has been leveled at the film for its soft-pedaling of the touchy subject of the thousands—perhaps millions—of rapes committed by Russian soldiers at the end of the war. With the atrocities committed against their families by the German soldiers still fresh in their minds, the Soviets wanted the German civilians—who not only seemed oblivious to what the German army did in Russia, but actively denied that it happened at all—to experience the same pain. Women and children were repeatedly raped, men were beaten and killed, homes were trashed, and belongings were stolen as the Red Army cut a swath of destruction and terror through eastern Germany that made Sherman’s March to the Sea look like an afternoon stroll. [Note: For a more thorough treatment of the subject, see Max Färberböck’s A Woman in Berlin (Anonyma – Eine Frau in Berlin), starring Nina Hoss.]

Wolf was no dummy, though. He recognized that only way he would get this movie made was if he avoided talking too candidly about this subject. Two years earlier, the government had scrapped a years worth of movies because they didn’t like what they said, so Wolf treads carefully through this minefield. When a young German woman (Jenny Gröllmann) seeks asylum with Gregor, we understand that it’s because she feels safer with him, a German, than with the Russian invaders. And when he is shipped out, we see the fear in her eyes as he leaves. This was as close as Wolf could get to tackling the subject in a film that was made with a great deal of help from the USSR—and on the fiftieth anniversary of the Russian Revolution to boot. One should never underestimate an East German audience’s ability to read between the lines. You can bet they understood what he was tip-toeing around.

Wolf often shifts his visual style to match whatever story he is telling. It is one of the reasons that, although he considered by many to be the best director to come out of East Germany, he is rarely discussed in auteur terms. In I Was Nineteen, he moves away from the dazzling camerawork that punctuated Divided Heaven to a more natural style. Still, there are many scenes that betray a skilled and controlling hand behind the camera. In the opening moments of the film, while Gregor speaks via loudspeaker to the Germans along the Oder, we see a raft drift by. On it, a gallows is constructed, and on the gallows a hangs a man with a sign around his neck that reads: “Deserter! I am a Russian lackey” (“DESERTEUR Ich bin ein russen knecht,” the last part liberally translated in the First Run Features edition of the film as “I licked Russian boots.”). In another scene, as Gregor’s truck pulls away from Bernau, the camera keeps its lens trained on Jenny Gröllmann’s character until she disappears when the truck turns, reappearing a moment later, further away now, and eventually fading into the mist.

When the troops reach Sachsenhausen, the film suddenly includes scenes from an actual documentary in which a former guard at the death camp explains how the poison gas was administered. This footage is interspersed with scenes of Hecker taking a shower. The juxtaposition is simultaneously jarring and logical; the gas chamber showers and the real shower. The impression is that Hecker is trying to wash away what he has seen, perhaps even his own German identity. In the next scene, we see Gregor and his pals interviewing a German intellectual who brings Hecker back to his German roots with one sentence. Here the film seems to mimic the documentary footage’s look. We know we are watching a dramatic recreation of events, but the effect is disorienting.

To play the lead, Wolf chose Jaecki Schwarz, a young actor fresh out of drama school. It was an inspired choice. Thrust so suddenly into a starring role, the young Mr. Schwarz could easily identify with the confused state of Gregor when he is handed responsibility for an entire town.
after I was Nineteen, Schwarz went on to appear in several more films. He has continued working since the Wende, primarily in television, playing Hauptkommissar Herbert Schmücke on the popular crime show, Polizeiruf 110 (Police Call 110), and the comic relief character Sputnik in Ein starkes Team (A Strong Team). He is an ardent supporter of gay rights, and is a member of the board of trustees for the German branch of Queer Nation.

The technical crew for this movie reads like a DEFA dream team. Besides scriptwriter Kohlhaase, Werner Bergmann, Konrad Wolf’s longtime collaborator, handled the cinematography. Bergmann had worked as a war correspondent and cameraman for the German war effort on various fronts. During the war, he lost an arm, but didn’t let this stop him from pursuing a career as a cinematographer. He made fourteen films with Wolf, and received several awards for his work. The editing was by Evelyn Carow, who would eventually become the best-known editor in East Germany, cutting such classics as The Legend of Paul and Paula, Solo Sunny, and Coming Out. This was the first film she did with Wolf, but it wouldn’t be the last.

The production design was by Alfred Hirschmeier whose importance to the development of art direction and production design in East Germany is impossible to over-estimate. Hirschmeier’s work was flawless and rarely repetitious. He was the inventor of the optisches Drehbuch (visual screenplay), a type of storyboard in script form that he used to create a film’s look and settings. A list of the films he worked on includes some of the best films to come out of the GDR, including, Five Cartridges, The Silent Star, Naked Among Wolves, Divided Heaven, Jakob the Liar, and Solo Sunny.

In 1977, Wolf would return to the subject of World War II one more time. In the film Mama, I’m Alive. Here, Wolf follows the exploits of four German P.O.W.s who decide to join the Red Army and fight against Hitler’s war machine. He assembled essentially the same technical crew as I was Nineteen (Kohlhaase, Bergmann, Carow, and Hirschmeier). It would be his last film about the war. Wolf would only make one more feature film (Solo Sunny, 1980). In 1982, he died while working on a documentary about Ernst Busch, the communist singer-songwriter.

5 thoughts on “I Was Nineteen”