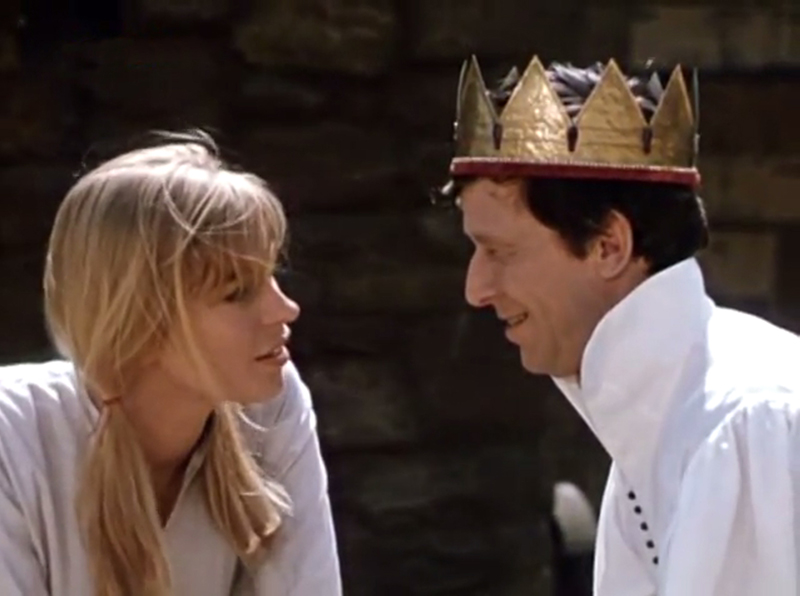 Right from the opening credits, How to Marry a King (Wie heiratet man einen König?) lets us know that this is not going to be like any DEFA fairytale film that came before it. It starts in the real outdoors, not a film set, with long shots of a woman being kicked out of her house by her father. This is overlaid by credits that go on to list not only the stars of the film, but every animal that appears in it, right down earthworms and a beetle. A few of the animals are even listed by name.

The film is based on the Grimm Brothers fairytale, The Peasant’s Clever Daughter (Die kluge Bauerntochter). Both the film and the story tell of a farmer’s daughter who manages to outwit the local king, a man who prides himself on his cleverness. The king marries the woman, but then discovers she uses her cleverness to countermand his edicts. He banishes her from his castle and tells her she can only take one thing with her, but the woman has one more trick up her sleeve.

How to Marry a King is a tricky story to pull off. On one hand, the king has to be arrogant and full of himself, but he also has to be likable enough to make it believable and understandable that the farmer’s daughter would fall in love with him. That’s a tall order. It works here thanks to the film’s slapstick comedy and Eberhard Esche’s entertaining performance. He is not really a bad person; just a bit full of himself. It’s still a little mystifying as to why she would love him, but considering her environment, I’d say it was partly a case of slim pickings. 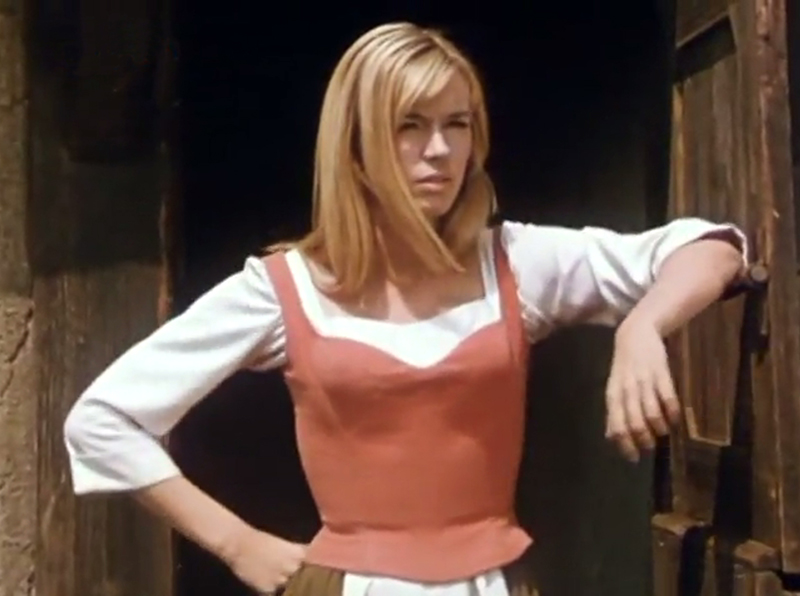 Looking for all the world like Françoise Hardy here is Cox Habbema playing the Farmer’s Daughter. A Dutch actress, Habbema started her university life as a law student, but then decided to become an actress. She went to East Berlin to perform in a play at the Deutsches Theater in Berlin where she met and fell in love with her co-star, Eberhard Esche. How to Marry a King was Esche and Habbema’s first film together, but it wouldn’t be their last. Esche and Habbema made five more movies together. In 1976, the duo was preparing to make another fairytale film, this time for television, but the plans were scuttled after Ecke and Habbema signed the letter protesting the expatriation of Wolf Biermann. Perhaps because of her law background, Habbema decided to sue DFF and won. She worked on a few more films in East Germany, but like several other of the stars who signed the protest letter, she got tired of the constant surveillance and greylisting and decided to move back to the Netherlands.

How to Marry a King was Rainer Simon’s first feature film, and this is one of the reasons that it looks so different from the previous DEFA Märchenfilme. Simon threw out the rule book on how to film a fairytale. Gone are the flat, under-adorned sets of films such as Frau Holle and King Thrushbeard. Gone are the stage-bound sets of The Singing, Ringing Tree and Little Red Riding Hood. In this film, if something happens outdoors, it’s filmed outdoors. Aside from a few indoor scenes, everything takes place in real environments. Also missing is the every-hair-in-place quality of the previous films. The characters here are messy and ugly. Their clothes are rumpled and look worn in. Some of the people look like they came straight from the paintings of Bosch and Bruegel.

Born in Saxony near the end of World War II, Rainer Simon’s parents were divorced when he was still young, and Simon grew up with his mother. He joined the SED party at seventeen, and went to the film school in Babelsberg in the early sixties. After graduating, Simon worked as an assistant director on Ralf Kirsten’s The Lost Angel and Konrad Wolf’s I Was Nineteen. His first film proposal to DEFA was to make a film of Horst Bastian’s novel Die Moral der Banditen (Outlaw Morality). Unfortunately, his proposal came right after the 11th Plenum, when anything even a little bit daring was considered taboo. His proposal was nixed (although a film of Outlaw Morality would eventually be made by Erwin Stranka in 1976). Simon went on to make several memorable films for DEFA, including How Six Made Their Way in the World, Till Eulenspiegel, and Jadup and Boel, the last of which was banned for seven years in East Germany. His film The Woman and the Stranger won the Golden Bear at the Berlin International Film Festival and introduced him to an international audience. After the Wende, Simon made one more film for DEFA (Der Fall Ö.) before the film company was dissolved. After that, Simon went to Ecuador, where he had previously made the historical drama The Ascent of Chimborazo (Die Besteigung des Chimborazo). There, he made a trilogy of films about the native people in that country. For many years, he was a guest professor at the film school in Babelsberg, and continues to live in the area. 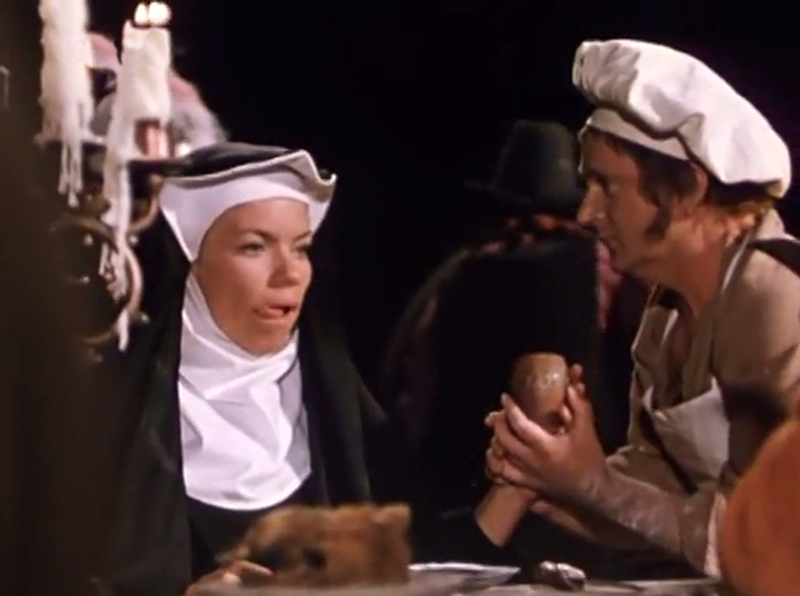 Not surprisingly, the East German film review board was not particularly happy with this film. They accused it “formalism”—an essentially meaningless term used when somebody doesn’t like a movie, but doesn’t have a well-reasoned explanation for it. They also felt that the film was not entirely suitable for children. This argument carries a little more weight. It’s quite possibly the only children’s film that features an adult woman swimming in the nude, and the wedding scene is both prolonged and Felliniesque, with a boy urinating in a fountain and a nun getting drunk.

The film managed to squeak by the review board after some positive test screenings. It did well where it played, and probably would have done even better if DEFA had done more to promote it. The film was never shown in the West until after the Wende and has never received American distribution. How to Marry a King sits in a strange place in the world of movies. It is not exactly a kids film, and it is not exactly an adult film either. It is unique and entertaining, and for those reasons alone it should be seen by more people.