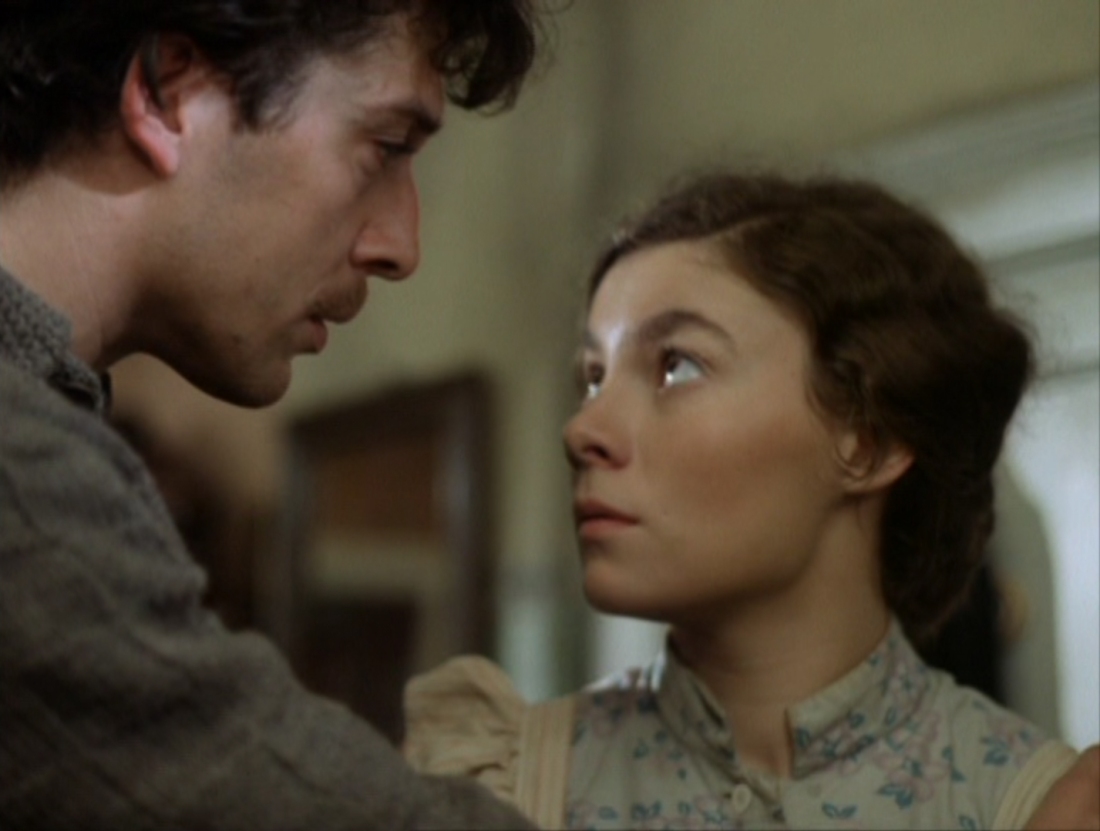 The Woman and the Stranger (Die Frau und der Fremde) was released in 1985, less than five years before the Berlin Wall came down. Like many of the late-period DEFA films, it concentrated less on the concerns of the collective than individual needs. It is probably for this reason that the film found an audience in West Germany and went on to win the Golden Bear at the Berlinale—a first for an East German film.

The film is based on Karl und Anna, a 1926 novella by Leonhard Frank, who also wrote Die Jünger Jesu (The disciples of Jesus)—the basis for Joachim Hasler’s excellent noir film, The Story of a Murder. The Woman and the Stranger starts in a Russian P.O.W. camp during the First World War. While incarcerated there, Karl becomes obsessed with fellow prisoner Richard’s wife Anna. Richard talks about her constantly, explaining every detail of their lives together. It is a life Karl wants. After a mix-up, Richard is shipped off to parts unknown and Karl takes advantage of the situation to escape. He goes to Anna, claiming to be her husband. Anna doesn’t buy it for a second, but Karl does seem to know an awful lot about her. He moves in, but what about Richard? A reckoning clearly is at hand.

The story borrows heavily from the 1560 case of Martin Guerre. Perhaps it was Guerre’s last name that inspired Frank to tie the story to World War I. In the original case, a man showed up in Artigat, France, claiming to be the missing husband of of a local woman. The man moved in with the woman and they had two children before he was found out and eventually hanged.

An eternal sticking point in the original Martin Guerre story is the matter of the wife’s complicity. How could she not know that this man wasn’t her husband? Scholars still argue over this. In Leonhard Frank’s story, there is never any doubt that Anna knows Karl isn’t her husband, but his knowledge of every aspect of her life attracts and bewilders her. The desolation, loss, and confusion that World War I brought made it a perfect platform for the story. So perfect, in fact, that a year after Karl und Anna was published, the case of the Collegno amnesiac came to trial in Italy, in which yet another man was charged with pretending to be a woman’s missing husband.

Karl und Anna caught the attention of filmmakers almost immediately. It was made into the movie Heimkehr (Homecoming) in 1928 by Joe May, and then again in 1947 as Desire Me—a fiasco of a movie that nearly killed Greer Garson, had four directors, all refusing to take credit for it, and marked the beginning of the end of Louis B. Mayer’s reign at MGM. In America, the novella was released as a Signet paperback under the title Desire Me, with a typically lurid cover.

The Woman and the Stranger is the third—and best—attempt to turn Frank’s book into a film. It was directed by Rainer Simon, one of DEFA’s best directors. Mr. Simon’s films range from fairytales (Sechse kommen durch die Welt) to comedies (Zünd an, es kommt die Feuerwehr). His style is impressively unconventional. In The Woman and the Stranger, for instance, he employs the use of color and sepia-tone to convey the various portions of the narrative. Normally this technique is used to convey part of a story that take place in the past, but here it is used to convey the internal thoughts and the external action in a most effective and unusual way. [For more on Rainer Simon, see Jadup and Boel.]

Playing Karl is Joachim Lätsch. Mr. Lätsch graduated from the Ernst Busch School for the Dramatic Arts in Berlin and started working film immediately. His first feature film was Roland Gräf’s Fariaho, The Woman and the Stranger was his second feature film. He appeared in several more East German films before the wall fell, including the seldom screened East Germ/Vietnamese coproduction, Dschungelzeit (Jungle Time). Since the Wende, Mr. Lätsch is one of the few East German actors who has appeared in more feature films than television shows.

Anna is played by Kathrin Waligura. The films marks Ms. Waligura’s first feature film appearance. In fact, she was still in drama school when she starred in this film. Mr. Simon was so impressed with her, that he cast her in two more of his films. As with many other East German actors, most of her post-Wende work has been on TV. Today, she is best known for her role as Stefanie Engel in the popular hospital series, Für alle Fälle Stefanie (For All Cases Stephanie). Most recently, she starred in Nico Sommer’s Familienfieber (Family Fever).

Playing Richard is Peter Zimmermann, another graduate of the Ernst Busch School for the Dramatic Arts in Berlin. Mr. Zimmermann started his film career in 1979 with two memorable films: Until Death Do Us Part, and Coded Message for the Boss (Chiffriert an Chef – Ausfall Nr. 5). Mr. Zimmermann continues to act, primarily in television roles, since 1994 he has taught at the film school in Babelsberg. He is married to Heike Jonca, and their daughter, Nele, has gone on to become a successful actress in her own right.

Also seen briefly in smaller roles here are Ulrich Mühe, Hans-Uwe Bauer, and Christine Schorn, all of whom have gone on to have successful feature film careers in unified Germany. Sadly missing from this roll call is Katrin Knappe, who was so memorable as the simple Boel in Mr. Simon’s previous film, Jadup and Boel. With her dark brown eyes and unique looks, we should have seen more from this actress, but after the Wende, she appeared in no more films. She continued to act, but switched to giving lectures on elocution.

As mentioned earlier, The Woman and the Stranger was the only East German film to ever win the Golden Bear at the Berlinale. This isn’t to say it was the first East German film to deserve this award—one can cite several instances where the films coming out of East Germany were better than anything coming from West Germans at the same time—but it does signal the beginning of a shift in the relationship between east and west. A shift that would come to a head on November 9th, 1989, when the border opened up for good.