Spring Takes Time (Der Frühling braucht Zeit) was one of the twelve films banned in the wake of the notorious 11th Plenum. Along with The Rabbit is Me, it is one of the only films that actually made it into the theaters before the ax came down. While some of the 11th Plenum bans seemed downright silly (see Hands Up or I’ll Shoot!), the banning of Spring Takes Time is understandable. After all, it’s a movie about how the state’s demanding quota system could lead unscrupulous management to put the lives of the workers in danger and then blame the same workers when things go south. At its heart, the film is an indictment of the very economic system the folks at the 11th Plenum were so loathe to discuss.

At the start of the film, a gas company manager named Heinz Solter is arrested for negligence that resulted in the failure of a pipeline, and the serious injury to a worker. Most of the rest of the film is told in flashbacks, where we learn that Solter is just the fall guy for decisions made by his higher-ups, in particular Chief Operations Officer Erhard Faber, who is determined to meet the state’s quotas come hell or high water.

It doesn’t help Solter’s case that he’s a reticent fellow who refuses to point the finger at anyone else, feeling that everyone in a position of power—including himself—shares some of the responsibility for what happened. It also doesn’t help that he has very short fuse, and isn’t averse to knocking someone through a glass door if he doesn’t like what they’re saying. Besides Solter’s story, much of the film revolves around his doe-eyed daughter Inge, who is dating one of Faber’s lackeys.

The film is directed by Günter Stahnke, an extremely talented director whose frequent run-ins with the authorities led to him being ostracized from DEFA. He was first criticized for his television short, Fetzers Flucht (Fetzer’s Escape), but that one was eventually allowed to be broadcast in 1962. Not so with his next short film, Monolog for a Taxi Driver (included on the Spring Takes Time DVD from the DEFA Library), which was banned outright for its pessimistic, every-man-for-himself look at life in the GDR. That film remained unscreened until the Wall came down. His first feature film, From King Midas (Vom König Midas), was met with some criticism, but made it into the theaters. Spring Takes Time was his next film. After that, Stahnke was essentially banned from DEFA and relegated to television, where he spent the rest of his career directing comedies and kids’ films. One might think the Wende would give Stahnke another chance to spread his wings, but such was not the case. His career as a director effectively ended with the dissolution of East Germany.

The movie is cast against type—perhaps as a way to show how topsy-turvy things had become in East Germany. Rolf Hoppe, who was almost always cast as a villain, appears here as a sympathetic worker in danger of being scapegoated for the failures of the gas line project. Günther Simon, who was usually cast in heroic roles—having first made a splash as East Germany’s number one hero Ernst Thälmann in the Kurt Maetzig films—here plays the devious Faber.

Solter is well played by Eberhard Mellies. While Solter is a good guy, he is also short-tempered and reticent. Mellies’ strong features and stern countenance lend themselves to this type of role. Mellies’ career in films started with a small role in Der neue Fimmel (The New Craze), after which he started appearing in various television productions. Spring Takes Time was his next feature film and almost his last. Aside from voiceovers in My Zero Hour (Meine Stunde Null) and Apaches, Mellies didn’t appear in a DEFA feature again until 1978. Like his brother Otto, who is one of the most well-known voiceover actors in Germany, Eberhard does most of his work in front of a microphone these days.

Doris Abeßer plays Solter’s waif-like daughter Inge, who obviously didn’t inherit any of her father’s stoicism. She is played here as a raw nerve, sensitive to every things that happens around her. With her enormous, dark eyes, she appears at times like a Keane kid (one reviewer compared her appearance to mask-wearing Louise (Alida Valli) in Eyes Without a Face, but I think this is pushing it). By the time she made this film, Abeßer had already appeared in nearly a dozen movies and a few TV films. Her performance in Konrad Wolf’s film Professor Mamlock as Mamlock’s daughter Ruth was especially powerful. Abeßer was married to director Stahnke. I could find no date for their marriage, but their son born in 1963, so they were already a couple by the time they made this film together. As with nearly everyone else involved with Spring Takes Time, Abeßer’s career after this film was restricted almost exclusively to television. After the Wende, she did what many East German actors did, moving from film and television to legitimate theater. She started appearing in film and television regularly again 2001, finally retiring in 2012. Abeßer died on January 26, 2016.

Much of this film’s cinematic value comes from its production design which is as angular and pristine as Stanley Kubrick’s 2001: A Space Odyssey. The production designer was Georg Kranz, a versatile designer whose work can be seen in Ursula, The Devil’s Three Golden Hairs, and Murder Case Zernik. Spring Takes Time was his first feature film, and is probably the reason the next six productions he worked on were for television. He returned to feature films with the popular Time of the Storks, and worked mainly in feature films after that. After the Wende, when most East German film technicians were effectively shut out of the film industry, Kranz found work as the series production designer for the popular TV series Für alle Fälle Stefanie. 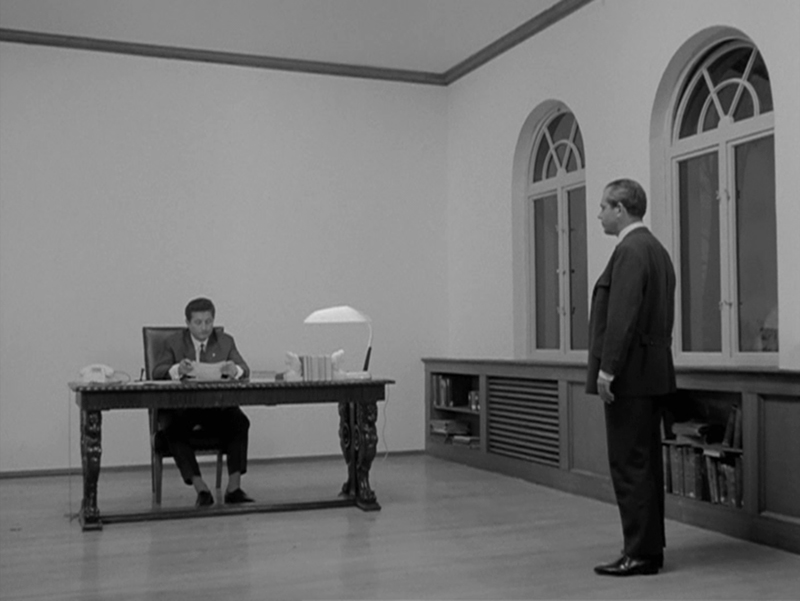 Juxtaposed with the film’s stark look is the jangly rock’n’roll score, played by a band called “The Sputniks.” The composer is listed as Gerhard Siebholz, who also did the scores for the musicals No Cheating, Darling!, and Wedding Night in the Rain. Siebholz was a very successful composer in East Germany, penning several hits songs. Unlike much of work, which has a penchant for the schmaltzy Schlagermusik so popular with older Germans, The music for Spring Takes Time sounds very much of its era, but it is also a strangely dissonant and heightens the effect that things are not quite right.

Although the term “Rabbit Films”—named after Kurt Maetzig’s The Rabbit is Me—was given to the films that were banned during the 11th Plenum, I suspect that Spring Takes Time is film that really set off the purge that followed. Especially considering that it premiered a few weeks after the Plenum, and was effectively, albeit accidentally, an indictment of the very behavior that the folks at the Plenum had just demonstrated. How could they not ban it? A look at the film histories of many of the people who worked on this film show that they were more severely punished than the people on most of the other banned films. Stahnke, Mellies, Abeßer, and cinematographer Hans-Jürgen Sasse were all relegated to television after this, with DEFA feature film opportunities for them few and far between, if at all. Günther Simon probably avoided similar treatment because he was, after all, the embodiment of Ernst Thälmann and the West German press would have had a field day if it could be proved that the man who played Thälmann was no longer being cast in films. While the SED could rail against specific aspects of the other banned films, claiming they contained anti-socialist elements, Spring Takes Time was a virtual exposé of their hypocrisy. I can’t help but wonder if some of the films that were banned in the Kahlschlag (a term meaning “clear-cutting,” often used in reference to the films banned during this period) were banned as a smokescreen to hide the fact that Spring Takes Time was the movie they really wanted to be rid of, but to ban it by itself would have called too much attention to the film.