Second only to the Indianerfilme, East German spy films offer a view of the world so antipodal to Hollywood’s version that sometimes it feels like you’ve entered (or escaped from) Bizarro World. Russians and East Germans are the good guys trying to protect the world—free and otherwise—from the nuclear threat posed by West Germans and the Americans. The biggest difference is that, unlike the films from the West, the bad guys are shown to be complex, thinking people, whose reasons for championing capitalism are based on their belief in staying loyal to their countries in spite of any misgivings about the morality of government policies. The dangers of this sort of thinking are not lost on the Germans, who know better than most what happens when patriotism is left unchecked.

Coded Message for the Boss (Chiffriert an Chef – Ausfall Nr. 5) is the story of Wolf Brandin, and East German electrical engineering student recruited by the CIA to spy on the East German government. The story starts in 1959, when tensions between the East and the West are at their highest and the border between East and West Berlin is still porous and dangerous—for both sides. Brandin is chosen because of his frequent unauthorized visits to West Berlin. They think this means he prefers West Germany’s capitalism, and they plan to leverage his frequent trespasses but what the folks at the CIA don’t realize is that he’s only doing it to help his father obtain a medicinal ointment that’s not available in the GDR. After he is approached by the CIA, he goes straight to the Stasi, who convince him to play along, putting his life in danger and threatening his marriage when he’s forced to lie to his wife. This allows them to feed disinformation to the Americans, leading to the West being caught with its pants down when East Germany builds the Wall around East Berlin on August 13th in 1961.

The film is based on Günter Karau’s spy novel Go oder Doppelspiel im Untergrund (Go, or Double-Cross in the Underground). In the book, as its title suggests, the game of Go figures prominently in the story. Brandin’s CIA contact is a fan of the game, and arranges meetings at the Go club in West Berlin. Since the story takes place right before the Berlin Wall goes up, Go’s strategies of encircling and capturing opponent territories is a perfect metaphor for what was going on in Germany at the time, but director Helmut Dziuba chose to abandon the Go theme entirely, choosing instead to make the American contact agent Dr. Baum a fan of art museums and aquariums. It’s a weaker premise, but it does help boost the idea of Dr. Baum as a sort of James Bond character; a suave ivy-leaguer who enjoys the finer things in life. As already mentioned, Dr. Baum is not the kind of one-dimensional bad guy you’d find in an American spy film. He is thoughtful and clever, and is as worried about the escalating tensions between East and West as his East German counterpart. 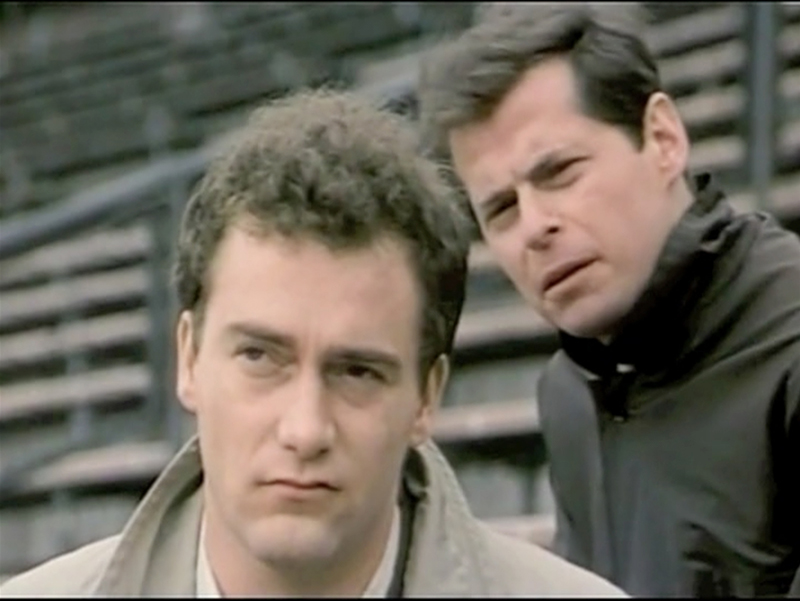 On IMDB, the title is translated as Code for the Boss: Sorty No. 5, which is not quite the title as it appears on the current English-language DVD release of the film. The second half of the title—Ausfall Nr. 5—is left out the title, which is probably just as well. “Sorty No. 5” is a perfectly acceptable translation, but the German word, Ausfall, also means failure. Since this half of the title isn’t introduced until the end of the movie, I can’t help but think that failure was part of what was meant here.

Dziuba directed the film from a script that Karau and his wife Gisela helped write. Dziuba was part of DEFA’s second generation of directors. These directors were born in the mid-thirties, so they experienced the effects of WWII, but were still too young at the end of the war to serve in the Wehrmacht. This group includes Herrmann Zschoche, Siegfried Kühn, Egon Schlegel, Lothar Warneke, Erwin Stranka, and Roland Oehme. Dziuba studied filmmaking in Russia, where he also worked for Radio Moscow, the Soviet counterpart to the U.S.’s Voice of America. As with most of the second generation DEFA directors, age and anti-Ossi attitudes prevented Dziuba from finding work once the Wall came down. His last film as a director was made for DEFA and released in 1992 (Jan and Jana). Once DEFA was dissolved, his career as a director ended. His last film credit is Die Blindgänger (The Blind Flyers), made in 2004. Dziuba died in 2012.

Brandin is played by Peter Zimmermann. A graduate of the “Ernst Busch” Academy for the Dramatic Arts. Zimmermann first appeared on screen in a secondary role in Heiner Carow’s Until Death Do Us Part. Coded Message for the Boss was his second film and his first starring role. Like most East German actors, there was some lag time between the fall of the Wall and his acceptance into television and movie production in the new Germany. During that time, he taught acting at the Academy of Film and Television in Babelsberg. More recently, he’s been seen playing Dr. Lutz Groth on the German women’s prison TV series, Block B – Unter Arrest.

Coded Message for the Boss has an excellent score by Karl-Ernst Sasse. Sasse needs no introduction here, having provided excellent scores for East German films or every type (see Her Third for more information on Sasse). Unlike many soundtrack composers, who develop specific, recognizable styles, Sasse was a bit of chameleon, creating everything from minimal renaissance music (Godfather Death), to trippy psychedelia (In the Dust of the Stars). Here he creates a twangy guitar-drive theme song that suggests a more action-oriented film than Coded Message for the Boss delivers.

As a spy film, Coded Message for the Boss is low key and realistic, much like Radio Killer. Guns are drawn and shots are fired, but only for target practice when Dr. Baum is training Brandin to be a spy. It has more in common with The Spy Who Came in From the Cold than Diamonds are Forever. It is not the best of the East German spy films—that honor goes to For Eyes Only—but it is an engaging film that never relies on fantastic, state-of-the-art gadgets to resolve plot points.