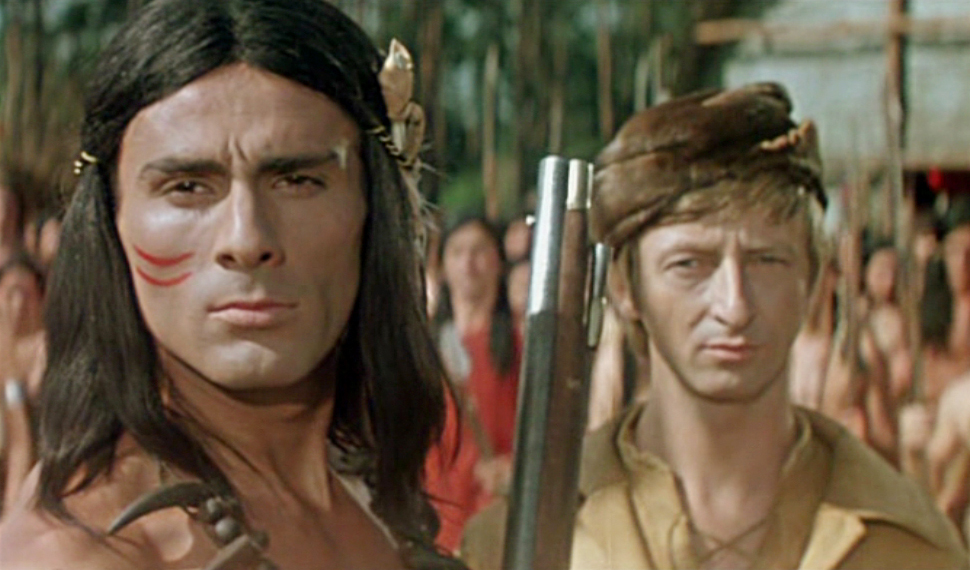 When DEFA started making westerns (Indianerfilme), they first looked to literature for stories. The only writer who was definitely off limits was Karl May, the most popular writer of western fiction in Germany. The fact that he was Adolph Hitler’s favorite author is usually cited as the reason for the GDR’s rejection of his books. This attitude toward May was largely provoked by Klaus Mann’s famous essay, “Cowboy Mentor of the Fuhrer.” In fact, Albert Einstein was also a fan of May’s books. Probably a bigger factor in the East German ban on May was the fact that by the time the GDR got around to making their Indianerfilme, West Germany had already turned several May’s books into movies (Apache Gold, Shatterhand, Frontier Hellcat, and many others).1 The East Germans looked to other sources for inspiration. For their first effort, The Sons of the Great Bear (Die Söhne der großen Bärin) by the East German author Liselotte Welskopf-Henrich was chosen. Although Ms. Welskopf-Henrich was not happy with the film—feeling that they took too many liberties with the facts—the film did very well at the box office, and helped define the direction that DEFA would take when it came to making these films The good guys were always the Indians, and the U.S. and British Armies (or the miners and cattle barons) were the bad guys. They also placed a stronger emphasis than Hollywood and the other western countries ever did on the accuracy of the costumes and tribal rituals.

So it was that Chingachgook, The Great Snake (Chingachgook, die grosse Schlange)—the second Indianerfilm—came to be based on The Deerslayer, by the American author, James Fenimore Cooper. It was an interesting choice. Cooper bore many similarities to May. Like May, his knowledge of the west was mostly anecdotal, having grown up in Cooperstown, New York and spending much of his adult writing career in England (although it should be noted, that the Cooperstown of his youth was very much a frontier town). Also, like May, he was enamored of the concept of the noble savage, and always included both good and evil Indians and white people in his books. But unlike May, the GDR authorities were okay with his work. Why this was so, given the fact that he was an American author, is hard to answer. Mostly it seems to be because he wasn’t May.

The years between the 11th Plenum and Honecker’s rise to power were strange ones for DEFA. Overnight, the neo-realism, so beloved by DEFA directors before the Plenum, was now shunned in favor of styles and genres that we usually associate with Hollywood. Frivolous fun like Hot Summer would have had difficulty getting past the authorities prior to the Plenum, but was now just what the doctor ordered. And the concept of the star system, inherently antithetical to socialistic ideals, was now endorsed in the form of Gojko Mitic, the hunky Yugoslavian actor who starred in nearly all the DEFA westerns.

Normally, DEFA took greater pains to follow books as closely as possible (or, at least, more closely than Hollywood), but they did take liberties with Cooper’s book. In the book, Natty Bumppo—the “Deerslayer” of the title—is the hero of the story, and Chingachgook is his Indian sidekick. For the film, the focus is shifted almost entirely to Chingachgook and many of the Deerslayer’s feats of derring-do (such as catching the tomahawk and throwing it back at the attacker)  are attributed to Chingachgook. The character of Hetty, the sweeter but simpler of Tom Hutter’s two daughters, is eliminated completely.

The book was the last of Cooper’s “Leatherstocking Tales,” but is the first story chronologically. At the start of the film, we see Chingachgook preparing to marry Wah-ta-Wah, the pretty daughter of a Delaware chief when suddenly she is kidnapped by Hurons. While Chingachgook paddles after his beloved in his canoe, Deerslayer and his traveling companion, Harry Hurry, take a different path in search of the girl.

For this second Indianerfilm, DEFA once again called on Gojko Mitic to play the lead. Originally a stunt man in West German/Yugoslavian co-productions, Mitic’s good looks and dark features made him an ideal choice to play a variety of Native American superheroes, from Chingachgook to Ulzana. Although he speaks excellent German, his voice was dubbed for most of his DEFA films to eliminate his Serbian accent. Also back for a second time in an Indianerfilm was Rolf Römer; this time, thankfully, not playing an Indian this time, but the Deerslayer himself.

In a role as different as possible from the one he played in Stars, Jürgen Frohriep plays Harry Hurry, one of the film’s main villains. In Stars, Frohriep  played Walter, the young German soldier who tries to save the life of the Jewish woman he has fallen in love with. In Chingachgook, his character is far less sympathetic; a rank opportunist who is not above scalping women and children for the money. Frohriep made his biggest splash in East Germany playing Kriminaloberkommissar Jürgen Hübner on the popular TV crime drama, Polizeiruf 110. He played the character more than sixty times from 1972 until the Wende. After Deutscher Fernsehfunk (DFF)—the television equivalent of DEFA—was dismantled. Frohriep found getting work difficult in the new Germany and started drinking heavily, which eventually led to the dissolution of his long-time marriage to the American-born actress, Kati Székely. Frohriep died in Berlin in 1993.

Chingachgook featured the music of Wilhelm Neef, who also did the music for The Sons of the Great Bear, and other DEFA Indianerfilme. A Cologne-born composer, Neef settled in the east after the war. Like his fellow composer, Karl-Ernst Sasse, he was primarily a classical musician, but unlike Sasse, he rarely ventured outside of the traditional classical instrumentation in his film scores. In 1972, he stopped composing for films to work on his classical pieces, penning his moving Violin Concerto (Violinkonzert) and Piano Concerto #2 (Klavierkonzert Nr. 2), which were released in 1973 on Nova records—VEB Deutsche Schallplatten’s label for “serious” contemporary music (traditional classical music appeared on the Eterna label, and pop tunes on Amiga).

Chingachgook was directed by Richard Groschopp, whose previous films, Die Liebe und der Co-Pilot (Love and the Co-pilot) and The Baldheaded Gang had been box-office hits. Chingachgook followed suit and was the most popular DEFA film in the GDR in 1967. It was also Richard Grosschopp’s swan song as a feature film director. After working on the popular TV mini-series, Geheimkommando Ciupaga, Groschopp wrote and directed two more TV movies and then retired. He died in 1996. [For more information on Richard Groschopp, see The Baldheaded Gang.]