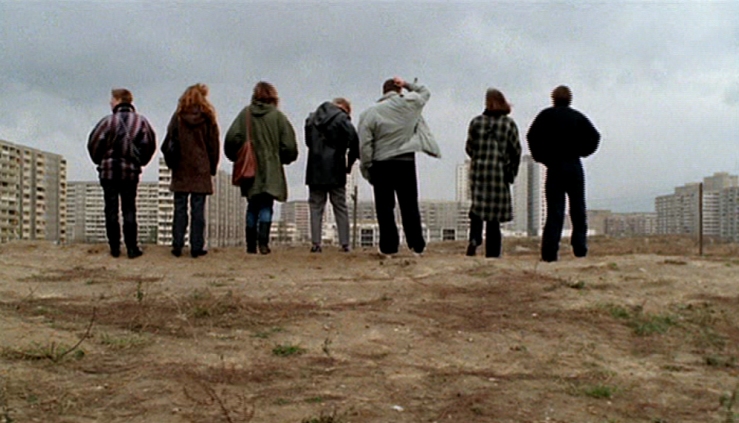 How a film fares at the box office is highly dependent on when it is released. A movie that will one day be recognized as a cinematic treasure might bomb miserably upon release simply because it wasn’t what people wanted to see at that time. A classic example of this is Billy Wilder’s Ace in the Hole (aka The Big Carnival). The cynical humor that had served Wilder so well just a year earlier in Sunset Boulevard was suddenly passé. It was the 1950s and people wanted to be happy and optimistic and anti-communist. There was no room in the Space Age for naysayers and curmudgeons. So it was too for Peter Kahane’s film, The Architects (Die Architekten), which had the dubious distinction of screening in May of 1990, seven months after the fall of the wall made the problems that this film addressed relics of the past.

The Architects follows the fate of Daniel Brenner, a young architect who finds that the rigidity of the East German system is not allowing him to realize his goals. Rather than designing the buildings of the future, he is stuck designing bus stops and grocery stores  in a sweatshop-like government office. Upon meeting his former college professor at a party, he is introduced to an official who can approve his building ideas. Brenner assembles a team from his former schoolmates. Some of them have become cynical and don’t think the state will allow Brenner to complete his project, while others have maintained their enthusiasm and are looking forward to working on something meaningful. It looks like he will finally have the opportunity to make the buildings he wants, but, of course, bureaucracy gets in the way. All of the more innovative aspects of the architects’ design are nixed as impractical. Brenner’s obsession with the project eventually does in his marriage when his wife files for divorce and immigrates to Switzerland with their daughter. At the center of the project, a sculpture titled “Family in Stress” (reflecting Brenner’s own problems) is rejected for not sending the right message. “Family in Socialism,” the authorities decide, is a much better idea. In the end, Brenner gets his opportunity to create new buildings, but the cost proves to be too high.

The film is based on a story by screenwriter Thomas Knauf about the experiences of his friend, Michael Kny. In the late seventies, Kny and 17 other architects were asked to design the cultural centers and restaurants for the vast new complex of plattenbauen in Marzahn. By the end of the project, most of the architects had become so disgusted with the process that they quit the field altogether. Michael Kny soldiered on, and continues to work as an architect as one half of Kny & Weber Architects in Berlin.

The story had more than a little relevance to Peter Kahane. Born in 1949—the same year that East Germany was founded—Kahane and his contemporaries spent most of the seventies working as assistants. On the rare occasions when they were afforded an opportunity to make a film, it was usually for television only. Attempts to address the authorities at DEFA and the Ministry of Culture about this situation were either ignored or repressed. This was largely due to the two men in charge of these institutions: Horst Pehnert and Hans Dieter Mäde.

Horst Pehnert was the Head of Film Division of the Ministry of Culture and Hans Dieter Mäde was the general director of DEFA. From 1978 until 1988,  they had the last word on what films got made and who made them. It became clear that neither man—but Mäde especially—had any interest in promoting young filmmakers. Year after year, film-school graduates tried to show what they could do, but opportunities rarely came. Filmmakers had to submit “debut films” for review before they could be awarded a directing contract. A bad debut film, and a filmmaker might be denied another chance for several years. At the time of the Mauerfall, some of these young filmmakers had already submitted five debut films. During Mäde’s reign, he only awarded two directing contracts to young filmmakers. One of these was to Peter Kahane.

Peter Kahane first approached DEFA with the idea for this movie in December 1988. At that time, the wall was a formidable as ever. and the East German press was scrupulously avoiding any mention of the protests that were occurring in various parts of the country. Approval was given to make The Architects in December of 1988. Nonetheless, DEFA continually postponed the start of production throughout most of the following year. Filming finally began on October 2, 1989.

By this time, things had heated up considerably in East Germany. Two months earlier, Hungary had opened its border and thousands of East Germans fled the country through this passage. In Prague and Warsaw, still more sought extradition through the West German embassies, and were eventually granted it, they boarded a train for the west which went through East German. People lined up to see the train and a few brave souls attempted to jump on. Meanwhile starting on Monday, September 4 at the St. Nicholas Church in Leipzig, attendees began staging peaceful protests after their prayer meetings. By October 9—two days after the celebration of the fortieth anniversary of the German Democratic Republic—over 70,000 people attended the march. The following week, over 120,000 people showed up The week after that, the number increased to 320,000; and this in a city with a population of 500,000 people! Some of the officials in East Germany were still hoping against hope that the Russians would come and fix this mess, like they did in 1953, but this time the Russians weren’t having any of it. In a feeble attempt to stave off further protests, the politburo ousted Honecker (claiming it was for health reasons) and replaced him with Egon Krenz, an ineffectual apparatchik who had spent his entire career avoiding rocking the boat. But by now, the boat wasn’t just rocking: it was foundering, The East German state was leaking worse than a Louisiana levee, and on November 9, 1989, the levee broke.

Shortly before what was supposed to be a run-of-the-mill press conference, politburo member, Günter Schabowski, was handed a memo stating that East Germans would be allowed to travel abroad. The ruling was supposed to take place the following day, giving the officials time to set new procedures in place; but nobody had bothered to inform Schabowski of this. When asked when the ruling would take effect, he replied, “As far as I know, it’s effectively immediately.” (“Das tritt nach meiner Kenntnis… ist das sofort, unverzüglich.”) At first, people blinked and wondered what Schabowski was talking about, and then the realization of what he said sank in. People thronged to the border crossings requesting to visit the west, but the guards had heard nothing of Schabowski’s statement. They frantically called for instructions on what to do, but party officials were in short supply that night (I’ll talk more about this in my next post). At first, they were told to let people through, but to mark their passports so that they couldn’t come back into the country. This was rescinded a few hours later and everyone was allowed to cross freely back and forth across the border. That night was an all-night party in the west, with East Germans thronging the city buying all those things they couldn’t get in the GDR. Within hours every store in West Berlin was sold out of fruit, candy, and porn.

Meanwhile, Kahane kept filming. Like the film’s protagonist, he was single-minded in his goal, and what was happening in East Germany at the time was just background noise. On the night of Schabowski’s press conference, Kahane and his crew were filming on at the Electrical Industry building on Alexanderplatz. An American press team came up to them and asked what they would do now that they were free. “We thought the Americans had lost their marbles,” Kahane said. “The wall was an immutable certainty. Nothing was as certain as death and the Wall.”

The film received an obligatory screening in May of 1990, but the East Germans weren’t interested in reliving the recent past and the West Germans were never much interested in anything that the GDR had to offer. The film tanked at the box office and wasn’t shown again in Germany for several years (it played in the states in 1993).

But only part of the blame for this can be laid at the feet of the Zeitgeist. The Architects is a hard film to love. For one thing, its protagonist—like the main character in Your Unknown Brother—spends most of his time in a deep funk. But unlike Your Unknown Brother, there are no scenes of Kafkaesque peculiarity to break things up. Instead, Kahane uses shots of the stark plattenbauen of Marzahn for the interstitial scenes. Kahane infuses the film with very little humor, and when he does it is usually mordant. Most of the time people are either expressing their pessimism or having their hopes shot down. In this respect, the film accurately reflects the feelings of many East Germans prior to the Wende, but that doesn’t necessarily make for fun viewing.

In one of the final scenes, we see Brenner standing on the far side of the Brandenburg Gate, trying to spot his daughter on the distant platform that Wessis used to gawk and jeer at the Ossis (we’ll see this platform used for humorous effect in the 1999 comedy, Sonnenallee). Like everything else in his life, Brenner’s attempt to see his daughter is a study in futility; the platform is too far away and there are too many people on it. When this scene was shot, the border was already open and the wall was in immediate danger of being torn down. Kahane had to position the cameras carefully to avoid showing the lighting platforms that the western news media were using to broadcast events. Perhaps, had Kahane incorporated the Wende into his script, the film would have fared better at the box office. It would have, at least, added a note of optimism to an otherwise bleak story. But as a document to the frustrations that creative people faced in the GDR, it is unparalleled.