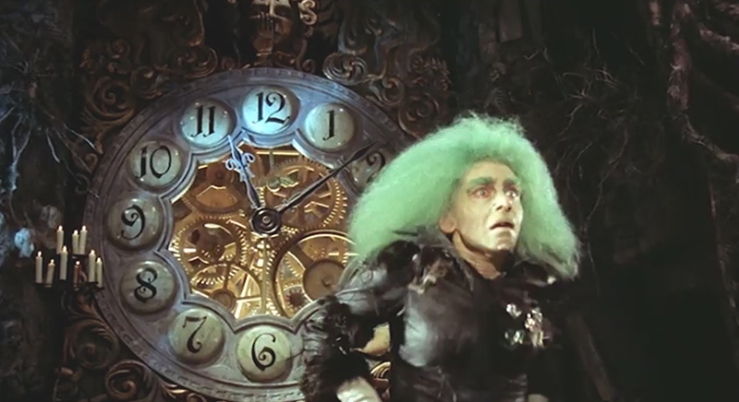 A modern fairytale about two kids in an elevator that descends into a wasteland where they encounter a blind horse, a knight in dirty underwear, a green-haired witch, and giant spider with an eyeball in its backside.

Alongside the fairytale films that DEFA made throughout its existence, they also made a few films that would have been considered fairytales, were it not for the fact that they took place in modern times. The first of these was In Search of the Magical Bird (Die Suche nach dem wunderbunten Vögelchen). The film takes place in the modern world, but almost every other element in this film is fanciful and befitting a fairytale. The line between what constitutes a fairytale and what doesn’t is a blurry one.

When You’re Older, Dear Adam, has many of the elements of a fairytale, but its point had enough political ramifications to get it banned in the wake of the 11th Plenum. Perhaps it was for this reason that on one would approach the idea of a contemporary fairytale again until 1977, with the release of The Little Magicians and the Big Five (Der kleine Zauberer und die große Fünf).1 Others followed, including Motoring Tales, The School Ghost (Das Schulgespenst), and Ol’ Witch (Olle Hexe).

Ol’ Witch began filming after the Wall came down, but production on the film started before the events in November. The film wouldn’t be released in theaters until 1991, well after reunification. Like many of the films made at DEFA during its final years, the combination of the freedom to make movies without the previous restrictions—political, from the East and commercial from the West—led to some of the most imaginative moviemaking in Germany since the Weimar Republic.2

Ol’ Witch begins when Paul (Tobias Gottschlich) and his mother movie into a new apartment in a one of those typical GDR high-rise apartment buildings (see Plattenbau). Almost immediately, he starts feuding with Anna (Anne Szarvasy), a girl about Paul’s age who also lives in the building. When the two start arguing over which floor the elevator should go to, the elevator plummets into a desolate wasteland ruled over by a green-haired witch who thrives on their conflict. The more they argue, the stronger she gets. While trying to extricate themselves from this alternate world, the two join forces with a blind horse, a cowardly knight wearing only his helmet and a dingy gray union suit, and a stop-motion animated clock without hands. Each of these characters has lost something to the witch and are ready to try and save the children from the witch.

The similarities to The Wizard of Oz are obvious, and the film also contains hints of The Neverending Story, Sleeping Beauty, and the fairytales of Wilhelm Hauff. Unlike L. Frank Baum’s Oz, there is no suggestion here that what’s happening is just a dream. When the children return to the real world, the knight, the horse, and the alarm clock come with them. 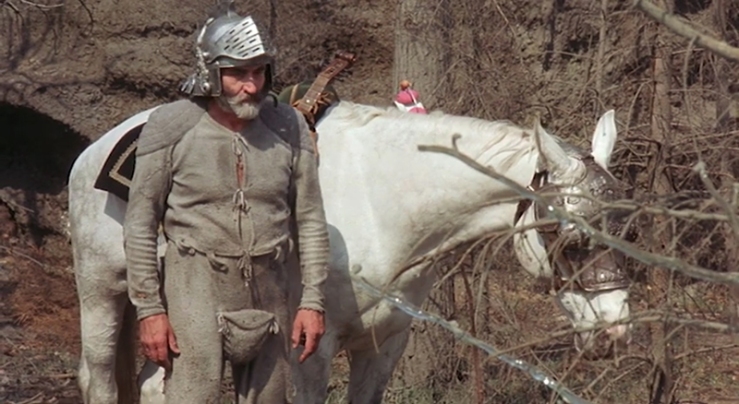 Born in 1940, Günter Meyer was one of the younger directors at DEFA. Not quite a member of the Nachwuchsgeneration (Baby Boomers), but young enough to remember very little of the War. He is best known for his “Spuk” (ghost) films and television series which tell the stories of various spirits returned to life in the present day (and maybe, if I can get a hold of all of them, I’ll write about these too at a future date). Initially, Meyer had planned to write crime novels, but thanks to his diploma thesis on the film representations of spies in For Eyes Only and Black Velvet,2 he was approached by DEFA to direct a short documentary about children’s drawings. He found working with children so enjoyable that he decided to devote his career to children’s films.

After the Wende, Meyer continued to work, creating a trilogy of further Spuk films. In 1993, he created the TV series, The Trotskies (Die Trotzkis), a comedy about a fictitious family in Leipzig who had been perfectly happy in the GDR but now finding their lives upended by reunification. Western newspapers reacted strongly to the series—particularly the right-wing Bild—finding the idea of people who could prefer socialism to the glories of capitalism too much to bear. Although the show proved to be popular, especially in the formerly East German states, the show only lasted one season. Meyer retired in 2005 and returned to his hometown of Thum in Saxony.

For Anne Szarvasy and Tobias Gottschlich, this was their first movie. Anna later would appear in Günter Meyer’s eight-part TV-series, Sherlock Holmes and the Seven Dwarves (Sherlock Holmes und die sieben Zwerge), but acting apparently didn’t call to her. She studied communication science in Dresden and Berlin and published The Advertisement in Crisis Communication: Use and Visual Design (Die Anzeige in der Krisenkommunikation: Verwendung und visuelle Gestaltung) in 2008. She currently lives and works in Dresden. Tobias, on the other hand, continued to work in the entertainment industry, first as a driver then, more recently, as the creative producer on Rising High (Betonrausch), which is currently available on Netflix.

Much of the film was shot near the Boxberg Power Station in Saxony. At the time, the area was home to some of the dirtiest, most desolate landscapes in all of Germany, thanks to the strip mining of Lignite (brown coal).3 It’s an ugly landscape, more reminiscent of the wastelands in the Mad Max movies than the worlds of Scheherazade and the Brothers Grimm. But the most expensive portion of the film to shoot was the final sequence in the Witch’s castle. Heinz Röske was the production designer. Röske got his start as a set decorator on The Sons of the Great Bear, and worked on nearly every DEFA western (Indianerfilm). He was also the production designer for the daffy DEFA-Disko 77 and more realistic dramas such as Coded Message for the Boss and Jana and Jan. The Wende did him no favors, coming, as it sis in his fiftieth year. He did, however, work on a few films after reunification, including Conversation with the Beast (Gespräch mit dem Biest), directed by and starring Armin Mueller-Stahl, and Volker Schlöndorff’s The Ogre (Der Unhold).

Ol’ Witch is worth a look. Günter Meyer is playing with some heavier concepts here than one might notice at first glance. The idea of the protagonists wandering around a landscape under constant surveillance by trees with eyes and ears certainly might have given pre-Wende East German audiences a chuckle, but it also might have irritated the authorities. As it stands, by the time the film came out, the idea appeared more as surrealism than social commentary. It’s still a kids’ film, and will appeal more to the younger set, but, unlike many children’s film, adults should find it interesting as well.

1. This story of a young witch-in-training predates Harry Potter by twenty years.

2. For prime examples of this, see The Land Beyond the Rainbow and Latest from the Da-Da-R.

3. While East Germany gave lip service to the need for environmental awareness, the fact was that the GDR relied heavily on brown coal as an energy source, and brown coal is a notoriously dirty. In 1984, East Germany was cited as the most polluted country in Europe.