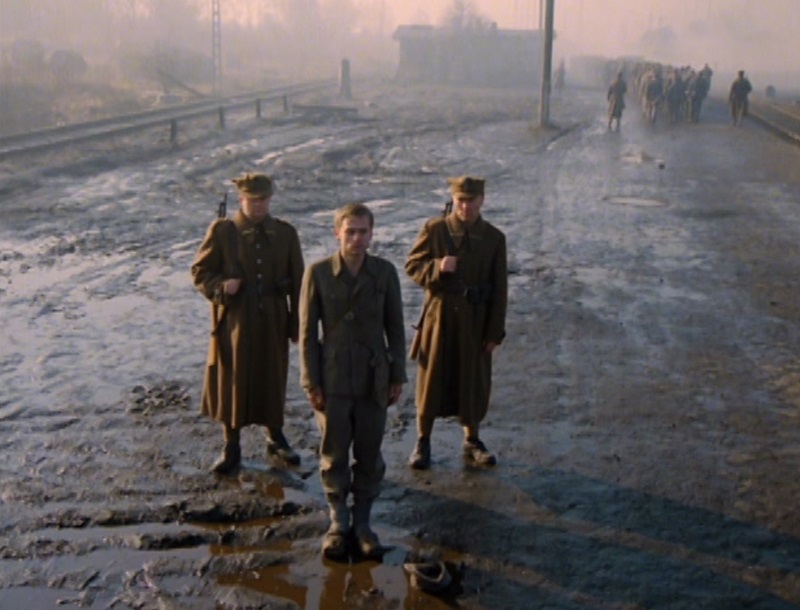 The backstory of Held for Questioning (Der Aufenthalt) is the story of a film that was made against all odds, by a director that DEFA had, essentially, written off the books. Frank Beyer was one of the best filmmakers in East Germany. He proved this time and again, with movies such as Five Cartridges, Naked Among Wolves, and Star-Crossed Lovers; all of which were critically acclaimed on both sides of the Iron Curtain, He was also responsible for delivering East Germany’s only Oscar-nominated feature (Jakob the Liar); a film so good that Hollywood was quick to remake it (badly) in their own image. Watch Beyer’s films and you’ll see why. Here’s a director who understands the film medium better than most other directors—West and East.

You’d think this would have made him the darling of DEFA, but that was not how the GDR worked. In 1966, he got in trouble after the 11th Plenum, when the authorities decided that his film Trace of Stones was anti-socialist. Beyer was relegated to TV, and wasn’t allowed to make another feature film until 1974, when he made Jakob the Liar. The film was such a hit that he was allowed to return to feature filmmaking once more.

After Jakob the Liar, he made The Hiding Place (Das Versteck), a romantic comedy inspired by Ingmar Bergman’s Scenes from a Marriage. It starred the always popular Manfred Krug and Jutta Hoffmann and had nothing particularly controversial in it, but right before the film was slated for release, the East German authorities decided it would be a good idea to expatriate Wolf Biermann while the folksinger was on tour in Cologne. Over one hundred writers, actors, directors, poets and other artists signed a letter of protest against the move. Four of those who signed the letter included Manfred Krug and Jutta Hoffmann—the stars of The Hiding Place—as well as the film’s screenwriter Jurek Becker and director Frank Beyer. The film was given an extremely limited release and quickly shelved. All four people were essentially blacklisted, with Krug, Hoffmann, and Becker moving to West Germany to get away from the work restrictions and constant surveillance. Beyer stayed behind, but once again found himself relegated to the world of television. Perhaps as an act of defiance, he went to West Germany and made a film starring Angelica Domröse and her husband Hilmar Thate, who, like Krug and Hoffmann, had signed the Biermann protest letter, and then left East Germany because of the punitive measures taken against all the signatories. At this point, it looked like Beyer would never be allowed to make another feature film in East Germany.

One night, while talking to screenwriter Wolfgang Kohlhaase, Beyer mentioned that he would love to make a movie out of Hermann Kant’s semi-autobiographical novel, Der Aufenthalt (literally, The Stay), but he felt that the book’s interweaving stories would be too unwieldy for a film. Kohlhaase had a solution. “Just focus on the story of Mark Niebuhr, the nineteen-year-old German soldier who, at the end of WWII, is mistakenly identified as an SS officer and thrown into prison.” Beyer liked the idea, but DEFA wasn’t ready to let him back into the fold. They only relented after author Hermann Kant gave DEFA the ultimatum that either Beyer directed the film or no one would. And so, Held for Questioning was made.

As you might guess from the subject matter, Held for Questioning is a grim affair. The story starts in a railway yard, when a women identifies Niebuhr as the SS officer responsible for the murder of her daughter at Lublin. Things go quickly downhill for Niebuhr after that. Nobody will tell him what it is he’s supposed to have done. From his perspective, events are playing out like Franz Kafka’s The Trial. At first he is kept in solitary confinement, then released into the main prison with Polish prisoners who hate him. Later he is moved to the cell containing other German officers, and it is here that he learns of the heinous crimes his fellow inmates committed. He begins to understand that, while not guilty of the charge with which he’s accused, he is, at least, guilty of not bothering to pay attention to what was happening around him, and of helping their actions.

A story like this could be easily ruined by a less talented filmmaker, but Wolfgang Kohlhaase and Frank Beyer are far too good at their craft to fall into that trap. As usual, Kohlhaase leaves enough space between events to let you fill in blanks, and Beyer knows just how to direct it. In one scene, two Polish girls flirt with the handsome young Niebuhr, until they learn what he’s accused of. They look on him in horror. It is also the first time Niebuhr hears just what it is he’s charged with.

Playing Mark Niebuhr is Sylvester Groth in his first feature film. Groth’s career in East German films was short. He made his last film for DEFA in 1986 (Das Haus am Fluß—The House on the River). While visiting Austria as a guest actor, he decided not to return to the GDR, and began his career in the West. With his expressive and striking features, it didn’t take long for him to find work in West Germany, and then later in Hollywood. He has appeared in numerous films, including Inglourious Basterds, The Reader, The Man from U.N.C.L.E., Whisky with Vodka (Whisky mit Wodka) and many more. Recently, he’s become familiar to American television viewers as Walter Schweppenstette in the popular TV series Deutschland 83, and for portraying Walter Ahler in NSU: German History X.

Held for Questioning was a critical success, and won several prizes. It was scheduled to be shown at the 1983 Berlinale, but it was pulled from the film festival and banned from any international distribution after a Polish military attaché denounced the film as anti-Polish. It was nothing of the kind, of course, but the attaché spoke very little German, and objected to the fact that the Germans made a movie in which the protagonist was imprisoned by Polish soldiers. It didn’t help that the Polish military officers were still wearing the same outfits in 1983 that they wore in 1946. With the recent clashes between the Polish government and the Solidarity movement, the film took on an entirely new subtext that neither Beyer nor Kohlhaase had meant or anticipated. After that, it was only allowed to be shown in the the state-owned theaters in East Germany.

In spite of the Polish objections to it, Held for Questioning was a popular film with audiences and critics, and it helped Beyer get back in DEFA’s good graces. Unfortunately, his return to feature films didn’t last long. Six years later, the end of the GDR also meant the end of the careers of many fine East German filmmakers and technicians. Beyer found himself once again relegated to the world of television, this time thanks to the forces of West German exclusivity rather than East German retribution.

Buy or stream this movie.

One thought on “Held for Questioning”