Road movies are common enough to warrant their own category. Whether the characters in a film are trying to get from point A to point B (The Straight Story, Vanishing Point), or simply enjoying the passing parade of life on the road (Easy Rider, Il Sorpasso), road movies have a special appeal. Although sometimes they end in tragedy, road movies are often about the experiential learning a journey can bring. They tend to be episodic, with the main characters encountering different people with different beliefs and values during their journeys.

Road movies are especially popular in United States, where miles and miles of highways allow a story to spool out over several weeks and in different environments. For East Germans, the idea of the road movie was a little more complicated. You could travel, but it was usually restricted to communist bloc countries, and your papers better be in order or you might not make it over the border, or even back home for that matter.

Next Year at Lake Balaton (Und nächstes Jahr am Balaton) takes a humorous look at the problems an East German tourist might encounter when traveling. The film centers around Jonas and Ines, young lovers who plan to spend their summer vacation camping on the Baltic Coast. Ines’s parents, however, have other plans, and decide that the two kids should join them on a trip to the Black Sea. Once aboard the train, it becomes clear that the parents are already thinking about marriage, which freaks out Jonas. He decides hop off the train and finish the journey alone by hitchhiking to Bulgaria. After Ines’s mom misses the train while buying a magazine, Ines’s father gets pulled off the train at the border crossing for suspicious luggage leaving Ines to complete the train journey alone. From here on out, the movie jumps between the separated travelers to show their progress toward the vacation destination.

Most of the story centers around Jonas, who hooks up with Shireen, a hippie-dippie Dutch woman on her way to India. Being an appropriately cynical East German, Jonas doesn’t have much use for Shireen’s mystical mumbo-jumbo, but he finds her attractive. Meanwhile, Ines’ mother, Irene Moldenschütt, has gotten a ride from a very peculiar old man, played by the always dependable Fred Delmare (see Black Velvet).

Jonas is played by René Rudolph, who looks like the perfect stereotype of an East German hipster: long, blond hair, parted in the middle, unkempt mustache, round glasses, a cheap denim jacket, and flared jeans. It’s a look that went out of fashion in America in 1972, but was apparently still going strong in East Germany eight years later. Shireen is played by Kareen Schröter, who is also decked out in appropriately hippie fashion when she’s wearing anything at all. Both of these actors got their starts in director Herrmann Zschoche’s coming-of-age love story Seven Freckles, and both actors quit films before the Berlin Wall came down. Schröter appeared in a couple more films before giving it all up to study psychology. Rudolph appeared uncredited in one more of Zschoche’s films (Swan Island), but that was it. 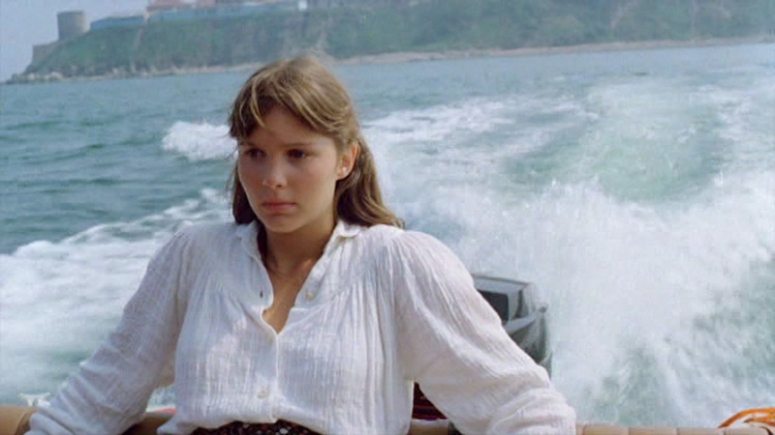 Playing Ines is Odette Bereska, who looks a bit like Anna Brüggemann here. Bereska was primarily a stage actress. She had appeared in an episode of the popular East German courtroom series Der Staatsanwalt hat das Wort (The Prosecutor Has the Floor) before this, but Next Year at Lake Balaton was her first feature film. She made a few more films with DEFA prior to the Wende, but since reunification, she’s worked almost exclusively in theater, both on stage and behind the curtains. From 1991-2005 she was the chief dramaturge at the Carousel Theater at the Parkaue (now known as Theater an der Parkaue. In 2006, she starred in the short film …es wird jemand kommen, der ja zu mir sagt (English title: Ruth).

Next Year at Lake Balaton is based on the book Ich bin nun mal kein Yogi (But Then, I’m No Yogi) by Joachim Walther. Born in 1943 in Chemnitz, Walther is a prolific writer of books, short stories, essays and radio plays. He grew up in Chemnitz, which was renamed Karl Marx City (Karl-Marx-Stadt) in 1953 (it returned to its original name after the Wende). In 2001, he and fellow East German Ines Geipel created the Archiv unterdrückter Literatur in der DDR (Archive of Suppressed Literature in the GDR). Geipel began her writing career after the Wende. Born in Dresden, Geipel had been an athlete and was a victim of East Germany’s Staatsplanthema 14.25 (State Plan 14.25.)—a covert plan to feed around 12,000 athletes stimulants, hormones, and anabolic steroids to improve sports results. Both Geipel and Walther were honored in 2011 with the Antiquaria-Preis (Antiquaria Prize) awarded every year in Ludwigsburg.

The film wasn’t the hit that Seven Freckles was, but it was popular, and won the youth magazine Neues Leben’s prize for the best DEFA film that year.1

1. It wasn’t the best DEFA film of 1980. That honor would have to go to Solo Sunny, but 1980 was a good year, with films such as All My Girls, The Fiancée (Die Verlobte), and Godfather Death being released.

One thought on “Next Year at Lake Balaton”