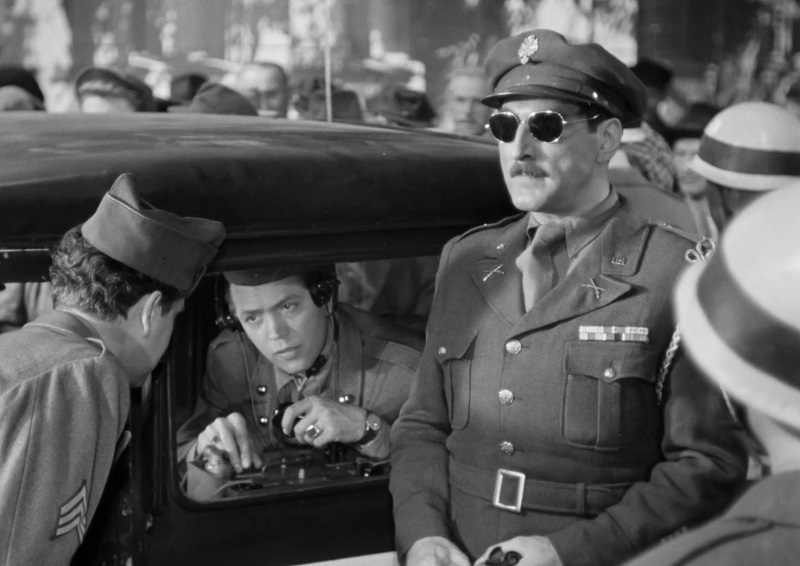 If you look up The Condemned Village (Das verurteilte Dorf) on Wikipedia (either the English or the German version) you’ll find it described as a “propaganda film.” You could argue that point, but if you look up The Steel Fist, My Son John, Red Snow, or Walk East on Beacon—all made the same year as The Condemned Village—you’ll find them described as “drama” and “adventure” films, or as “film noir.” Only later in their descriptions does the fact that these films are all virulent anti-communist even come up. Clearly, “propaganda” is in the eye of the beholder and the writers of these capsule reviews are most likely from the West.1

The Condemned Village tells the story of a village that rises up in protest against American plans to level their village and turn it into an airbase. The story starts when Heinz Weimann (Günther Simon) returns to the Bavarian village of Bärenweiler after spending five years in a Soviet P.O.W. camp. Weimann is a cheerful fellow in spite of his wartime experiences, but he’s also a communist, which rankles the local bigwigs. Weimann tries to disabuse them of the nonsense they’ve heard about communism, but they don’t pay much attention at first. Meanwhile, his childhood sweetheart Käthe (Helga Göring) has married Fritz Vollmer (Albert Doerner), an avaricious reptile of a man who can’t wait to get out of Bärenweiler.

Things come to a head after the U.S. Military shows up and decides that Bärenweiler would be the perfect place to put their new airbase. The locals at first try to do things “by the book,” but it becomes apparent that the government is going to do whatever the Americans tell them to do. The local priest appeals to the church, but the church isn’t interested either. Eventually, the townspeople decide that their only course of action is passive resistance. Weimann contacts his friends in local unions and they join the cause.

The story was written by the husband and wife team of Jeanne and Kurt Stern, and is reportedly based on an article they read about a similar protest in the Bavarian town of Hammelburg.2 The Sterns had been active in the Communist Party since before the War and joined the SED as soon as it was formed. The couple were part of the Intelligenzsiedlung (Intelligentsia Settlement), an exclusive neighborhood in Berlin’s Pankow-Niederschönhausen district reserved for creative-types and intellectuals who supported the Socialist Unity Party of Germany (SED). Most of Kurt Stein’s work was in journalism, while Jeanne worked as a translator. They only wrote three feature film scripts. They also worked together as writers and directors of the 1962 documentary Unbändiges Spanien (Untameable Spain). Kurt died shortly before the Wall came down, while Jeanne lived to see her dream of a socialist state collapse under the forces of capitalism.

DEFA had wanted Falk Harnack to direct the film, but Harnack found the script formulaic and clichéd. It was obviously an attempt to duplicate the style of the socialist realism popular in the Soviet Union, but directors such as Maetzig, Harnack, Staudte, and others were trying to create something new; a more objective, less strident approach to storytelling. Other directors were approached but turned down the job. Eventually, Martin Hellberg was hired to direct the film

Up until that point, Hellberg wasn’t a filmmaker; he worked in theater. He got his start before the War, but, being a member of the KPD, he found it nearly impossible to find work once Hitler came to power. His unwillingness to renounced his political beliefs led to his exclusion from the Reich Chamber of Culture (Reichskulturkammer) in 1942. Like every able-bodied man in Germany, he was eventually drafted, but managed to get through those last years of the Third Reich relatively unscathed. After the War, he worked as a theater director in Munich, but found West Germany almost as hostile to his political beliefs as the Nazis were. In 1949, he moved to East Germany, working as a theater director in his hometown of Dresden.

The Condemned Village was his first film as a director and it was a hit. This led to more directing gigs at DEFA. His films include The Ox of Kulm (Der Ochse von Kulm), The Judge of Zalamea (Der Richter von Zalamea), Intrigue and Love (Kabale und Liebe), Emilia Galotti, and Minna von Barnhelm, or the Soldier’s Fortune. His last film as a director was the East German film adaptation of Much Ado About Nothing (Viel Lärm um nichts). Thereafter, he worked in films only as an actor and won praise for his performance as Goethe in Lotte in Weimar. He died in 1999 in Bad Berka, near Weimar. 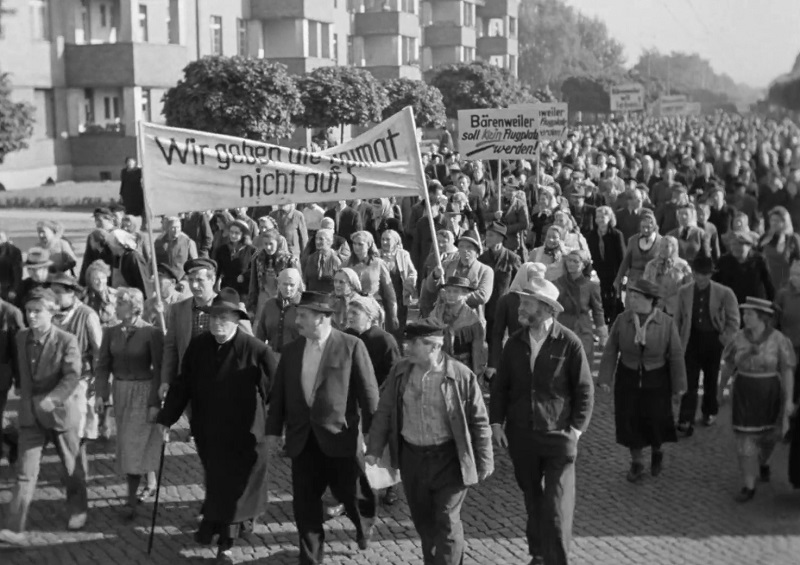 The Condemned Village starred Günther Simon and was his first film. It’s apparent from this film that he was a shoo-in to play Ernst Thälmann in Kurt Maetzig’s films. He is a commanding presence in this film (for more on Simon, see My Wife Wants to Sing). Playing opposite him is Helga Göring. This is her first feature film as well, but it wouldn’t be her last. She appeared in over 100 films and television shows in East Germany, plus several more after the Wall came down. She started acting in theater in 1940 after graduating from the Academy of Music and Theater in Dresden. For a time, after the War, she used the stage name “Helga Bonnet” to avoid association with Hitler’s favorite drug addict, Hermann Göring. After seeing Göring in Erwin Anders’ short film Kann mir gar nicht passieren (It Can’t Happen to Me), Hellberg cast her as the lead in his film. She has a tough job here. She has to make Käthe sympathetic while acknowledging that the woman did marry the most repulsive man in the town. Somehow, she manages it.

Less effective are the “American” soldiers, most of whom sound like they’ve never heard the English language spoken before. Wolf Kaiser plays the main heavy here. His name is never given. He’s simply “The Colonel.” The Colonel is a strutting, sunglass-wearing martinet, equal parts Patton and MacArthur. He’s hell-bent of leveling the town whether the locals like it or not. Kaiser attempts to speak German with an American accent, but he seems to forget sometimes. His effort is much weaker than Eva Pflug’s amazing performance as an American in The Council of the Gods.

Stylistically, The Condemned Village could be called (and has been) a socialist realist Heimatfilm. It has elements of the socialist realism we see so often in post-War Soviet films, combined with scenes that look like they came right out of one of Leni Riefenstahl’s pre-War Bergfilme. The best scene in the film occurs when the police spray the protesters with water. The scene feels absolutely real and sticks out in an otherwise romanticized film. 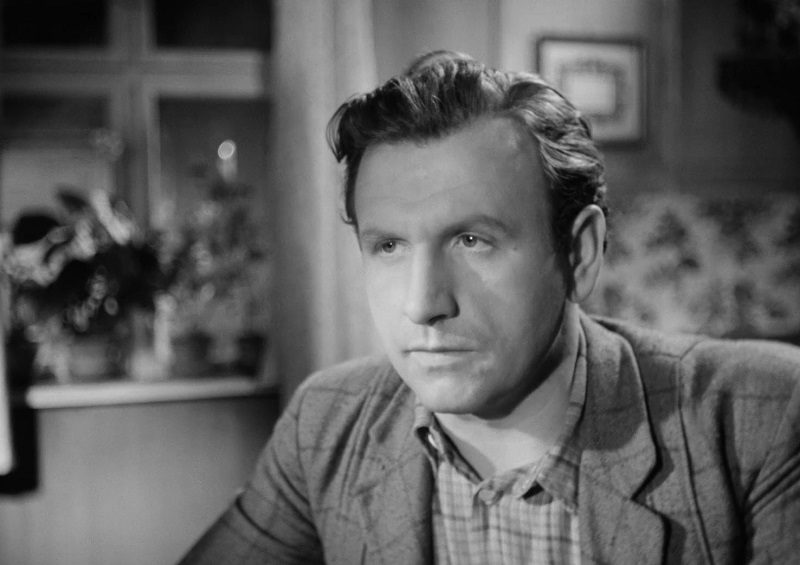 It’s clear that this film was made exclusively for a German audience, perhaps to its detriment. When the villagers—dressed very much as they would have dressed one hundred years earlier—rally in front of the government building there is a whiff of pitchforks and torches about it. When one woman, her face contorted with hatred, shouts “Germany for Germans!” (Deutschland ist Deutsch!), it has the same venom as when Hitler said it. I don’t think Hellberg or the Sterns intended it that way, and that’s not how it was perceived by German audiences. By 1952, Germans were tired of the Americans dictating the terms of their lives. I suspect the audiences reacted to the line and this film with a hearty “right on.” The film was a huge hit in both halves of Germany, much to the dismay of the American Military authority.

It’s interesting to compare The Condemned Village with Samuel Fuller’s Verboten! which reflects the American attitude towards Germans and German indignation at the end of the War. Frankly, we didn’t care if the Germans were upset over anything our military did in their homeland; they were Germans and German = Nazi. They couldn’t be trusted. End of discussion. This is best exemplified by Your Job in Germany, a short film shown to troops in Europe after the War to make sure they never saw Germans as anything other than monsters.

So is the film propaganda? Yes, but 1952 was a banner year for propaganda. In terms of output, there were far more anti-communists films made that year than anti-American films. We just didn’t call them propaganda films. We called them entertainment.

1. There’s no room here to get into the perception of the word propaganda, which was seen as a good thing in the early part of the twentieth century but eventually became the pejorative term it is today.

2. My attempts to corroborate this turned up nothing. The only similar event I could find was a failed attempt by Patton to free the prisoners at a P.O.W. camp near Hammelburg. That camp, Stalag XIII-C, became the basis of Stalag 13 on the popular sixties television sit-com Hogan’s Heroes.