In the years after World War II, there was a lot of soul-searching in East German films. At first, this took the form of the Rubble Films, which used the destruction of Germany as a metaphor for the German soul—blown to pieces and ready for reconstruction. Rubble Films usually focused on a few people and took place over relatively short spans of time. At a certain point, the films moved away from this introspection, and started to look at the bigger picture in an attempt to answer the question: How did we get to this point? Films such as Rotation, The Kaiser’s Lackey, and The Council of the Gods take a broader perspective on German history, involve several people and groups, and cover many years. Girls in Gingham (Die Buntkarierten) is one of these films.1 It starts during the Wilhelmina period at the end of the nineteenth century, and ends right after World War II. It is based on a radio play by Berta Waterstradt, and its intro keeps the radio practice of introducing the characters by name along with the names of the actors playing them.

The story follows Guste, the illegitimate daughter of a maid who dies in childbirth. Guste is a headstrong young girl who has no intention of following in her mother’s footsteps, but history is stronger than will. Guste grows up, becomes a maid herself, marries, has two children, and suffers through two world wars. Along the way, observations are made on the inherently evil nature of a society where 1% of the population controls nearly all the wealth, and the way corporations use wars as an excuse to make money. 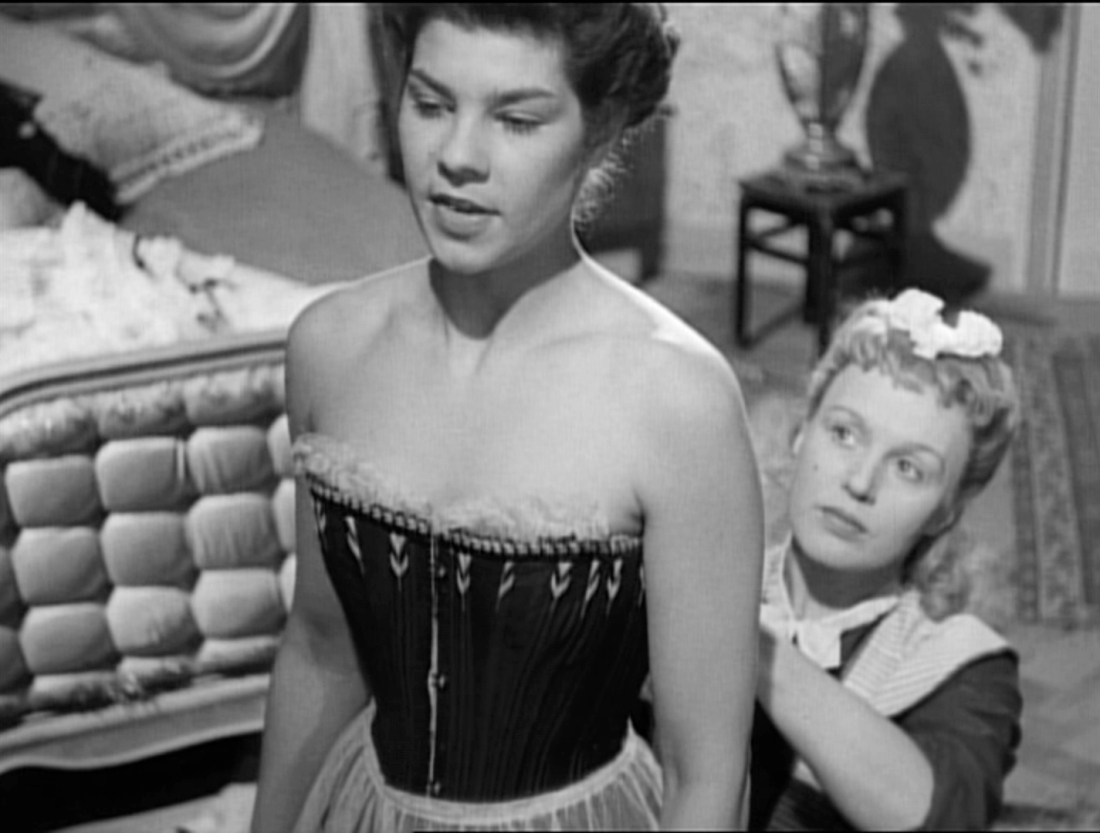 Girls in Gingham was the second feature film directed by Kurt Maetzig, one of the most well-respected directors in East Germany, and no stranger to this blog. He directed such classic DEFA films as The Council of the Gods, The Silent Star, and the banned masterpiece, The Rabbit is Me. Mr. Maetzig, along with Gerhard Lamprecht , Peter Pewas, Wolfgang Staudte and others, was one of the filmmakers who helped found DEFA.

Reportedly, Mr. Maetzig’s decision to make Girls in Gingham was based on Bertholt Brecht’s criticism of Maetzig’s first film, Marriage in the Shadows. Never mind that it remains one of the most successful movies DEFA ever released, Brecht found the film kitschy. Girls in Gingham was Mr. Maetzig’s attempt to make a film more in line with Brecht’s aesthetics. One can see hints of Mother Courage in Guste’s character, but Mr. Maetzig has more faith in personal heroism than the cynical Brecht, which is probably why he was tapped to make the Ernst Thälmann films.

In 1976, Mr. Maetzig retired from filmmaking, but maintained a lively presence in the film community and was always there to offer advice younger filmmakers and impart his extensive knowledge of the history of DEFA. He died in 2012 at the age of 101 and is buried in the Dorotheenstädtischen Cemetery in Berlin.

Guste is played by Camilla Spira in a tour de force role that sees her go from a bright-eyed young woman to a war-weary old lady. Acting was in the blood for Ms. Spira. Both her parents, Fritz and Lotte, were successful actors on stage and screen, so it seemed natural for her to follow in their footsteps. She got her start in silent films during the Weimar Republic, only to see her career cut short by the Nazis. Unfortunately, the fact that her father was Jewish got in the way. Fritz and Camilla were send off to concentration camps, where Fritz Spira died in 1943. Camilla’s mother, who was not Jewish, divorced Fritz in 1934 under pressure from the Nazis. This allowed her to continued to acting in films, but after 29 years of marriage, the cost was too high. She died shortly after hearing about her ex-husband’s death.

Girls in Gingham was Camilla Spira’s first feature film appearance after the war, and she won the East German National Prize for her performance. She appeared in a few more DEFA films, but started working in West Germany in the early fifties. Among the West German films she appeared in were: Des Teufels General (The Devil’s General), Emil und die Detektive, and Rosen für den Staatsanwalt (Roses for the Prosecutor)—one of the few West German films to address the issue of lingering Nazism in West Germany, albeit in a comedic fashion. Her sister, Steffie Spira, stayed in East Germany and continued to appear in films until after the Wende. Camilla Spira died in 1997.

Considering how important it is to this film, it is remarkable that no credit is given for the make-up artist. Most DEFA movies at the time listed this information. Given the film’s production year, it is possible that the make-up artist was one of the technicians that went to West Germany to work. West Germany had just declared itself an independent state and was starting to wriggle out from under the anti-film-production policies of the United States Millitary authority (OMGUS). Directors, actors, and cinematographers who had previously been able to find work only in East Germany were now getting jobs in the BRD. In a year or two, the GDR would officially take a stand against this and stop using West German technicians, but this was a bit like closing the barn door after the horse has run off. A technician that made it public ally known that they were switching to western productions might well have found their name stricken from the credits on a DEFA film. If that is the case, my money would be on Jette Arlt, who did the make-up for Maetzig’s Marriage in the Shadows, but started working in the west in 1950. This is pure speculation, however. Whoever it was, they did a remarkable job of aging Camilla Spira and Werner Hinz and deserve more credit (and if anyone had more information on this mystery, please let me know in the comments).

Girls in Gingham was a hit both in East and West Germany and is one of the all-time, top-selling DEFA films. It’s anti-capitalist sentiments might have rankled the authorities in West Germany, but it still resonated with those who lived though the war. More importantly, it didn’t blame the people for Hitler’s actions, placing most of the blame, instead, on the Krupp family, which built a 400-year dynasty by providing armaments for all the major wars in Europe. This is a theme we’ve seen often in East German films from this period, where the primary blame for WWII is placed at the feet of corporations such as Standard Oil, Krupp, and IG Farben (see also, Council of the Gods).

1. Due to an error made somewhere along the line in translation, you will often see this film listed under the title The Beaverskin. This weird error probably got it’s start with the English subtitles on the German DVD. There is a DEFA film titled The Beaverskin (in German: Der Biberpelz) that came out the same year as Girls in Gingham, and perhaps that has something to to do with the error. This mistake is so prevalent that even Wikipedia repeated it (although hopefully by the time you read this, I, or someone else, will have fixed that). Such is the power of the Internet.