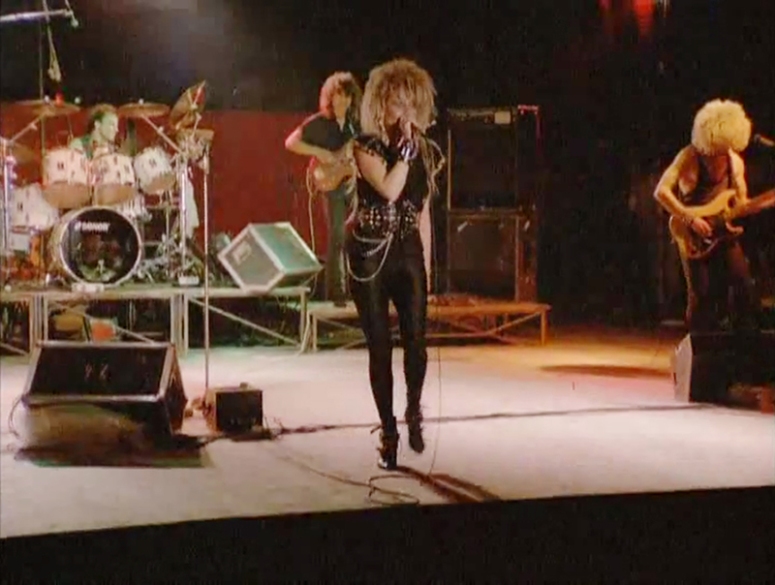 For anyone whose preconceptions about life in East Germany is informed by what was taught in American schools, whisper & SHOUT (flüstern & SCHREIEN) is the film to see. Made in 1988, it follows the exploits of several East German rock bands as they travel from venue to venue. In between, the film stops to interview the locals about their attitudes toward, life, the universe, and everything. Given East Germany’s reputation for being repressive, it is interesting to see how freely the people in the film discuss their lives, their jobs and their opinions. We do catch occasional glimpses of people pausing to assess whether or not they should be talking about these things, but they carry on blithely anyway. These are mostly young people, so this might simply be the East German equivalent of college students posting videos of their Cabo vacations on Facebook. Youth knows no discretion—one of the advantages of an underdeveloped prefrontal cortex.

The film covers a broad range of styles from Punk to Glam, to No Wave. Some of the bands are good and some of the bands are dreadful. The best of the lot is Feeling B, whose post-punk style is raucous fun. This isn’t too surprising considering two of the band’s members, Paul Landers and Christian “Flake” Lorenz, are also in Rammstein—one of the best heavy metal bands to come out of Germany. Feeling B’s appearance in the film came about almost by accident. The camera crew intended to film a rock concert scheduled to occur in conjunction with an annual bathtub regatta in Schwerin. They were there to film another band, but when the authorities cancelled the event, only Feeling B was already there, so they set up and played anyway, much to the delight of the kids on the beach.

On the opposite end of the spectrum is Chicorée, a band that manages to represent all of the worst aspects of eighties pop. Imagine Kajagoogoo as a Pablo Cruise cover band and you’ll get some idea of what it’s like to watch Chicorée. The band’s leader Dirk Zöllner thinks highly of his skill as a composer and singer, and travels through the film with a cheery lack of self-awareness. At the beginning of the film, we see the band performing at large venues. A few interviews suggest that the band had its fans. As the film progresses, you can see the band members become more and more tired of Zöllner’s ego, so that, by the end of the film, he is singing on stage in a rec hall, with only a recorded backing track and keyboard player André Gensicke while a few bored teenagers look on. No longer Chicorée, Zöllner’s new, two-man band is simply dubbed “Die Zöllner.” It’s both funny and sad, but the situation doesn’t seem to affect Zöllner much. He seems unfazed, swearing that “last night’s audience” was better. It reminds me of nothing so much as This is Spinal Tap. Amazingly, Zöllner is still going, and still performing with Gensicke. No longer the vapid pretty boy his was as a youth, he looks like a well-dressed homeless person, which is an improvement. His singing has matured, giving it more resonance than it had in 1988, and he’s working with a better lyricist (more on this later), but his music stays close to its Yacht Rock roots. 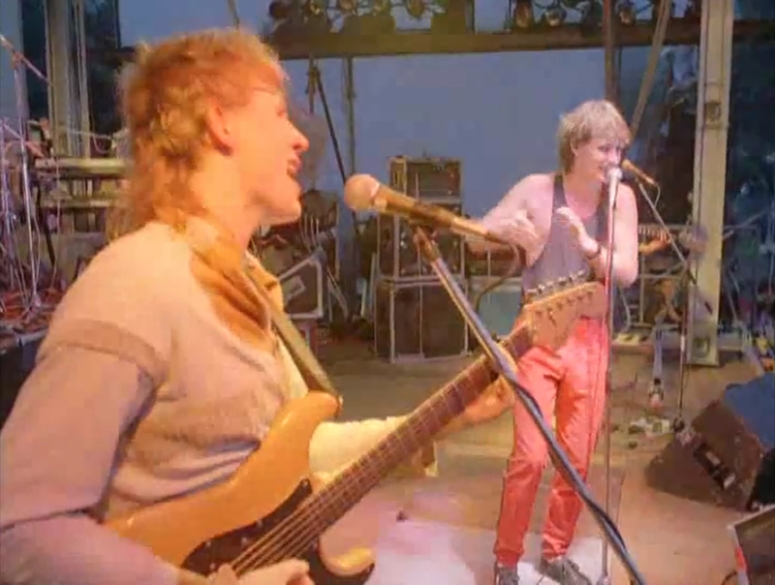 Between these two extremes is a band called Silly—one of the most popular bands in the GDR. Silly was fronted by Tamara Danz, who looked like Lita Ford and sang like no one else. In appearance, you might be tempted to call the band an East German version of the California new wave band Berlin, but Danz is a gutsier singer than Terry Nunn. Danz’s charisma is palpable and it’s easy to see why the band was popular. Silly is shown in performance a few times, as well as in backstage interviews with the band. Silly continued to have its followers after the Wall came down. While working on the album Paradies, which was recorded in their own studio, Tamara Danz was diagnosed with breast cancer. She died on July 22, 1996 shortly after the album came out. She was 43 years old. The band then went on a ten year hiatus before reforming with guest member Anna Loos as the lead singer.

Until Tamara Danz’s death, most of the lyrics for Silly songs were written by a man named Werner Karma. Although Karma wrote lyrics for other bands, he was best known as Silly’s lyricist, and for penning the phrase that would be forever associated with Silly and the ultimate statement on the fall of the Wall: “Alles wird besser, aber nichts wird gut” (“Everything will be better, but nothing will be good”). After the band reformed with Anna Loos in the top spot, Karma contributed the lyrics to one more album. The album was hit, but Loos decided she would rather sing her own compositions instead. By the third album, Wutfänger (Ragecathcer), most of the songs were written by Loos. The album did very well, but fans of Karma weren’t happy. One of these fans was our old friend Dirk Zöllner. Zöllner says he was so disgusted with Wutfänger that he threw the CD out his car window. Zöllner met up with Karma and discovered that the lyricist had already written an album’s worth of songs that Loos had rejected. Zöllner had a brainstorm and started a crowd-funded campaign to make an album of these songs. The campaign raised the money in no time, and Dirk und das Glück: Zöllner trifft Karma (Dirk and Good Fortune: Zöllner meets Karma) was the result. This album also did well and help revitalize Zöllner’s ever-flagging career. Say what you will about Zöllner, the man knows how to bounce back. Dirk und das Glück also gives Zöllner’s longtime keyboard player André Gensicke a chance to sing lead.

The film spends as much time interviewing the fans as it does focusing on the bands. Coming out as it did in the late eighties, there are a lot of unfortunate outfits and hairstyles in evidence. If you held a drinking game where you had a drink every time you saw a mullet, you’d pass out before the film was over. Some of the fans look like escapees from Human League, while others, especially the fans of Silly adopt the look of the band. We follow the daily routine of one of Silly’s fans as she hangs posters over her bed, prepares for a show, and argues with her stodgy father about the lion-with-a-perm hairstyle Tamara Danz and her young admirers share. The saddest moment in the film occurs when this young woman discusses her upcoming life change as she moves into the workplace. Aware that her days of following Silly’s every move are coming to an end, she speaks frankly about it, but there is a sadness in her voice. You can tell she feels like her life is over. 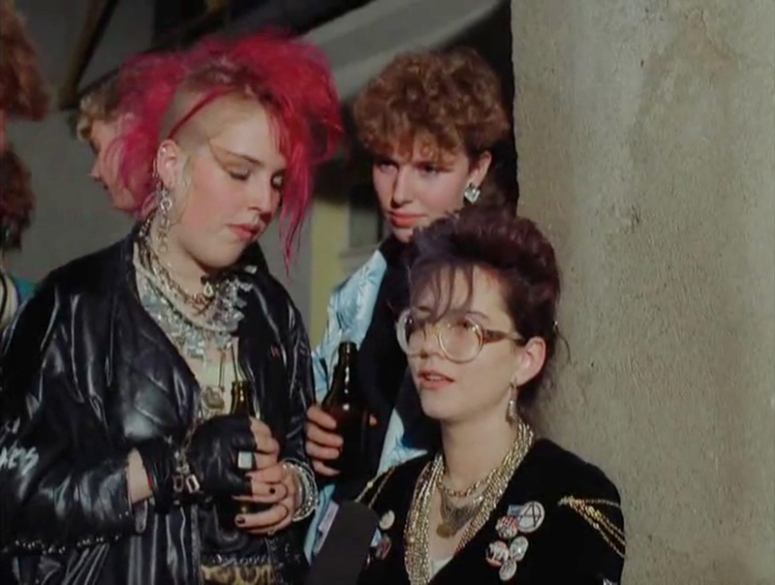 The most surprising thing to see is the appearance of skinheads, doing that same goofy bounce-kick hop they loved so much in the West, and slamming into each other with abandon. The politics of the skinheads in the film is never overtly stated. One interviewee suggests that many of the skinheads in the GDR were “redskins” (left-wing skinheads). When the skinheads are interviewed, they don’t talk politics, preferring instead to discuss the effectiveness of mosh pits for relieving aggression.

Other bands appear more briefly, including This Pop Generation and André + Die Firma, which features André Greiner-Pol. Greiner-Pol was the leader of Freygang—a notorious East German band that was banned at various times throughout the seventies and eighties due to André’s inflammatory lyrics. Also making an appearance are two members of Sandow, a post-punk band out of Cottbus. Sandow is best known for their song “Born in the GDR”—a take-off on Bruce Springsteen’s “Born in the USA.” Like Springsteen’s song, Sandow’s song was intended as criticism but was interpreted by many people as an anthem, much to the band’s dismay. For years, the band refused to play the song at concerts. Later, they added it back to their repertoire, but with modified lyrics to make its point more obvious. 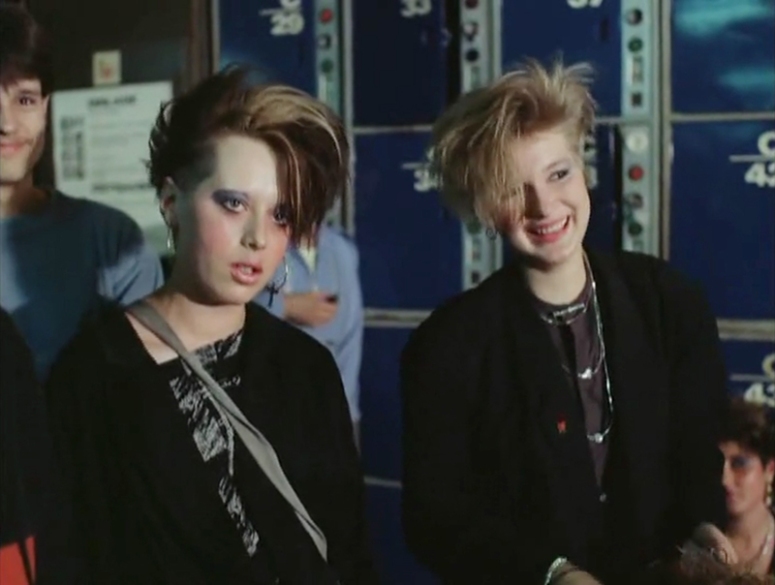 whisper & SHOUT was made in response to a report by the Zentralinstitut für Jugendforschung (Central Institute for Youth Research). The report found that adolescents between the ages of 14 and 18 listened to three to four hours of rock music daily. Perhaps worried about what this might mean, or simply curious, DEFA OKed the production of this documentary, which is subtitled “Ein Rockreport” (a rock report). The film was shot with handheld cameras by a mostly young crew of cinematographers. The one exception is Christian Lehmann, who was born in 1934. Lehmann had a long career in East Germany, filming dozens of documentaries and documentary shorts. The Wende appears to have had little effect on his career. He continues to film documentaries to this day.

In 1994, the German TV channel MDR broadcast flüstern & SCHREIEN 2, a semi-sequel that follows up with two of the bands from the first film, along with some interviews with their fans. In this documentary, we see Rammstein in its formation phase along with some later concerts by Feeling B. A third part was also filmed as an attempt to examine the East German bands that didn’t make it into the first film. These include Freygang, The Santa Clan, The Blind Passengers , and The Skeptics. Due to various disputes with the bands, this third part has gone through many changes over the years. Neither of these is available for distribution at this time.