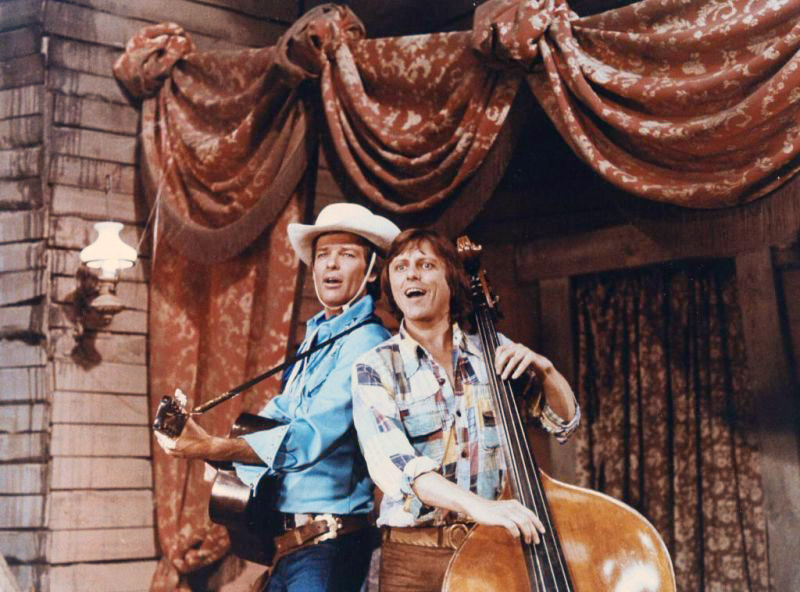 American pop singer Dean Reed’s popularity in East Germany cannot be underestimated. He was not called the “Red Elvis” for nothing. He played to packed houses throughout the Eastern Bloc nations, especially in Russia, where he was a huge star. Although he was born in Denver, Colorado, and under contract to Capitol Records, Reed’s big break came in South America, where his song “Our Summer Romance” was a hit in spite of its lack of airplay in the States. Reed started performing in South America exclusively, where he met and became close friends with Victor Jara, the Chilean singer and political activist who was tortured and killed by Pinochet’s goons after the U.S. orchestrated coup d’etat. Later, in East Germany, Reed would direct and star in a TV movie about his murdered friend, El Cantor.

When things got too hot in South America, Reed went to Europe, where he started appearing in films, primarily spaghetti westerns such as God Made Them… I Kill Them, Twenty Paces to Death, and Adios Sabato. In 1973, he starred in his first DEFA film, Aus dem Leben eines Taugenichts (The Life of a Ne’er-do-Well), but it was his next film for DEFA, Kit & Co., that brought him real attention. At that point, Reed decided to move to East Germany. 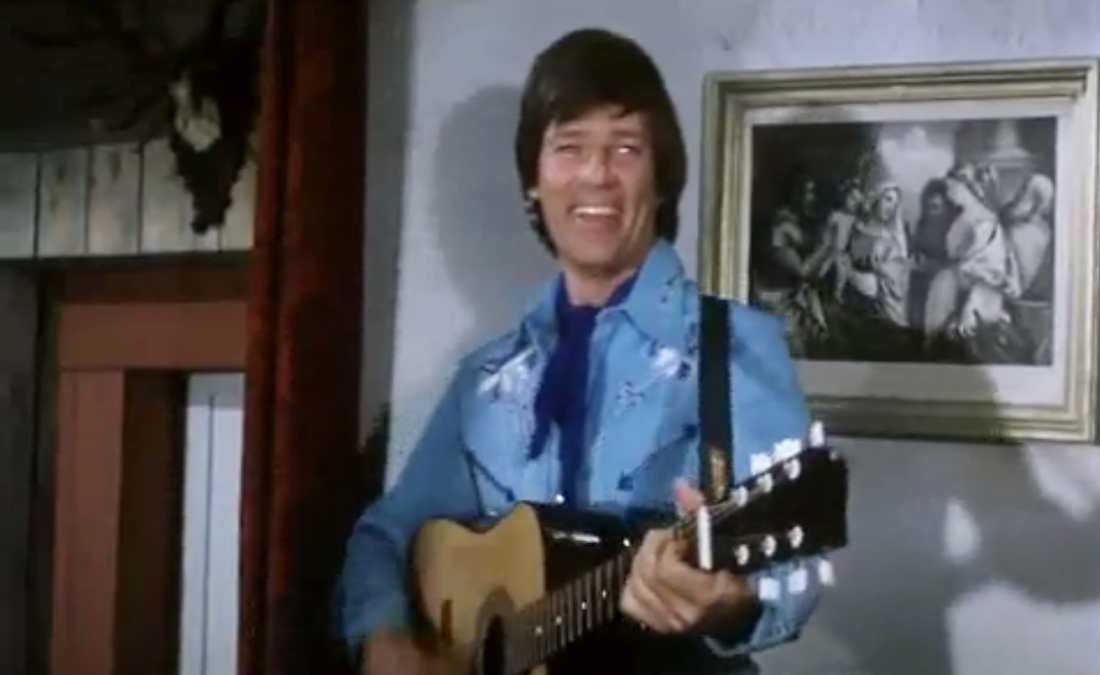 This was a public relations goldmine for the GDR; up there with Angela Davis’ visit to the country a year earlier. While the U.S. government continued to paint the communist countries as hellish places that no one would want to have anything to do with, here was an American pop star living in East Germany and loving it. As a consequence, Reed was given a great deal more creative freedom than any East German filmmaker was ever allowed. Nowhere is this more in evidence than in Sing, Cowboy, Sing, the western comedy that Reed starred in and directed.

Sing, Cowboy, Sing follows the adventures of Joe (Dean Reed) and his pal Beny as they travel across the American West, singing in saloons and performing in Wild West shows. It is a silly affair that would be a kids’ film if not for a few gags involving large breasts. There’s a shootout at the end, but nobody suffers anything worse than an injured hand. Occasionally the action stops so that Joe and Beny can perform a song. There’s some political content here but very little. The bad guy is, of course, a rich American, and the one town he doesn’t control is Liebenthal (literally, “Love Valley”), which was founded by Germans.

Sing, Cowboy, Sing is part of a fine old genre, the comedy western. It harks back to the silent era and includes such classics as Destry Rides Again, Along Came Jones, Cat Ballou, and Blazing Saddles; along with some very silly movies such as Ride ‘Em Cowboy, Cockeyed Cowboys of Calico County, and The Apple Dumpling Gang. Sing, Cowboy, Sing falls squarely in the latter category. It is a very light and silly movie, but with touches that show an influence from Reed’s work on spaghetti westerns. Stylistically, it is all over the map. One scene will feature sped up action for comic effect, and the next will be played for high drama with scene that looks like it was shot by Gianfranco Parolini.

The film uses an international cast, including Czechs, Romanians, and even Dean Reed’s old acting coach and TV director, Paton Price whom Reed had flown to East Germany to help him get through the production. As one might imagine, these actors were all dubbed by Germans. Reed himself was dubbed by Holger Mahlich, an actor often called on for dubbing on both sides of the wall (he left East Germany in 1982). He is often called upon to do the voices for Xander Berkeley and Ed Harris, but he has dubbed everyone from Harvel Keitel to John Candy. His is the voice of John Steed in the German release of The Avengers.

Beny is played by the Czech actor Václav Neckář, who is best known for his first feature film role—that of Milos in Jirí Menzel’s Oscar-winning classic, Closely Watched Trains. Like Reed, Neckář was a successful pop singer, with several hits in his native Czechoslovakia. Some of these songs were originals, while others were Czech cover versions of popular tunes such as “Mrs. Robinson,” “Suzanne,” and “Bungalow Bill.” Unlike Reed, Neckář started as an actor and came to singing later. He had several success singles in the sixties, then joined his brother Jan’s group Bacily (which translates to “The Germs”) in 1971.

In 2000, his named cropped up on a list of informants for the StB—Czechoslovakia’s version of the Stasi. This didn’t help his movie career any. Since the publication of that list, he’s only done one film as a voice in an animated movie, and a small part in the Czech TV show, Gympl. He continues to perform with Bacily, as several videos on YouTube can attest.

The lead female love interests of Maria and Susann were played by Violeta Andrei and Elke Martens (née Gierth), respectively. Violeta Andrei is best remembered as the voluptuous cosmonaut Rall who dances with the snake at the party in Gottfried Kolditz’s wild East German science fiction film In the Dust of the Stars, and as Gojko Mitić’s love interest in Severino. She is a Romanian and appeared in several movies in her home country, including The Moment (Clipa) and The Pale Light of Sorrow (Lumina palidă a durerii). She was married to Ștefan Andrei, foreign minister for Nicolae Ceauşescu. She occasionally still appears in Romanian TV shows, but hasn’t done a feature film since the overthrow of Ceauşescu.

Elke Martens, appearing in this film under her maiden name, Gierth, hails from Dresden. Like Reed and Neckář, she is a singer, although she gets no chance to demonstrate it in this movie. She mostly here for cleavage gags. During the seventies and eighties, she performed in the GDR with her band, Megaphone. Occasionally, the band ran afoul of the authorities for its provocative lyrics and faced a year-and-a-half ban in 1980 because of this. More recently, Martens has made a name for herself in Schlagermusik—easily the least provocative music known to man. Martens outed herself as an IM, claiming that she was forced to sign an agreement to provide the Stasi information lest she go to prison. Reed’s original screenplay for this movie was in English. According to one source, it was Martens who created the German script for the film.

The music for the film is by Karel Svoboda, a Czech composer best known for his work on children’s films. Svoboda started out studying to be a dentist, but his love was always music. In 1963, with the burgeoning popularity of bands such as The Beatles and The Rolling Stones, he started the group, Mephisto, who later became the house band for the Rococo Theater (Divadlo Rokoko) in Prague. While the songs in Sing, Cowboy, Sing are adequate but forgettable, the score features some excellent set pieces that a clever director will some day repurpose. Along with his scores for several movies, Svoboda also wrote musicals based on popular fiction, including, Dracula, Monte Cristo, and Golem. In 2007, Svoboda committed suicide in the garden of his home in Jevany.

Critics were unkind to Sing, Cowboy, Sing. Renate Holland-Moritz, the resident film critic for East Germany’s humor magazine Eulenspiegel, found Reed’s directing unfocused and felt he was unable to tell the difference between what’s funny and what’s merely absurd, and West Germany’s Cinema magazine called the film amateurish slapstick. As is often the case with intentionally silly films, the general public found the movie more entertaining than the critics did. The film was a hit. As inane as much of the humor is, Reed’s ingratiating personality and his obvious cowboy credentials carry the movie. This would be Dean Reed’s last film for DEFA before his death.