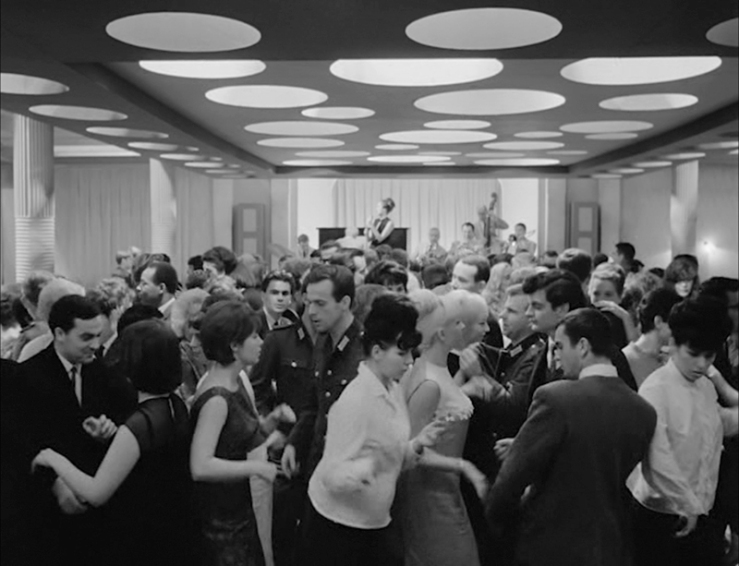 In the mid-fifties, director Gerhard Klein and screenwriter Wolfgang Kohlhaase made a trio of films about life in Berlin. The films were inventive, daring, and popular. Both men went on to have successful careers at DEFA, working together and separately to create films of all sorts. In 1965, the two joined forces again with the what was to be the fourth film in their Berlin series, Berlin Around the Corner (Berlin um die Ecke). In fact, it was initially slated to be called Berlin: Chapter IV. Unfortunately, this was the same year that the 11th Plenum occurred. By the time the film was finished in 1966, the 11th Plenum had started their “Kahlschlag” (literally, “clear cutting”), and the film was promptly rejected and shelved. The officials called it “dishonest,” which is an odd thing to say considering it’s one of the most honest films to ever come out of East Germany. They also called it “anti-socialist”—an even more absurd claim since the motivation of the main character is his desire to see equity achieved.

That main character is Olaf, an impetuous young fellow, who is always getting into trouble at the factory where he works. He’s usually accompanied by his buddy Horst, who is even more of a trouble maker than Olaf is. They sometimes break the rules and are not afraid to speak out against the status quo. For Olaf, this is due to his sense of fairness. For Horst, on the other hand, it is mostly just rebellion for its own sake. Not surprisingly, Horst spent some time in West Germany. Though not implicitly stated, there is some suggestion that much of Horst’s bad behavior is a result of having lived in the West.

Olaf and Horst go and listen to Karin, a singer at a local dance hall. Olaf had met her the night before when she borrowed his coat after jumping off a boat and swimming to the shore where he sat. When she’s not singing, Karin works in the kitchen, and in her spare time, does film and photo shoots. Olaf falls in love with her, but Karin’s in the middle of an ugly divorce and isn’t in any hurry to get into another bad relationship. From where she stands, Olaf looks like nothing but trouble. 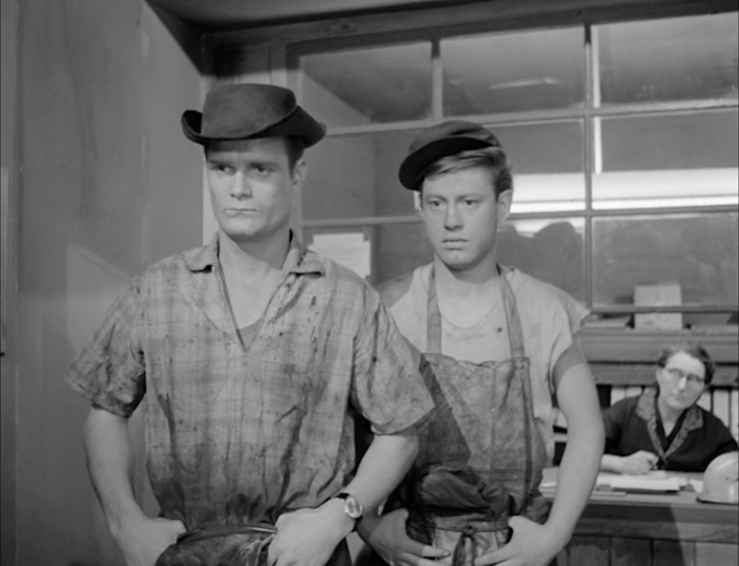 The young men’s main antagonist is Hütte, who publishes the factory’s newsletter. Hütte is an old-school communist who thinks the young people of East Germany are a bunch of privileged brats with no respect or appreciation for what people like him went through during the war. The person Olaf is closest to at the factory is Paul Krautmann, the old mechanic who has to keep the machinery running, and is always complaining that he isn’t being given the proper parts to do so. Olaf would like Paul to be an ally, but Paul’s attitude is that one must do their work as best he can and keep his head down. Things escalate after Olaf and Horst are criticized in the factory newsletter by an action of theirs that was meant to show the problem of pay inequality at the factory.

Criticizing the shortcomings of the system was always tricky, both before and years after the Plenum. Like Jadup and Boel, the criticism here is aimed at showing the weaknesses in the system in hopes of making it stronger, but the authorities had a great deal of difficulty with that concept. As far as they were concerned, the system was already perfect and any criticism was nothing less than subversion. With the banning of Berlin Around the Corner, the state created a precedent for their approach to all future attempts at constructive criticism. A precedent that set in motion the state’s eventual downfall.

Neither director Gerhard Klein nor screenwriter Wolfgang Kohlhaase should need any introduction on this blog by now. Besides the popular Berlin films of the fifties (Alarm at the Circus, A Berlin Romance, and Berlin – Schönhauser Corner). They also gave us The Gleiwitz Case, one of the grimmest movies ever made. They probably would have gone on to make many more great films, but Klein died while filming Murder Case Zernik, which would have been Klein’s fifth film to explore life and events in Berlin. After that, Kohlhaase continued to work on screenplays for Konrad Wolf, including I Was Nineteen, The Naked Man on the Sports Field, and Solo Sunny. Since the Wende, he has continued writing screenplays, most notably The Legend of Rita (Die Stille nach dem Schuß) for Volker Schlöndorff, and Summer in Berlin (Sommer vorm Balkon) for Andreas Dresen, a film that hearkens back to his work for DEFA in its tone and subject matter. 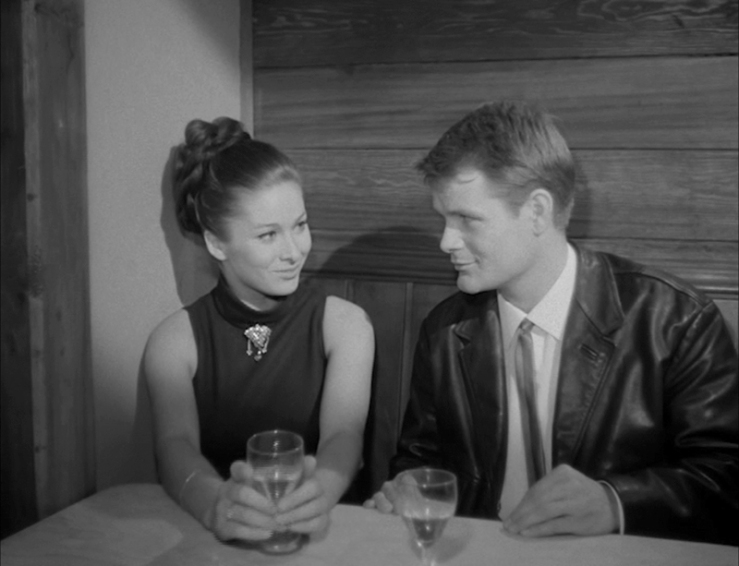 Playing Olaf is Dieter Mann in his first feature film. Square-jawed and rugged-looking, Mann keeps his character balanced between short-fused reactions and sympathetic understanding. It is a nifty portrait of a young man poised on the edge of true adulthood and Mann pulls it off nicely. Like many other East German actors, he got his start on stage. From 1964 until 2006, he was a corp member of the ensemble at the Deutsches Theater in Berlin. Berlin Around the Corner was Mann’s first feature film. He went on to have a long and prolific career in East Germany, primarily in supporting roles. After the Wende, Mann suffered usual snub of East German talent, but he was too good an actor to ignore for long. Having worked extensively in television already in East Germany, and used to playing smaller roles, he was soon working again. He is best known to Western audiences for his portrayal of Feldmarschall Wilhelm Keitel in Oliver Hirschbiegel and Bernd Eichinger’s Downfall (Der Untergang).

Horst is played by Kaspar Eichel, another fine actor who got his start on the stage. His first feature film was the lead in The Golden Goose. This was followed by his role in The Adventures of Werner Holt as the ill-fated Fritz Zemtzki. Throughout his career Eichel has divided his time between stage and screen. Until recently he was a regular member of the Kriminal Theater in Berlin. In 2015, he appeared in the documentary Erich Mielke – Meister der Angst (Erich Mielke – Master of Fear) portraying the much-hated head of the Stasi, Erich Mielke. He has also done a lot of dubbing for German releases, providing voices for everyone from Robert Redford to Sid Haig.

Karin is played by Monika Gabriel. It was Monika Gabriel’s second feature film. Her first, The Robe (Das Kleid), was also banned. The East German public finally got to see her in a feature film in 1967, with The Lord Of Alexanderplatz (Ein Lord am Alexanderplatz). In 1971 Gabriel married the West German actor Wolfgang Kieling, whom she met back in 1969 while working on The Seventh Year (Das siebente Jahr). At that point, Gabriel had already been married twice, first to Polish-born actor Stefan Lisewski, and then to Armin Mueller-Stahl. When Kieling returned to the West, Gabriel obtained an exit visa followed him. She appeared in several West German television productions from 1972 until 1985, but thereafter retired from screen appearances although she continued to work as a voice talent for the German dubs of foreign films. In 1992, she married director Wilfried Dotzel, but he died a year later. She never remarried again and died of cancer in 2007. 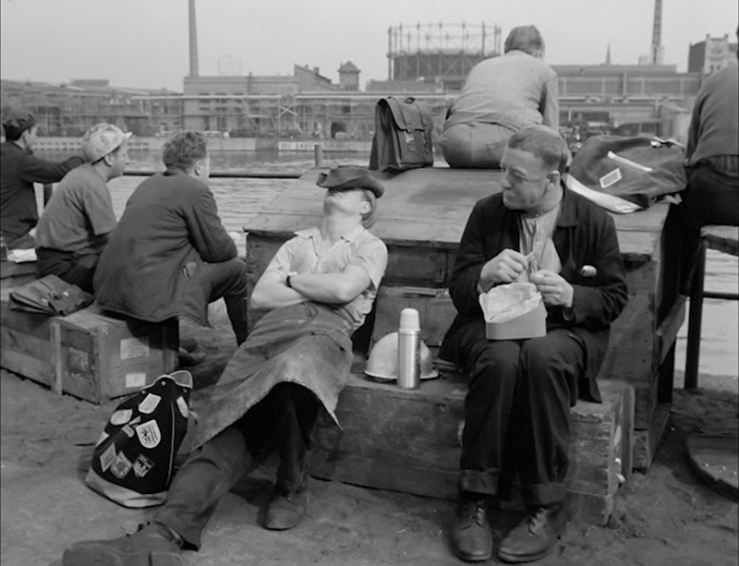 Playing Paul Krautmann, Erwin Geschonneck is, as always, sensational. Every gesture and expression expertly conveys the character. Anyone interested in acting would do well to watch Geschonneck here. This actor should need no introduction here by this time, having starred in several of the East Germans films ever made, including The Axe of Wandsbek, Castles and Cottages, Carbide and Sorrel, Anton the Magician, and many more. After the Wende, Geschonneck was afforded very few opportunities to demonstrate his talent. The reunification led to a lot of great East German actors—especially the older ones—being essentially kicked to the curb, but the saddest example of this is how little the new Germany took advantage of this man’s talent. He died March 12, 2008 at the ripe old age of 101 (for more on Erwin Geschonneck, see Carbide and Sorrel).

The cranky newsletter editor Hütte is played by Hans Hardt-Hardtloff, an actor who started performing on stage when he was sixteen. Hardt-Hardtloff worked exclusively on stage, usually outside of Germany during the Hitler years. After the war, he was hired as the senior director for Mitteldeutschen Rundfunk (Central German Broadcasting, MDR) in Leipzig. In 1957, he started appearing in films and on television. Most notoriously, he was hired to duplicate the role played by Raimund Schelcher in Castles and Cottages. Schelcher had a serious drinking problem, and there was some real concern that the man wouldn’t be able to finish the movie without falling off the wagon. So Maetzig hired Hardt-Hardtloff to perform each scene a second time. That way, if Schelcher didn’t make it all the way through the shoot, the film would still be salvageable. Maetzig didn’t really plan on using the footage, it was mostly used to remind Schelcher he was replaceable and to keep him on the straight and narrow (it did). The incident was used by Andreas Dressen for the plot of his 2009 film Whiskey with Vodka (Whisky mit Wodka). Coming, as he did, so late in his career to films, he was usually called on to play supporting roles as either government officials or professors, both benign and malicious. Hardt-Hardtloff died in 1974 in Potsdam.

The film’s jazzy pop score was by Georg Katzer, a composer better known for his experimental electronic music. When not composing music for films Katzer’s work is more Morton Subotnick than Henry Mancini, but he was a talented enough composer to come up with effective film scores when called upon to do so. He composed solid scores for several films during the sixties, and then again in the last days of the DDR, but he mainly worked in the electronic music field, founding the Studio for Electroacoustic Music at the Academy of Arts in Berlin in 1982. Katzer continues to composes electronic music, but his film score composition ended with the GDR.

Like most of the films banned during the 11th Plenum, Berlin Around the Corner didn’t get an official release until after the wall came down, although it did receive a limited screening in 1987. It officially premiered in 1990 to positive reviews.

4 thoughts on “Berlin Around the Corner”