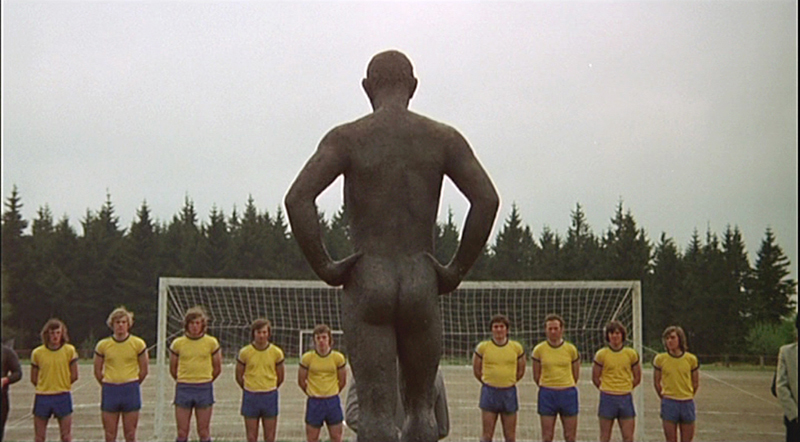 Konrad Wolf’s three feature films—Goya, The Naked Man on the Sports Field (Der nackte Mann auf dem Sportplatz), and Solo Sunny—form a loose trilogy. On the face of things, the three films are as different as can be, musically, stylistically and cinematically, but all three films deal with deal with artistic creativity, in each case seen from a different perspective. On one end of the spectrum, we have Goya, the story of a true creative genius who changed art forever, on the other end of the spectrum we have Solo Sunny, the story of a young lounge singer who is just talented enough scrape by, but not much more. In between, is The Naked Man on the Sports Field, the story of a talented artist whose work is very good, but who cannot find acceptance with the general public. He will never be as famous as Goya, but neither will he be forgotten like Sunny. The thing all three main characters have in common is a strong creative urge. Goya paints in spite the threat of the Spanish Inquisition; Sunny tries to perfect a hit single in spite of never playing anywhere with more than fifty people in the audience, and Herbert Kemmel, the sculptor in The Naked Man on the Sports Field, continues to follow his own visions in the face of civic criticism.

Being an East German film, this last issue is the most important. Since artistic abilities and the creative impulse are unique to an individual, what is its place in socialist society? Should this one man be allowed to follow his own muse, or should the will of the collective prevail? It also addresses what happens when the public is no longer able to discern good art from bad, relying instead on fixed categories of what they think art is supposed to be instead of nuanced intellectual examination. With Goya, Wolf placed the action in Spain in the late 1700s. The film’s hidden subtext was about East Germany, but Ulbricht was still in charge when Wolf started working on the film. Honecker, as of yet taken over the leadership, when he declared that “as long as one proceeds from the firm position of socialism,” there should be “no taboos in the fields of art and literature.”

The naked man in the title refers to a piece Kemmel is commissioned to sculpt for the local athletic field. Expecting a clothed soccer player, the local authorities are horrified to to see a life-size bronze of a naked man instead. Should the authorities accept this single artist’s vision, or should the will of the collective prevail? In this case, Wolf, a lifelong communist seems to suggest that in an ideal socialist society there is room for both. Throughout the film Kemmel discusses art with various people and finds their perspectives on the subject severely limited. Most of the film concerns the relationship between Kemmel and his model Hannes. Hannes is just an ordinary guy, a member of a local construction brigade who has agreed to pose for Kemmel. The two men are as different as chalk and cheese, but they eventually learn to understand each other’s perspectives. 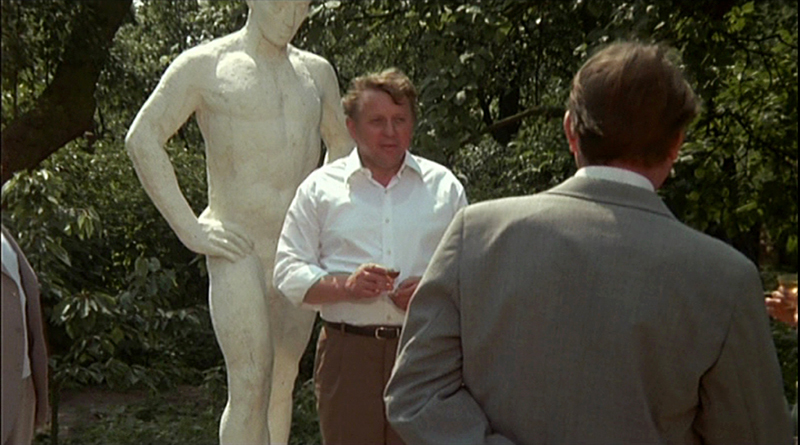 Konrad Wolf was one of East Germany’s most creative directors, but he is also a stylistic gadfly. Take any three Wolf films, and you’d be hard pressed to see that they were all made by the same person. The screenplay is by Wolfgang Kohlhaase, East Germany’s best scriptwriter. As always, Kohlhaase is concerned with the way people communicate. Usually this takes the form of people from different regions trying to communicate (Germans and Russians, Berliners and everybody else), but here it is about the limitations of communication between people of different walks of life.

Herbert Kemmel is played by Kurt Böwe, who brings a certain charm to every role. He is often called on to play police and government officials because of this. Here, he is slightly outside of the mainstream, but not dangerously so. Hannes is played by Martin Trettau, who worked primarily on television. Trettau first appeared on film in Konrad Wolf’s I Was Nineteen. He appeared in several feature films after that, but most of work, especially in the eighties, was for Deutscher Fernsehfunk (DFF), the GDR’s television company. Like many East German actors, Trettau found work after the Wende became more scarce, but did a few television shows before retiring. He died in 2007 in Berlin.

Various artists and sculptors were hired to create the artwork shown in the film. The naked man sculpture of the title was created by renowned East German sculptor Werner Stötzer, who also makes a cameo appearance as the town’s mayor. Works by fellow artists Will Lammert and Albert Ebert also appear in the film. 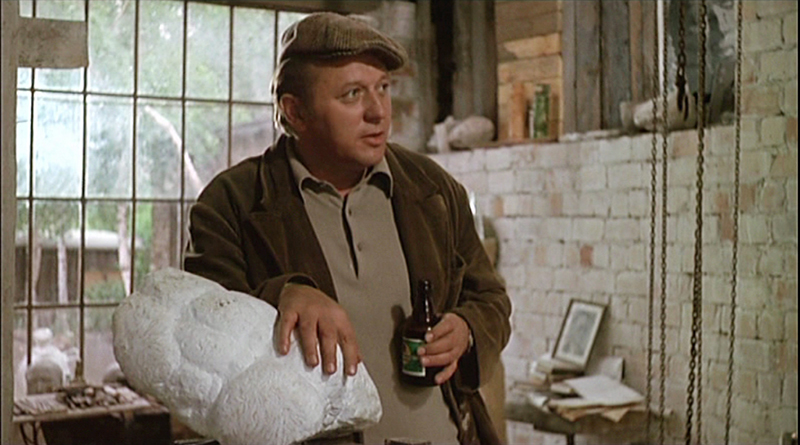 The film features a remarkably minimal score consisting of guitar and a pan flute. The score was by Karl-Ernst Sasse—East Germany’s number one composer. Sasse’s scores were often quirky, using percussion in interesting ways in combination with unusual instruments. Sasse could create an orchestral piece with the best of them, but he was no one-trick pony. If he or the director thought a film score required only one or two instruments, he could do that as well. Considering his versatility, one might assume that Wolf and he worked together quite often, but this was the only film on which they collaborated (Wolf was famous for using the same crew on most of his films prior to Solo Sunny, but this never applied to the composers; he rarely used the same composer twice). After the Wende, Sasse continued to compose for films right up until the turn of the century, when he retired. His last film score was for Rosa von Praunheim’s 1999 film The Einstein of Sex. The story of the renowned and infamous sexologist Magnus Hirschfeld. Sasse died in 2006, not far from the Potsdam-Babelsberg studios where he did most of his work.

The Naked Man on the Sports Field is a languid film. Too talky and low-key for the average American film watcher. But when viewed in conjunction with Goya and Solo Sunny, it completes a concept that addresses Wolf’s feelings about the relationship between creativity and society. After Solo Sunny, Wolf would explore artistic creativity one more time in the television documentary Busch singt (Busch Sings), but here he was working with several other directors and he died before the film was finished.