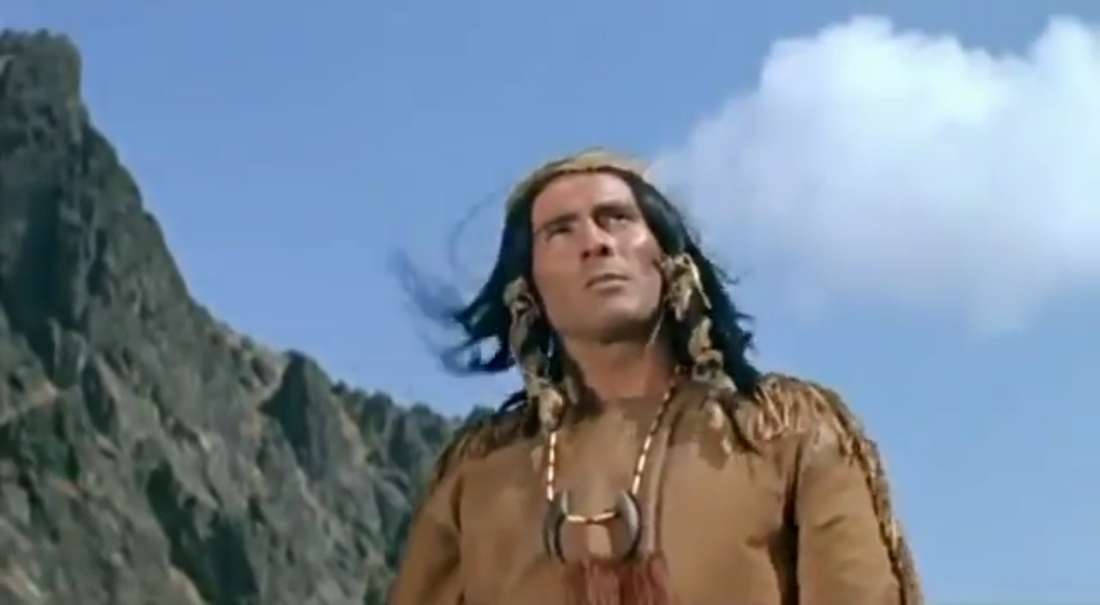 As discussed in previous articles here, the Western genre, so popular in America, afforded an excellent opportunity for the folks at DEFA to explore the dangers of capitalism without having to shoehorn its politics into an ill-fitting boot. If you ever wanted to see the evils of capitalism at work, you need look no further than the American West, where thousands of people were slaughtered and treated as second-class citizens in the name of “manifest destiny.” Maybe East Germany didn’t have access to many actual Indians, but Hollywood did and that didn’t stop them from hiring the likes of Sal Mineo and Jeff Chandler to play Native Americans. East Germany’s favorite Indian, Gojko Mitić, might have been Serbian, but Hollywood’s favorite, Iron Eyes Cody, was born in Louisiana to Sicilian parents.

White Wolves (Weiße Wölfe) was the fourth DEFA Indianerfilm. It was a sequel to The Falcon’s Trail, and featured many of the same cast members including Holger Mahlich playing the upstanding Pat Patterson, Barbara Brylska as Catherine Emerson, Pat’s love interest, Helmut Schreiber as the Indian-friendly merchant Sam Blake, Fred Delmare as Sam’s pal, Rolf Hoppe as the evil James Bashan, and, of course, Gojko Mitić as the Indian leader Farsighted Falcon.

The story picks up a three years after The Falcon’s Trail, and chronicles an actual event: The massacre of Indians at Fort Robinson on January 22, 1879. The Indians have been driven from their land, and shipped off to a reservation in Oklahoma in 1877. Then in 1878, Little Wolf and 200 other Indians escaped the reservation in a bid to return to Montana. Some of them were captured, and the results were catastrophic. When they attempted to escape, the soldiers opened fire, killing men, women, and children indiscriminately.

The event was also featured in John Ford’s Cheyenne Autumn. It is interesting to look at these films and compare how differently they approach the event. In White Wolves the Indians are simply victims, trying to escape the fort rather than get shipped back to Oklahoma. In Cheyenne Autumn, Ford, who had a long history of slandering the Indians, chooses to focus more on the things the Indians did to spark the event. He doesn’t exactly condone what happened, but he tries to understand it, in much the same way conservatives tried to understand why American police officers so often shoot unarmed black men.

When reports reached the East Coast that the Indians had been denied food while imprisoned at Fort Robinson and placed in buildings without heat in fifteen below temperatures, the public attitude toward the treatment of the Indians began to change. Editorials questioned the actions of the troops, and a congressional committee was created to investigate the matter. Eventually the escaping Indians were allowed to stay on their home turf—as close to a happy ending as the Indians could hope for during this era.

White Wolves starts with Farsighted Falcon and a few friends trying to find a place to live, after evading the troops trying to ship them off to Oklahoma. After Falcon’s wife is killed by Bashaan, Falcon goes on the warpath. As in The Falcon’s Trail, the bad guys are the agents of a mining corporation that uses its power and finesse to stack the local authorities against true justice. The attack on American-style capitalism is not subtle, but it isn’t inaccurate either. 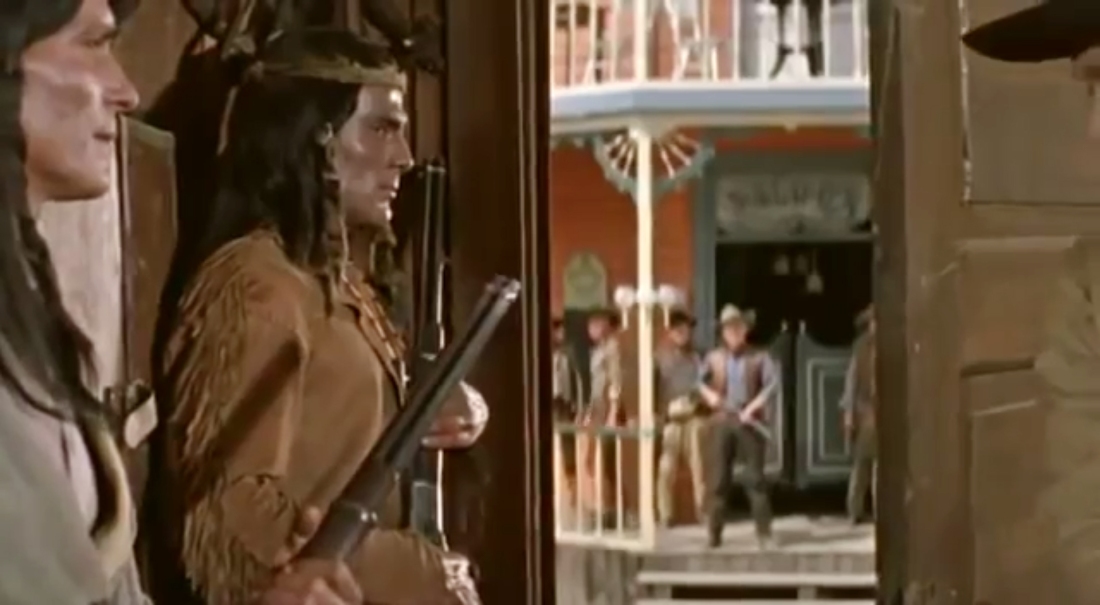 White Wolves was filmed as a joint production between DEFA and the Yugoslavian production company, Bosna Film. The film’s star is Yugoslavian, but that would have been true in any case, by the time this film was made, the Yugoslavian actor Gojko Mitić had already become DEFA’s number one Indian. Mitić got his start as a stuntman and bit-part player in the West German productions of Karl May’s novels. These films all starred the American muscleman Lex Barker as Old Shatterhand, and french actor Pierre Brice and Winnetou. Beginning with The Sons of Great Bear, Mitić left behind the small roles in West German productions in favor of starring roles on the other side of the Wall. White Wolves was his fourth East German Indianerfilm. He would go on to appear in nine more Westerns in the GDR, along with other films of every sort. Mitić has continued working after the Wall came down, returning to the stories of Karl May as Winnetou—May’s most popular character—in a series of TV movies. Mitic continues to get plenty of television work in Germany. He even played himself in an episode on SOKO Leipzig titled “Der Fall Gojko Mitic” (The Gojko Mitic Case).

White Wolves was co-directed by Konrad Petzold and Boška Bošković. Petzold took a very workmanlike approach to filmmaking. After this film, he went on to become one of the main directors of Indianerfilme at DEFA. Less information is available on Boška Bošković. It doesn’t help that he shares his name with a Slovenian soccer player. White Wolves appears to be the last film he directed. Prior to this, he had directed several shorts and two features for Lovcen Film, a Yugoslavian film company that mostly specialized in short films. He co-directed the DEFA film, Mörder auf Urlaub (The Criminal on Vacation) with Egon Günther, and received an award nomination at the 1961 Moscow International Film Festival for his film adaptation of Đorđa Lebovića’s play, Nebeski odred (Suicide Squad). Bošković died in 2003 in Belgrade, Serbia.

Character Actor Rolf Hoppe really steals the show in this film as the utterly unscrupulous James Bashaan. Hoppe has played a wide variety of roles in lifetime, from a rabbi (Go for Zucker!) to a king (Three Hazelnuts for Cinderella), but it is his performances as bad guys for which he is best remembered. He is best-known to western audiences as the evil Nazi prime minister (based on Hermann Goering) in István Szabó’s Mephisto. Hoppe is one of the few actors who suffered no decline in work after the Wende, perhaps because, thanks to Mephisto, he was already well-known in the West. Since the fall of the Wall, he has appeared in dozens of films and television shows. These days he usually plays more avuncular characters than he did in his younger days.

Like The Falcon’s Trail before it, White Wolves more strongly resembles the American-style Westerns than most of the other DEFA Indianerfilme. It includes all the elements we have come to expect in a traditional Hollywood Western (cowboys and Indians, gunfights, old locomotives, expansive landscapes), but with the perspective turned on its head. It is also grimmer than the average western, bringing it closer to the Spaghetti Westerns of the late sixties, in particular, Segio Corbucci’s The Great Silence—the grimmest western ever made (and the main inspiration for Quentin Tarantino’s The Hateful Eight). It isn’t as grim as that film, but it isn’t exactly uplifting. This is probably the main reason the film didn’t do as well at the box office as The Falcon’s Trail, but it is still a must-see for fans of the Western genre and anyone interested in East German cinema.