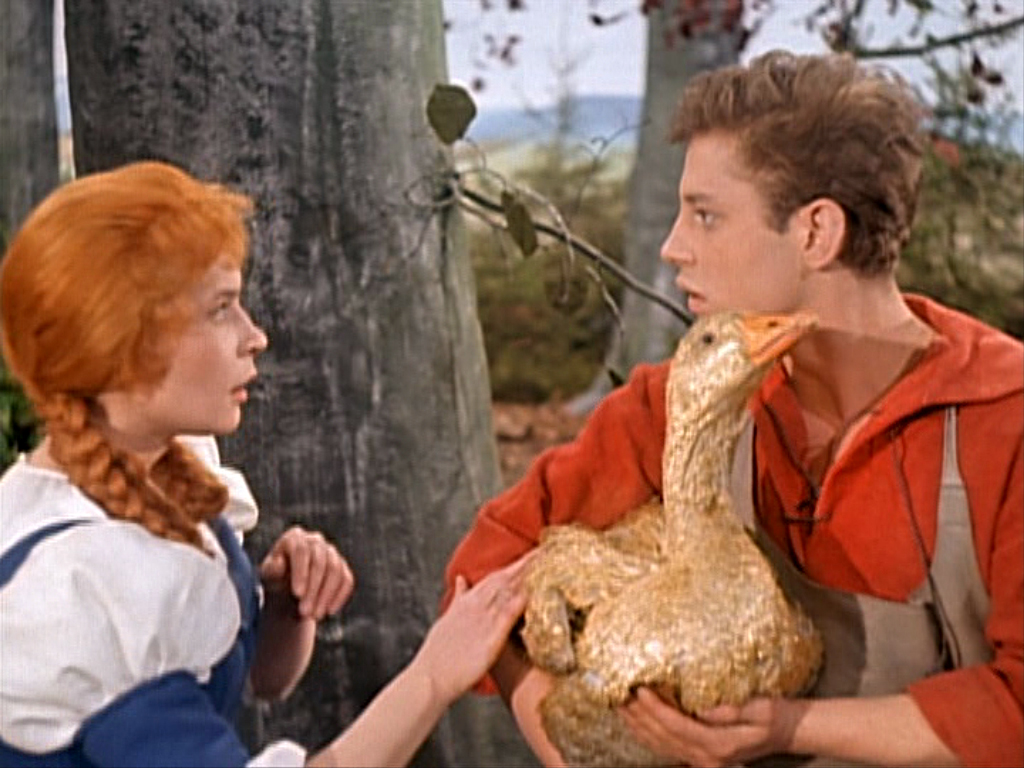 Most East German films received little if any distribution in the west. If you lived in Poland or Russia, you might see some of them pop up in theaters (particularly the Indianerfilme), but only a handful made it to the movie houses in New York and London. There were a few exceptions and the most of these belonged to that oddest of East German film genres: the Märchenfilm (fairy tale film). Märchenfilme started in East Germany with The Cold Heart (Das kalte Herz), made in 1950 by the West German director Paul Verhoeven. During those early days of DEFA and the two German republics, many West German filmmakers found themselves turning to the east to get their projects realized. The western authorities—and in particular, the United States—were in no hurry to get the German movie industry back on its feet. The Cold Heart was successful on both sides of the border and the East German authorities recognized the potential income that this particular film genre had for the state. With their common themes about the importance of helping others less fortunate than yourself and the humbling of the rich, fairy tales fit nicely within the confines of socialist ideology. Better yet, the west didn’t have a problem with these concepts when they were couched in the world of fantasy.

One of the DEFA films that made it west was The Golden Goose (Die goldene Gans), based on the fairy tale by the Brothers Grimm. The film tells the story of a young man who, because of his kindness to an old woman, is given a golden goose. When others lust after the goose’s golden feathers, they become stuck to each other in a long procession behind the young man who is heading to the castle to try and make a sad princess laugh. Lots of singing and general hilarity ensues.

Just as The Singing Ringing Tree had a strong impact on the children of Great Britain, The Golden Goose remains a vivid memory for American children from the same era. This is because the film was purchased for distribution in the U.S. by K. Gordon Murray. Called the “King of the Kiddie Matinee,” Murray was the oddest of exploitation producers. Exploitation film distribution is all about finding a niche that Hollywood is either ignoring or won’t touch, and then making or purchasing films to fill that void. For most producers—people such as David Friedman, Dwain Esper, Kroger Babb, and Louis Sonney—this meant sex, drugs, or both. Murray, on the other hand, sought revenues in European children’s films and Mexican horror movies. His formula was simple: buy a film cheaply, dub it badly, edit it substantially, and distribute it quickly. Most of the fairy tale films that Murray purchased hailed from West Germany, but one exception was DEFA’s The Golden Goose. Later, Murray recycled some of the footage from this film in his 1969 release, Santa’s Fantasy Fair. Eventually, Murray ran afoul of the IRS, and all his films were seized. He was in the process of getting them back when he died of a heart attack. Following Murray’s lead, New York distributor, Barry B. Yellen started Childhood Productions, a company exclusively devoted to kiddie films. Yellin brought more East German films to U.S. movie houses, including The Tinder Box (Das Feuerzeug) and The Brave Little Tailor (Das tapfere Schneiderlein).

The Golden Goose was directed by Siegfried Hartmann, who directed several Märchenfilme for DEFA. He got his start as an assistant director in the early fifties, working on, among other films, The Story of Little Muck. In 1959, he directed The Tinder Box, which was a hit and set him on his career as a Märchenfilm director. All of his fairy tale films are available on DVD through Icestorm Entertainment, although not all have been released in the United States.

The cinematographer was Karl Plintzner, who might be called the Leon Shamroy of East Germany. Had Plintzner lived in the United States, he would have been Frank Tashlin’s favorite cinematographer. His use of color in this film and his others, such as Silvesterpunsch (New Years Eve Punch) and The Singing Ringing Tree, is dazzling; almost to the point of excess. He is helped in this regard by costume designer Ingeborg Wilfert’s brightly colored outfits, and Georg Kranz’s and Hans-Jörg Mirr’s theatrical art direction.

Although he only composed the music for three feature films (all of them by Siegfried Hartmann), composer Siegfried Bethmann was a successful musician in East Germany who was better known for his march music than his film scores. His “Pauken unf Fanfaren” was a popular military march in East Germany, and, more recently, the Belgian trombone player Marc Meyers recorded Bethmann’s “Schottischer Whisky” (imagine “Scotland the Brave” reinterpreted as the theme for Hogan’s Heroes). Peter Snellinckx, conductor of the Royal Band of the Belgian Navy, also recorded two of Bethmann’s compositions: “Scandanavian Rhapsody” and “Hias.” From the available music, it seems as if Bethmann’s major influences were George Gershwin and Bavarian brass bands, an odd combination to be sure. Perhaps his strangest contribution to the music scene though is “Marsch der Fallschirmsportler,” a rousing paean to the joys of skydiving.

While there are other East German Märchenfilme that older viewers will find more entertaining (most notably The Singing, Ringing Tree), The Golden Goose is an congenial little film well suited to young audiences.

4 thoughts on “The Golden Goose”